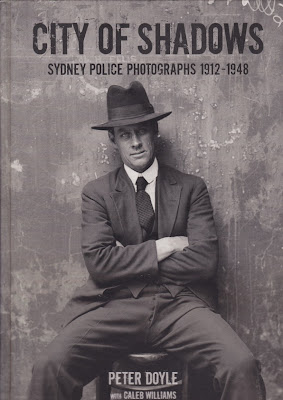 This smartly dressed chap (above) may appear to be a good, law-abiding citizen, but he is actually a dirty crook by the name of H. Ellis who gadded about Sydney in the 1920s getting up to mischief. This mug-shot was taken sometime in that decade at the Sydney Central cells, but I don't really know what his crime was, because his and many other records have been lost.
As Peter Watts, the director of the Historic Houses Trust, explains in the introduction to this curious and deeply fascinating publication, a vast collection of forensic crime photography created by the NSW Police between 1912 and 1960, was damaged in a flooded warehouse.
In the 1980s, the Trust managed to salvage ''about four tonnes of photographic material, including many glass plate negatives still in their original Kodak boxes . . . (but) sadly, none of the detective's notes or investigation files that would have provided context and explanation for the subjects depicted appeared to have survived.''
Enter crime novelist and academic Peter Doyle who sifted through the piles of photographs, decrypted messy handwriting, examined old streets and buildings, studied the Police Gazette and other publications of the day, and was then able to piece together at least some of the stories behind the 240 crime scene photos and mug-shots in this book.
So was the man above a con-man, moonshiner, abortionist or murderer?
We might never know, but as Mr Watts writes, the photographs still manage to ''come alive in their own right'' and are also a reminder that ''photography as a medium of visual communication possesses a deep and lasting power to move, entrance and captivate, even when produced for a purely bureaucratic or investigative purpose with no thought to the reactions of posterity.''
Here is a small selection of photographs and captions from the book, including ones shot in Darlinghurst, with thanks to Master Tailor Russell Wade for letting me borrow his treasured and much-read copy.
I thought it would be a timely post, considering the razor gangs of 1920-30s Darlinghurst, detailed in Larry Writer's excellent book, Razor, are going to be brought to life again in the latest television series of Underbelly. As an aside, I would really like a bit-part or to appear as an extra in this new series. I have the wardrobe ready. 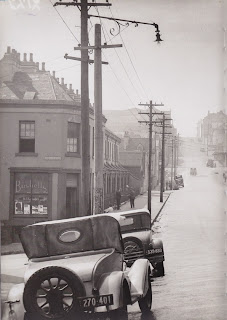 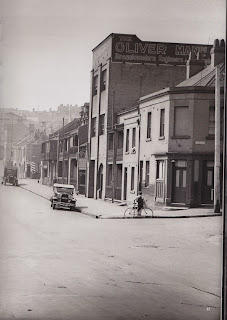 Liverpool Street, Darlinghurst, near the corner of Riley Street, looking east, circa 1930.
''The police interest seems to centre on one of the terrace houses on the left, in the Riley to Crown Street block. Details unknown but the entire series, of which this photo is a part, has the pronounced sombre ambiance of a murder scene.'' 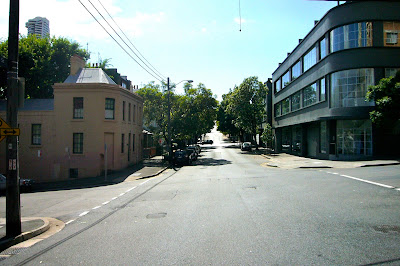 The same street scene on December 25, 2010: no murder, more trees, Horizon building.
The 1930s murder appears to have taken place at a set of terraces, now heritage-listed, which I wrote about here. 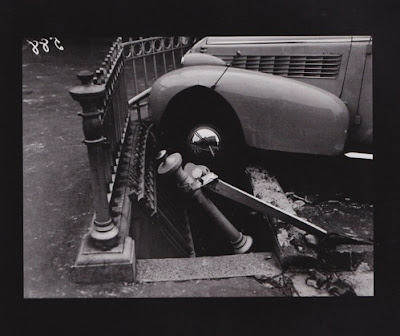 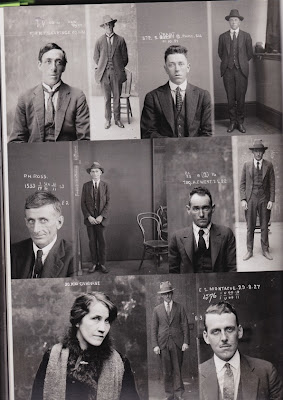 The mug-shot of Phillip Henry Ross, in the middle row, left, was taken at Darlinghurst Police Station in the late 1920s. 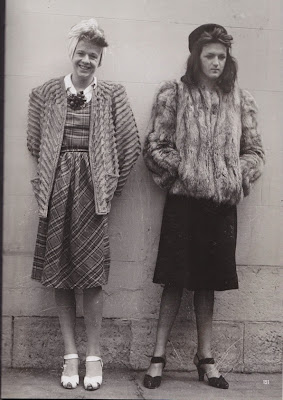 Uninscribed . . .
''. . . but a similar photograph of this pair appears in Truth, 14 June 1942. They are Neville McQuade, 18, and Lewis Stanley Keith, 19, at North Sydney Police Court on charges of being idle and disorderly persons, having insufficient means of support and with having goods in their possession believed to be stolen. After being remanded in custody for a week, both were released on bonds.
Of the photographs, McQuade later said to a Truth correspondent: 'We were bundled out of the police cell and snapped immediately. My friend and I had no chance to fix our hair or arrange our make-up. We were half asleep and my turban was on the wrong side'.''
I suspect this pair (while arrested on the North Shore) may have frequented the Darlinghurst and Kings Cross area. 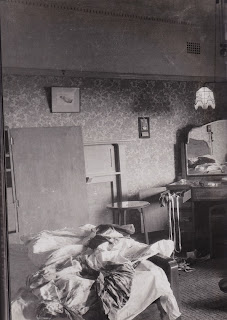 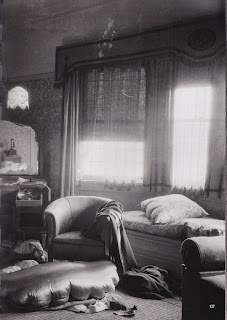 Crime Scene: 1930s, details unknown.
I just love the dressing table, twin lights, club chair and satin angel wings cushion. There are many photographs like this in the book, including a great number with the murder victim or corpse in situ. As the details are unknown, I wonder if the apartments and homes still exist, and if the people who live in them now are aware of their gruesome history. 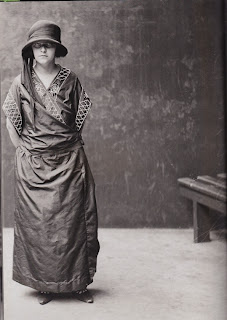 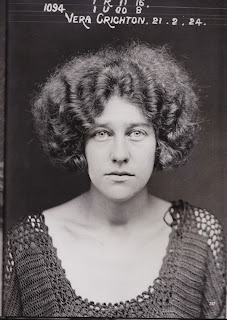 Nancy Cowman, 19, and Vera Crichton, 23. Sydney Central cells, February 21, 1924.
''Both were listed in the Police Gazette, 24 March, 1924, charged, along with three others, with 'conspiring to procure a miscarriage' on a third woman. Cowman (alias Divvers, Denvers,) was eventually acquitted; Crichton was 'bound over to appear for sentence if called upon within three years'. Their three male co-accused received sentences of 12 and 18 months hard labour.''
Very fashionable abortionists, don't you think? 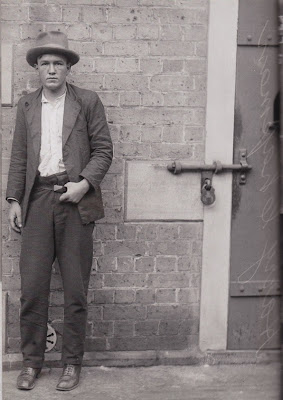 Harry Chapman, June 30, 1924.
''Arrested in June 1924 for breaking and entering a dwelling-house and stealing articles, valued at 2 pounds 16 shillings, 6d. In September that year, aged 19, he was arrested again and charged with stealing a motorcyle and sidecar (value 175 pounds) and a till containing money (value 17 shillings, 6d), in league with Harold ('Tarlow') Tarlington, 15, and Alfred Fitch, 17. Tarlington went on to become a well-known criminal and was eventually shot dead in St Peters by Myles Henry 'Face' McKeon, who was himself later shot dead in Chippendale. Chapman received two years hard labour for motorcycle theft.''

See, no matter how handsome Chapman was - and how well he could strike a pose - this caption proves that crime never pays.
*
City of Shadows
Sydney Police Photographs 1912-1948
By Peter Doyle
With Caleb Williams
Published by the Historic Houses Trust 2005,
in association with the exhibition, City of Shadows,
held at the Justice and Police Museum, November 2005 to February 2007.
Hardback $65
Posted by Unknown at 12:00 AM

Fantastic blog post. I've just done some sketches based on photographs in City of Shadows. I've put a link to your post as it gives people more details on the book.