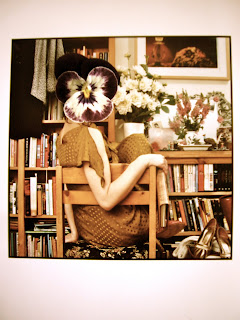 I first moved to Darlinghurst in 2002. I had been living in share-houses in East Redfern and Surry Hills but so desperately wanted a place of my own. The reason for selecting Darlinghurst was because it had, and still has, so many more studio apartments than Surry Hills or Redfern, which have mostly terrace houses and one- and two-bedroom apartments.
I only looked at one studio apartment in Darlinghurst and I was smitten. It was at 7/40 Hardie Street, next door to Flash Auto Repairs - run by the charming Peter - and just a skip away from the Darlo Bar, Green Park Hotel and the 311 bus stop.
The picture above is one of the few photographs I have of apartment number seven and was taken on a special day (face flowered for privacy) and here is a photograph of 40 Hardie Street (to the left) that I took the other day: 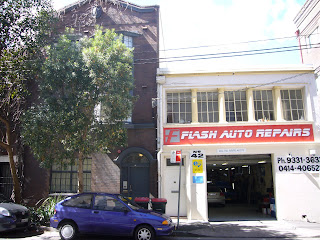 The rent for apartment number seven was $170 a week and $5 less than I was paying in the share-house. It was small but I didn't know any better. The kitchen was an afterthought, the bathroom had a sliding-door and the windows looked out to brick-walls and a light-well, but I loved it because it was my own.
The 12-room apartment building sold for $1.56 million two years after I moved in and was purchased by three young, and very clever, men (Arthur, Lans and Sava). They were good landlords and never put the rent up. One of them even kindly came to remove a huntsman spider that had made itself a home in the corner of the room above my bed.
I lived at number seven for five glorious years, hosting cosy (squashy) dinner parties for six, befriending the local cats and falling in love with the neighbourhood.
But my book and dress collection was steadily growing and it was clear I needed more space, so when the apartment next door - number eight - became available, I asked if I could have it. The following week I carried all my possessions about 2m to the place next door.
Number eight was a dream. It had beautiful windows that looked out on to Hayden Lane and to the rear of French restaurant Sel e Poivre, so that the kitchen staff's musical Gallic accents came floating up into my home. Another positive was that the apartment also had a bathtub.
Here is a picture of number eight: 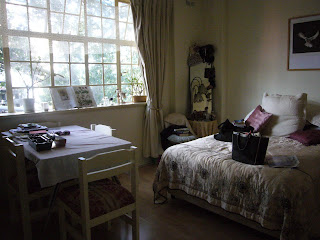 I loved that apartment to death and even had it painted a gorgeous shade of yummy, rich clotted-cream before I moved in. I also installed a paper blind in the kitchen and thick-cream, light-blocking curtains in the main room. Sadly I wasn't to stay there for very long.
After just six months of living in luxury I accepted a job far, far away and in April 2007 moved out of Darlinghurst and gave up number eight for someone else.
Here is a picture of my last day at number eight, when I had to hand over the keys: 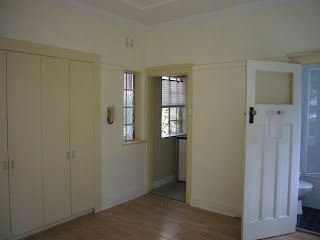 To be honest, I was actually glad to be moving out of Darlinghurst and Sydney. I was frustrated by my job and needed to move away from the stinky city I had grown to hate. I especially loathed the excessive planting of Plane trees, which shed fine, pollen-coated hairs every Spring and cause so much grief for my poor throat and nose. I was tired of hearing about rising property prices and the fact that every time I stepped out the door, life seemed to cost me $50.
So I moved to the seaside where I had ocean views, a car-space and a verandah for only $170 a week - 1990s prices!
For the first 18 months I was fine. I returned to Darlinghurst and the surrounding suburbs regularly to see my then lover-boy and other friends and it was almost as if I had never left.
Almost. After that first honeymoon phase I began to miss my old neighbourhood. I missed walking the streets at night, the noise and the characters.
There was one particular scene of the neighbourhood that I would replay in my head. It was walking home at dusk from Taylor Square and then alongside the National Art School, towards Burton Street. There would be a sense of peace about the neighbourhood as fruit bats in their thousands flew overhead from the Royal Botanic Gardens to search for their evening feast, while the city's workers also made their way home for dinner.
The strongest, most memorable image of that walk though, is of a large gothic-looking house on the corner of Forbes and Burton Streets, which would be in silhouette against the dying day. I loved that house at that time of day. It thrilled me for some reason. I'm sure I have a photograph of it somewhere too. (I was pleased to see today that the house is still there. Although it looks like the Caritas psychiatric hospital across the road is soon to be demolished to make way for a fancy apartment block - more on that another day.)
So anyway, I missed old Darlo and badly wanted to be back in number eight, as if the whole move out of Sydney had never happened.
I set about plotting my return and in September last year began looking at Darlinghurst studios and discovered that rents had gone up by $100 a week in the 2.5 years I was gone. It was sad, but there are worse things to spend your money on.
I trawled through the rental ads on Domain.com every waking hour for weeks and it was on a Saturday morning when I finally found what I was looking for. I am very picky. It had to be a 1930s-40s build, so that I would have high ceilings and none of that porridgey stuff they started spraying on ceilings in the 60s. It also had to have light: don't want to be depressed. And polished floors. A built in wardrobe (I don't want to own another piece of furniture). And a bathtub would be dandy too.
The place on Royston Street appeared to have everything. I dashed to the real estate agency as soon as they opened up shop and put in an application, which was approved by Sunday night and on Tuesday I inspected it and the keys were in my hands.
Here is a picture of Royston Street: 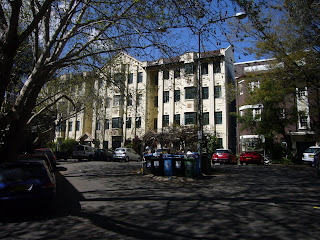 It is not the greatest street in Darlinghurst. One has to hike up Oporto Hill (or Vomit Hill, as it appears on Sunday mornings) to reach it, and it is surrounded by the dastardly plane trees, but it will do for now. Secretly, I still want number eight back.
Here is a picture of the view from my sunroom across the rooftops of Paddington with St Vincent's Hospital to the right: 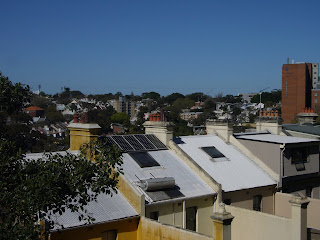 Here is a picture of the view from my kitchen window, down to Rushcutters Bay and over to Darling Point. I can actually see the Moran family's mansion, Swifts. 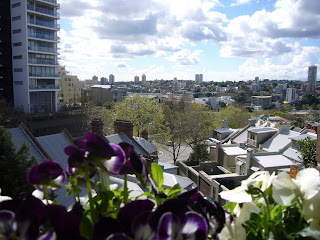 
UPDATE: October 2011: I am now employed by the City of Sydney and feel that I should declare my interest here in case I should ever by accused of bias.
I have just left an industry that I loved for 10 years to embark on this new adventure and I am very excited about my new position at Town Hall, especially because I will be able to pop down to the City of Sydney Archives in my lunch breaks. And hopefully this can only be a good thing for my My Darling Darlinghurst.
Opinions, thoughts and adventures will remain my own and I still make no money from this blog; it has and always will be a labour of love.
Posted by Violet Tingle at 12:50 AM

And now do you miss the sounds of the waves crashing?

Not really, but I so miss having a veranda with a little garden. And our fun dress-ups and dinner parties!

Violet Tingle, I share the same passion! A Darlo resident for 11 years now (in the Horizon, but I desperately want to find a 1940's apartment with a view and a sunroom!). Do you have a facebook page where you put the links to new blog entries? Easiest way for me to keep track :)

Hi Christina, What's the Horizon like from the inside? I have a Facebook page, which you can find here: http://www.facebook.com/pages/My-Darling-Darlinghurst/158794977488088
Best, Violet

Violet Tingle, I saw your blog when I googled my home address by a chance. I live in the building where you lived before!! My room is actually in the similar setting as yours. How bizarre!?
I love this place very much. But, I am about to move out. I think I will miss darlo and continuing come back sometimes.
:)
VH

Hi VH, isn't that funny. I love that building. Is the old man still downstairs? He used to always water the plants with a drinking glass, so one Christmas I left a small watering can and a card outside his door. Good luck with your new adventures. Violet x

just about to move to 40 hardie. Good to know its looked after

Number 40 is a lovely building, Anonymous, and is actually called Meriden. You can read a little more about it here: http://mydarlingdarlinghurst.blogspot.com.au/search/label/Meriden

your story great similiar to mine except I haven't had the oppportunity to go back maybe when I retire!

Hi Violet! I love your last article about missing Ralf the Cat - I've also had past street cat loves: its a tense battle between possesion and obsession - the cat is a transient lover, not kept by anyone, take it for what it is.

I love Darlinghurst too but am a Newtown/Camperdown local. Would love to live there and cycle to my work in North Sydney :) How is your role in City of Sydney? Do you mind me asking how you fill your days now?