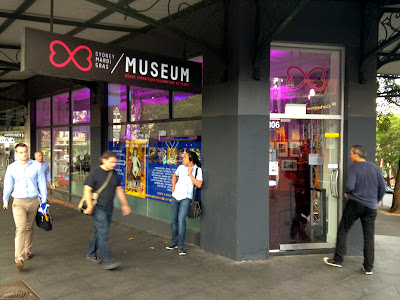 The festive season has only just ended but the party season has already begun in Darlinghurst, following the launch last Friday of the Sydney Mardi Gras Festival when the rainbow flag was raised above Sydney Town Hall.
This year the festival is marking its 35th anniversary with the 'Generations of Love' theme, a packed program of events and a temporary Sydney Mardi Gras Museum on Oxford Street, which has been a long-time coming. 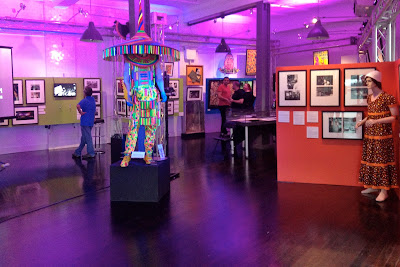 The museum has some great window displays styled like a drag queen's dressing room, with shiny costumes, feather boas and mirrors.
And I finally had a moment to pop in last night and take a look.
Inside, the museum is laid out chronologically and includes some fantastic archival photographs, memorabilia including posters and artwork, and a rainbow-coloured Ron Muncaster costume in the centre of the room. 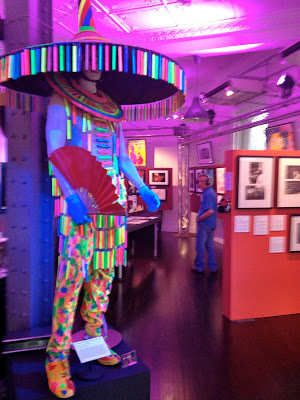 I'm a big fan of Mr Muncaster for his daring and creative costumes, which in the early years of Mardi Gras helped set its festive and flamboyant tone.
Mr Muncaster lives just down the road on Crown Street and I have had the honour of being invited to peruse his massive archives of costumes that fill the spare rooms in his large terrace house.
He also loaned me one once when I had to go to a costume party and I may even be putting it on again soon to attend the launch of his new joint exhibition, with his partner Craig Craig, at the TAP Gallery next week.
That may be another story. But back to the museum. 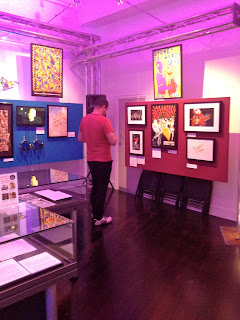 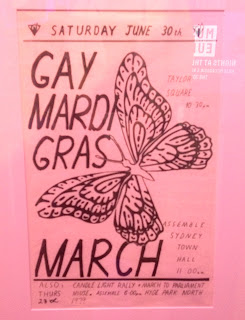 The exhibition traces the roots of Sydney Mardi Gras, which began as a march down Oxford Street for international gay solidarity in 1978. The museum includes the original request from a group in San Francisco who asked for Sydneysiders to show their support for equality. 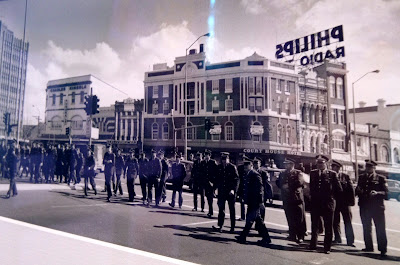 That first march involved more than 500 people and resulted in 53 people being arrested when the march was broken up by police. The museum photograph above shows the police response to the march at Taylor Square in 1978. 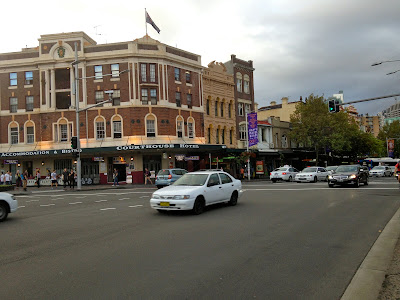 That same view today shows just how much things have changed in the past 35 years with the same street now lined with Mardi Gras banners and rainbow flags. And since then the parade has grown to become more of a celebration of our diverse sexuality. 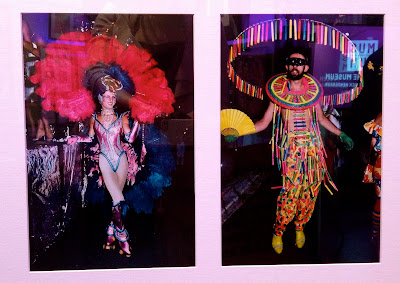 One of the highlights of the museum are the original artworks and photographs, which illustrate how a simple drawing of a rosella . . . 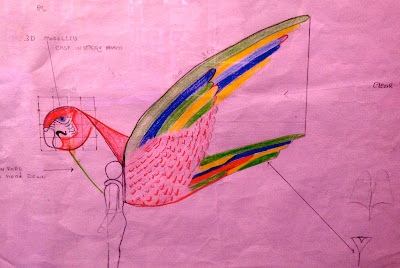 . . . is the inspiration for a marvellous costume: 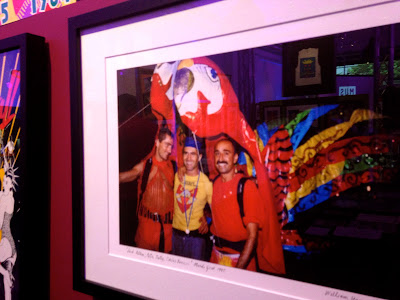 It's all these great artifacts, like the Dykes on Bikes badges below, that really personalise the museum and bring the exhibition to life. 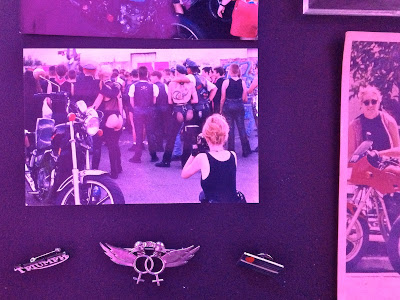 While this is only a temporary museum, hopefully next year Sydney Mardi Gras will be able to open the doors to a permanent exhibition and museum space that can attract people all year round.
TONIGHT the museum is hosting a talk by photographer and Mardi Gras chronicler William Yang, who will be discussing the 1980s.
The guest speaker series continues on Monday 18 February with a talk by photographer C. Moore Hardy and on Tuesday 19 February with a discussion by Ron Muncaster on the 90s.
Tickets cost $35 plus booking fee and can be purchased from the Sydney Mardi Gras website.
The museum is open daily throughout the festival and is a must-see for all Sydneysiders. 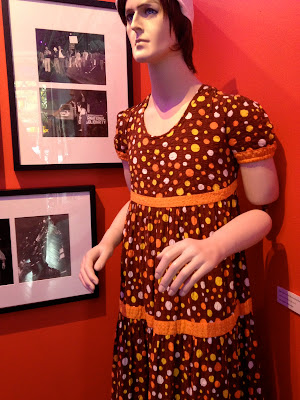 Across the Border: Kings Cross: Retailers: The Boomerang School 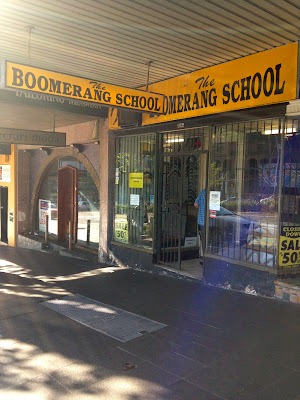 I was walking home from work yesterday up William Street and as I always do, glanced in the windows of The Boomerang School.
I have long been fascinated by this little shop with its walls lined with boomerangs and Aboriginal art on canvas, so it was sad to see 'closing down' signs in the windows. 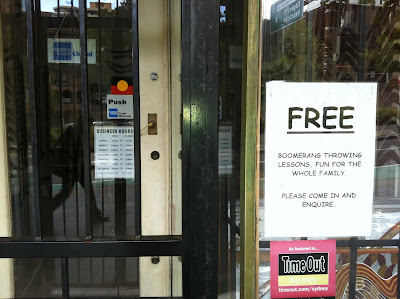 Normally there's just a sign in the window advertising free 'fun for the whole family' boomerang throwing lessons.
Boomerangs must be the most widely known Indigenous hunting tool, most likely because children love the idea of throwing something that spins around and returns, while tourists to Australia often buy boomerangs as a souvenir of their travels.
And that's probably why this shop sprang up 50 years ago. Yep, 50 years. I only know this because as I stopped to look at the signs, the owner was locking up the front door and so we had a quick chat. 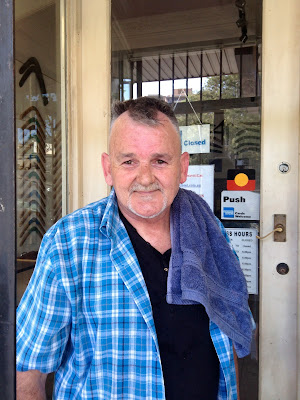 Frank, above, is the son-in-law of the original owner Duncan MacLennan, who opened The Boomerang School in the 1960s.
Duncan still runs the school with his daughter Belinda and Frank, but business has been tough in recent years.
Frank said that because most of the big hotels in the area have closed in the past decade or so (the Rex, Top of the Town, Sebel Town House and Hyatt Kingsgate come to mind) there aren't so many tourists seeking boomerang lessons or souvenirs.
And the backpackers, he said, prefer to spend their money on other things.
Frank said they'll make a final decision in the next three weeks on whether to shut the shop. 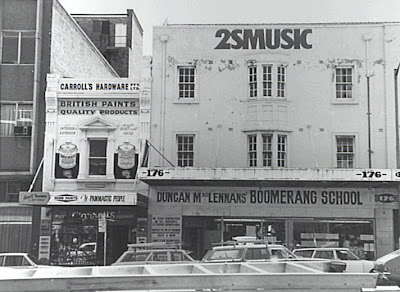 The Boomerang School in 1975, courtesy City of Sydney Archives. Note Carroll's Hardware, which just moved to new premises on William Street, was once right next door.

I wish now I had written about The Boomerang School earlier and perhaps encouraged people to visit or take part in one of their free boomerang throwing lessons, which are held at Rushcutters Bay Park every Tuesday.
It's not just sad that this family will be closing shop after five decades in business, it's also sad for the area, which will lose such a unique business. And I dread to think what could replace it. Kebab shop? Convenience store?
Anyway, if you have been a silent and secret admirer like me, why not go into the shop and say hello or buy one of their boomerangs, which are all made in Australia by Aboriginal and Torres Strait Islander artists. 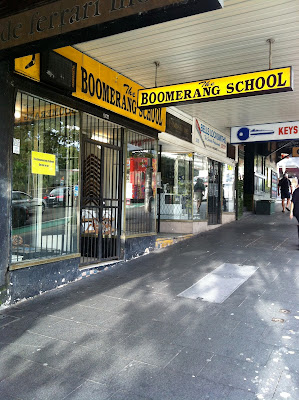 Email ThisBlogThis!Share to TwitterShare to FacebookShare to Pinterest
Labels: Across the Border, Kings Cross, Retailers, The Boomerang School, William Street

Across the Border: Kings Cross: Art and Culture: Mum's In 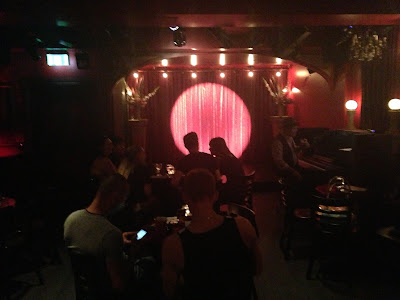 Fancy a Devonshire (Street) Wake? Bit of Blood on the Strand (Hotel)? Or do you want to share some Darlinghurst Push?
I didn't partake of any of these excellent-sounding vodka cocktails, but they're on the exclusive menu at the Kings Cross Hotel's Bordello Theatre, where the cult theatre show, Mum's In, is playing on Sundays at 5pm. 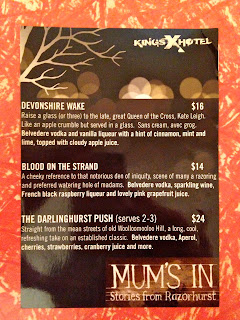 You may recall I saw Mum's In, and wrote about it, when it premiered at Heffron Hall back in June 2011. And still, two years later, actor Vashti Hughes' amazing one-woman show set during the 'Razorhurst' years is running.
But this time, it's in its rightful home, a pub. And only for another two weeks!
I had been planning on going to see the show again, which has developed since I saw it last, and when Vashti offered me a couple of tickets for free, I put on my best 30s frock, met my dear friend Milly Fisher and we slunk on down to the pub on a Sunday. 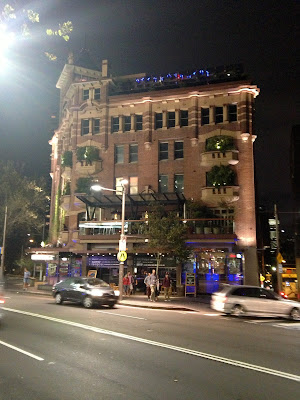 Mum's In is a drinking show. That means you can order drinks from the roaming barmaid while the performance takes place, or even step up and order at the bar (but do it discreetly!).
Drinking during the show is appropriate, too, considering it's focused on that period in Sydney's history when Darlinghurst and surrounding suburbs were home to many illegal grog dens where people could buy under-the-counter alcohol after the pubs had closed at 6pm. 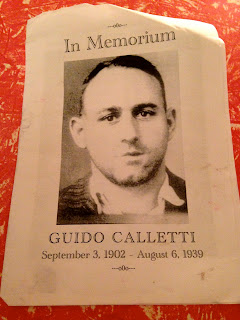 It's hard to imagine pubs closing at 6pm, but Vashti Hughes brings to life the era and the characters that dominated the illegal booze scene, such as Tilly Devine, Kate Leigh and gangster Guido Calletti (whose wake the show is based around). 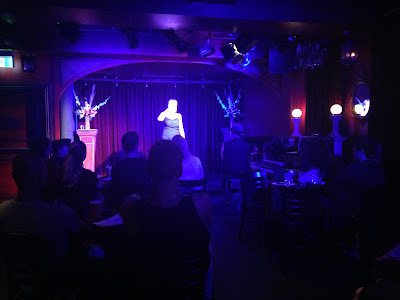 The Kings Cross Hotel is a great venue and the producers of Mum's In have made clever use of the space. We take the lift straight up to the level five rooftop and are met by a dubious-looking character, Slim Jim, who asks for the secret password and then draws an L on the palm of our hands, allowing us entry to the show. 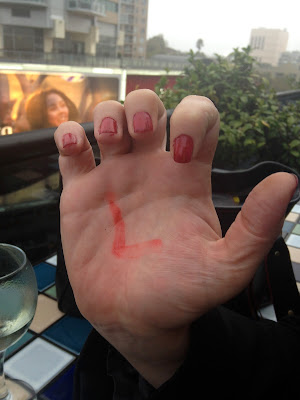 Milly's red talons nicely matched the L and a quick glass of plonk before the show was a good match, too, for the fabulous view (of the 311 bus).
We loved the rooftop so much, we returned during the intermission. 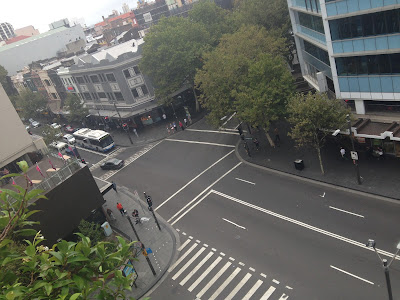 Slim Jim rings an old brass bell and we troop downstairs and take a seat in the intimate Bordello Theatre, which is all red velvet curtains, gilt mirrors and shadows. 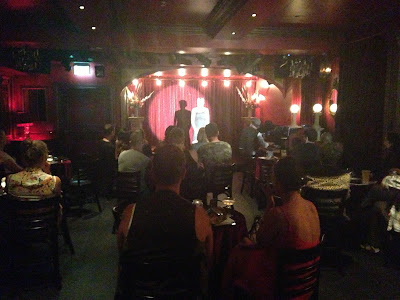 Vashti literally jumps, slithers and flits between five characters: Tilly and Kate, swaggering Italian Guido, as well as Frank Green - a lethal gunman - and Nellie Cameron, a North Shore schoolgirl who ran away to Kings Cross to become a prostitute (as you do).
All the character's featured in Larry Writer's 2001 true-crime history book, Razor, which is required reading for all residents of the 2010 and 2011 postcodes.
And this show really should be seen by anyone who has a fleeting interest in the deadly and debaucherous days of 1920s and 30s Darlinghurst when the streets were ruled by thugs with deadly razor weapons.
If you haven't seen it yet, make sure you get tickets as there are only two shows left before the season ends! 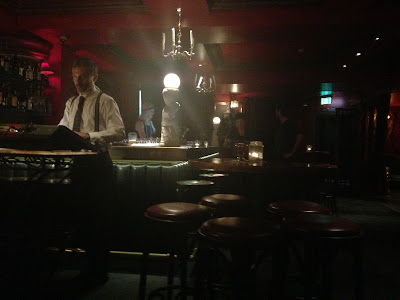