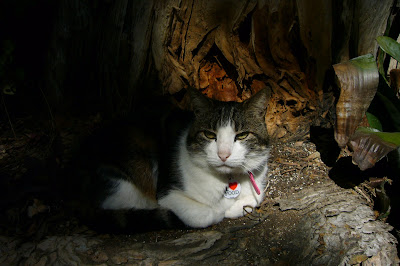 I've been a bit quiet on the blogging front recently and that's mainly because I've been feeling a bit blurgh. I've wasted far too much time watching television series on my laptop and being generally unproductive and uninspired. Adding to this general malaise is the fact that my muse appears to have left the neighbourhood. 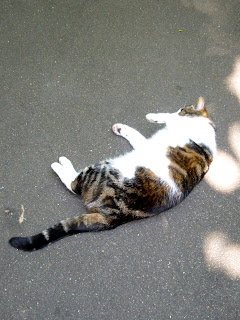 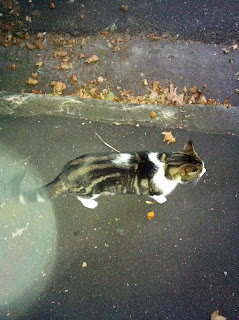 I first met Ralf the cat in 2010 when I moved back to Darlinghurst and set up house in Royston Street. I didn't know his name for a long time, but would often stop with him to pat and chat. 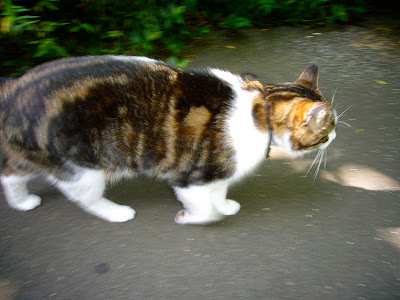 It seemed that every time I went outside, Ralf was hanging about somewhere, a regular presence in the street. 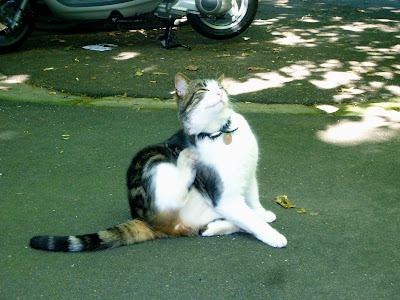 You didn't have to search hard to find him: just look for the sunniest, warmest spot in the street and Ralf would be there. 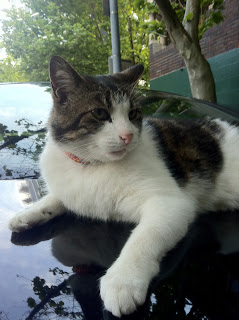 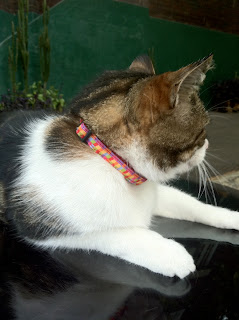 During the day Ralf would sleep in whatever sunny pocket he could find, whether it was on a car, in a garden bed or even in the middle of the road. 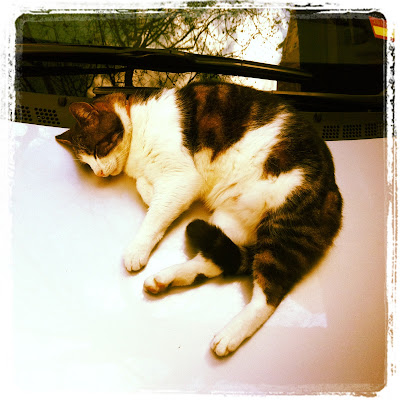 But cars were a particular favourite, especially when the motor was still warm.
I once watched as a driver returned to their car to find Ralf asleep on the bonnet. The driver sat behind the wheel and started the engine, but Ralf didn't move. He simply woke slowly from his slumber, looked at the driver and sat there staring. 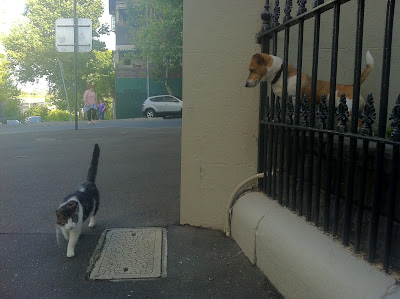 One time I saw Ralf taunting Digger the dog on Craigend Street. (Digger was also a regular street character, but moved out of the area earlier this year after nipping one of the children in his house.)
Digger was madly barking behind his fence at the cheeky cat who would dare come near his home. Ralf strolled by, barely giving the dog a glance. 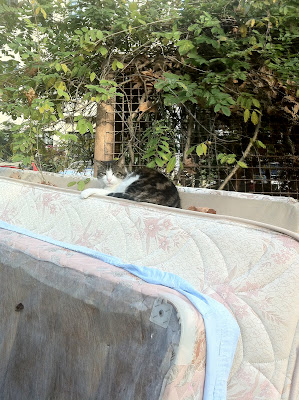 I admired this about Ralf, his carefree, fearless, don't give a damn attitude and often wished I could be the same.
If Ralf was crossing the road and a car came along, he wouldn't run to get out of the way, but just continue sauntering on with his tail in the air.
If you stopped and gave him pats and he purred and you thought that you had won him over for life, he would then completely ignore you the next day.
He just had that way about him. And because he was so difficult to win over, it made me even more determined to be his friend. 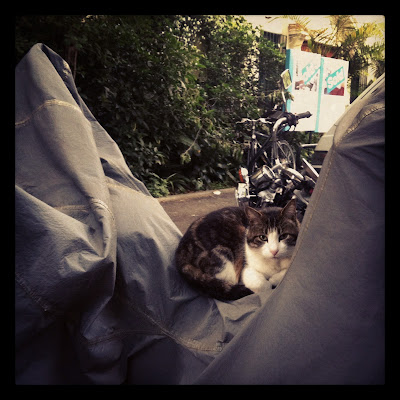 So no matter where I was going, or even if I was running late, I always made sure to stop and say hello to Ralf, give him a rub under his neck and pat the dust and malting fur off his back. 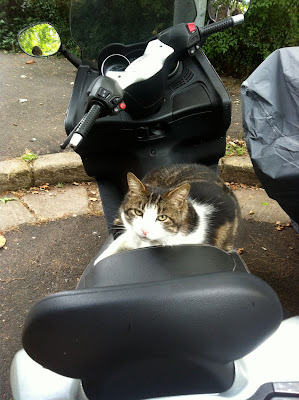 During these days of wooing him, I often wondered where Ralf lived.
Once I had seen him jump out the ground floor bathroom window of a neighbouring apartment block. Another time, I saw him go into the building of the man with the umbrella, who lives in my street.
Other times I spotted Ralf loitering around on Craigend Street and as far away as the little park on Nimrod Street. So he may not have lived in Royston Street at all. 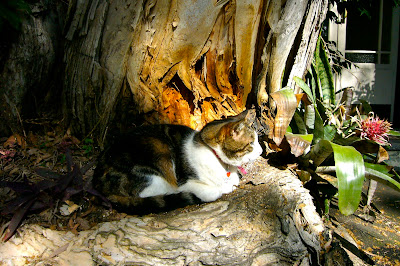 Ralf soon became familiar with my attentions and the way I would call out, 'Ralf!' in a sort of loud, breathy whisper when I saw him. And it seemed his attitude towards me started to soften. One night, while coming home late, I saw him sitting on the bonnet of a large 4WD and just by habit called out his name: 'Ralf!'
Ralf leapt off the car and ran towards me where he was greeted by his usual pats.
Then as I said goodbye and walked towards my home, he followed me, right inside the door, up the stairs and into my apartment. 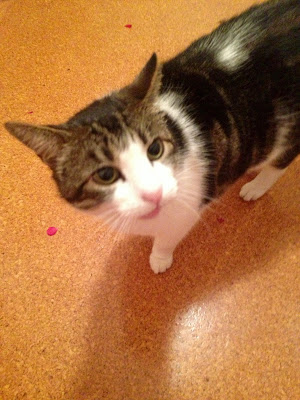 He soon became a regular guest. 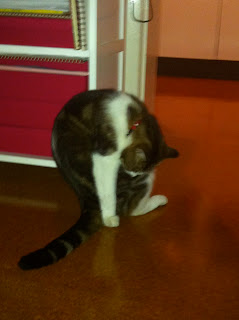 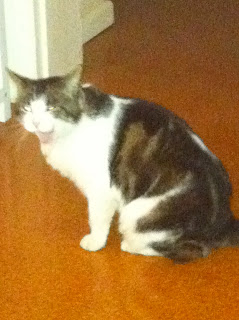 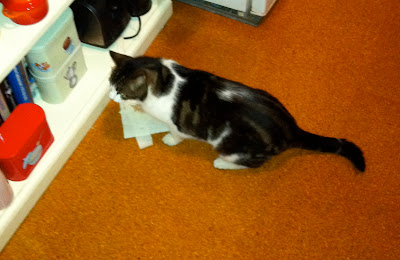 In my apartment, I would place a dish on the kitchen floor and feed him cheese and ham and milk and whatever I could find of interest to him in the fridge.
I eventually started buying little packets of Dine cat food from the supermarket and always made sure I had ample supply in case Ralf should visit. 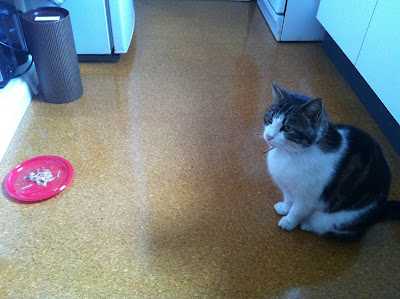 He was rather picky about what he ate and would occasionally refuse to eat the new Dine flavour I had bought him, such as Turkey in a Delicious Gravy or Country Chicken.
When that happened he would just sit in the kitchen expecting me to dish something else up.
I refused to pander to this behaviour and would just ignore him.
But it didn't happen often, as Ralf mostly had a ferocious appetite - which only added to the mystery of his living arrangements.
Did anyone feed him regularly? Where did he go when he wasn't in the street?
Yet despite his apparent independence, he was always wearing a different new fashionable collar, strung with a metal circle engraved with his name. So clearly he had a home somewhere.
Once he had eaten his fill, Ralf would stand by my front door, waiting to be let back out into the street.
At first, the visits didn't last long. 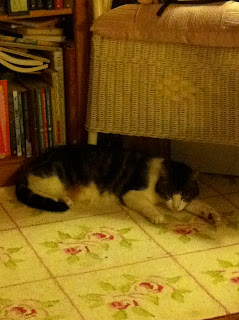 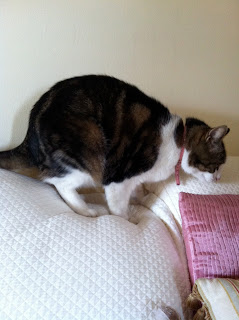 But soon, Ralf began to make himself at home.
Instead of standing at the front door when he finished eating, he would stay awhile and keep me company.
I'll never forget the day when I was lying on my bed reading and he climbed onto my back, padded around to make himself comfortable and then fell asleep.
It was a rather uncomfortable 10 minutes, but his presence was still a comfort to me nonetheless. 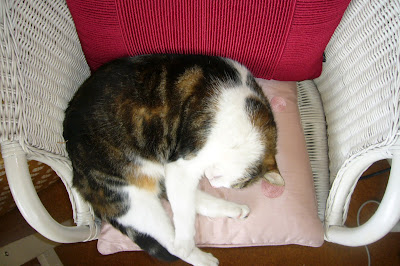 One day I saw the man with an umbrella talking to Ralf, so I went up and asked him if he was his owner.
The man said "No, Ralf just comes up to eat sometimes. He visits a few different people in the street."
"I think he lives in that apartment over there," the man said, waving to the place where I'd seen Ralf emerge from the bathroom window.
So Ralf really did have a home. And I wasn't his only friend. 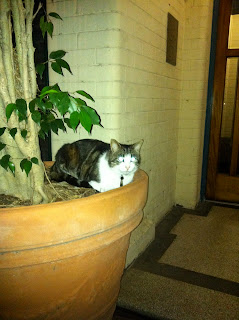 Still, I liked to think that Ralf preferred me best, especially when I returned home one day and found him waiting for me in the pot plant outside my door, showing off his latest collar. 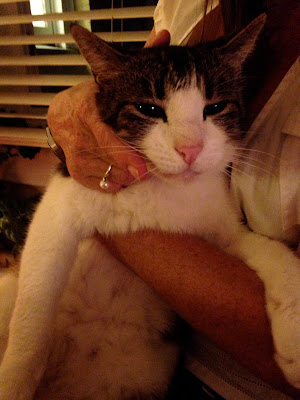 The last time Ralf came to my apartment was on 23 March this year.
It was a Saturday night and I had a friend over and Ralf joined us for dinner.
He didn't visit long, despite us imploring him to stay. He just stood by the front door and waited for me to let him out.
About a week after that I saw him on Nimrod Street at night, walking towards the little park that opens on to Caldwell Street. I called 'Ralf!' but he didn't respond and I had the feeling that he didn't want to chat or be patted. In fact, he practically scampered off, as if he didn't know me.
I shrugged my shoulders and went home alone.
I didn't know then that it would be the last time I saw him. 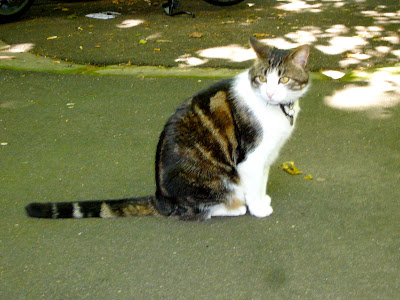 It has been two months now and there has been no sign of Ralf.
There's no cat lounging on bonnets or lurking in bushes. No cat to pat and chat, no cat to call out to, and no cat to follow me home.
Royston Street just isn't the same, it almost feels dead without his presence.
At first I thought he had maybe gone on a short trip away, as his disappearance coincided with the school holidays. I would arrive home in hope, expecting to see his furry face.
But I have now accepted that he is gone for good.
I often wonder about him and where he is living.
Is he out exploring a new neighbourhood? Or is he trapped in an apartment, with no outside access?
Is he well fed? Is he happy? Has he made new friends?
I may never know, but I'll always keep a small packet of Dine in the cupboard in case he returns.
Posted by Violet Tingle at 12:00 AM 11 comments