This poster was pasted up at Taylor Square. It's your classic 'Lost Cat' poster, except the choice of pet photography is rather interesting. Someone suggested the cat wouldn't be hard to find with its 'demonic' eyes. Has anyone seen this flashlight-eye feline?

PS. In a bid to explore new blogging frontiers, I'm writing this post on that new whiz-bang mobile phone technology, which may also add a certain weird quality to the format. Basically, it won't allow me to put the pic at the top of the post! Any hints? 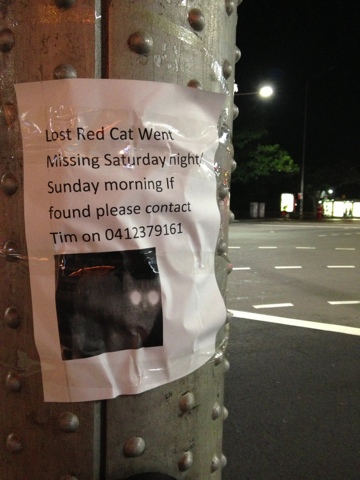 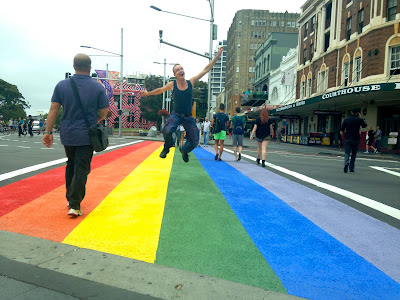 There was disappointing news this morning that the rainbow crossing at Taylor Square was ripped out last night by the NSW Government.
The bright, vivid colours - and what they represented - were such a welcome addition to Oxford Street and really brought the road to life, making it a destination for residents and tourists.
The crossing was put in place by the City of Sydney to mark the 35th anniversary of Mardi Gras in March.
But the state government refused to let it remain due to safety concerns and removed it at 10pm last night.
It's so sad that it's now gone and is just a memory.
You can read news stories about its removal here, here and here.
RIP rainbow crossing.
Posted by Violet Tingle at 12:00 AM 2 comments