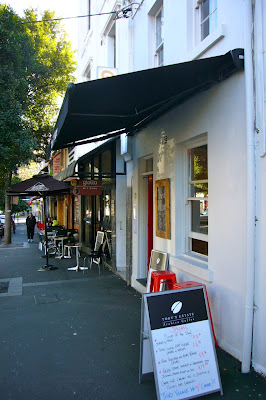 When I spoke to a neighbourhood shopkeeper the other day about how I recently went to the Third Village cafe in Darlinghurst's Italian region, the first thing they said to me was, ''Did you see the chef's tongue?''
It was an odd question, but even stranger was the shopkeeper's description of this tongue. And no, it's not a piercing. I won't go into details either, you'll simply have to go in to Third Village and ask the chef to show you his tongue. I dare you. And please, pretty please, do report back. 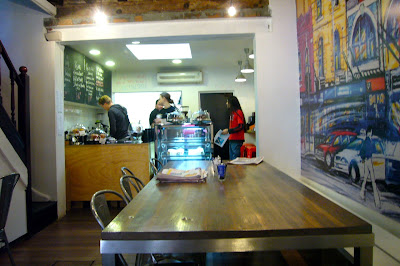 Anyway, with Ruby Molteno back in town after adventures abroad, I met up with her last week at the Third Village on Stanley Street. This little cafe opened in January by a Swiss couple called Eva and Benn and is so named because according to their menu, they support world aid projects:
''Third Village is not just a cool place to go, it is a place that connects you to the developing world through our developing social initiatives.
''In addition we only use coffee sourced in a socially, ethically and environmentally responsible way to improve the methods and rewards for growing coffee, tea and cocoa in developing countries around the world."
I don't know the specifics of which world aid projects they support, but I do know that back in January when floods ravaged parts of Queensland, Third Village donated the proceeds of their Muffin of the Week (mixed forest berry) to the Premier's Disaster Relief Appeal. I hope they sold lots of muffins. 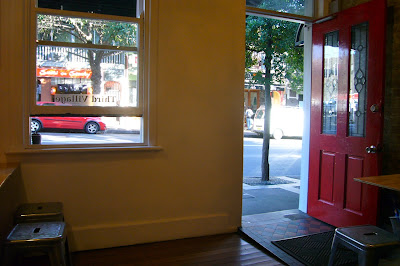 Third Village is a fairly small space with seating for about 20 people. I hope they have applied for outdoor seating, because part of the appeal of Stanley Street is sitting on the footpath and watching the world go by, which is one of the reasons I still often go to Bill and Toni's about three doors down (the other reason is for their excellent pinball machines).
One entire wall of Third Village is covered in two massive murals by the lovely Potts Point artist Gary McEwan and they look quite impressive, despite my lazy photograph: 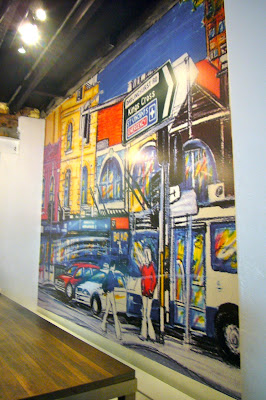 The Autumn lunch menu (even though it's definitely Winter) ranges in price from $7.90 for a cheese and tomato sandwich, to $17.95 for a rib-eye steak sandwich with caramelised onions, roast zucchini, tomato, rocket, avocado and aioli on Sonoma sourdough. Along the way there is also a soup of the day with the same bread ($12.90), a beef burger with beetroot, onion, lettuce, tomato, cheese and aioli, served with oven baked potatoes ($16.95), as well as an Asian style salad with coconut milk-marinated chicken, spinach, cucumber and mint ($14.90).
Ruby, unusually, passed on the breakfast menu - which includes eggs cooked six different ways as well as the yummy sounding french toast with poached pear, mascarpone and maple syrup ($14.50) - and instead went for the creamy rocket and pumpkin penne pasta with grated parmesan ($13.95): 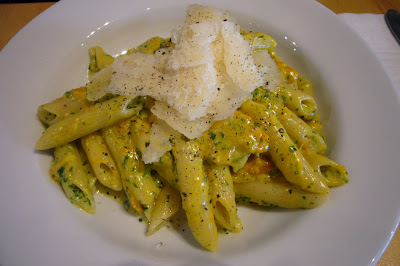 I had a taste and it was creamy and garlicky delicious. And even though I wasn't hungry, I devoured my lemon chicken sandwich with lettuce, tomato and Neufchatel cream cheese ($10.50): 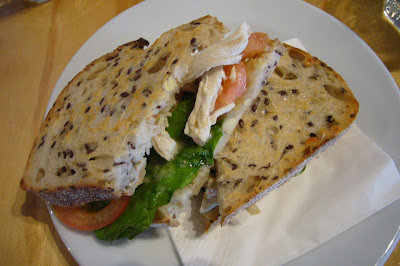 I only had a glass of water as I was in a hurry and had to hop, but Ruby loved her flat white. They also have a range of ''things that are not coffee, but we still like them'', such as smoothies and fresh squeezed juices named after people such as Jay, Peggy and even Barry.
Next time I go, I want to try their Iced Coffee, which is made from a "freshly extracted" double espresso blended with vanilla ice cream, milk and honey ($5.50). Sounds dreamy delicious and another reason to return in addition to checking out that tongue.
*
Third Village
80 Stanley Street
Darlinghurst (East Sydney) NSW 2010
02 9361 5826
Third Village Facebook Page
Third Village Website
Posted by Violet Tingle at 12:00 AM

Thanks for the great review.
http://www.urbanspoon.com/b/link/1573768/biglink.gif