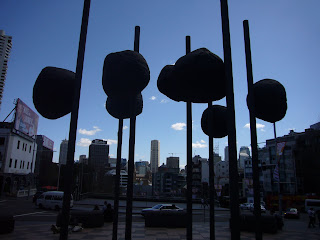 Located on the eastern edge of the Sydney CBD, Darlinghurst - with a population of just over 10,000 - is bordered by Woolloomooloo, Kings Cross, Paddington and Surry Hills.
William Street, known for its street prostitution, borders the neighbourhood on the north, while Oxford Street, famous for its gay bars and night life, runs along Darlinghurst's southern end. To the east are the posh suburbs of Woollahra, Darling Point and Double Bay.
Linking William and Oxford Streets, running north to south, are Darlinghurst's main streets - Victoria Street and Darlinghurst Road, which are home to cafes, pubs and boutiques.
I have names for all the different parts of the neighbourhood, such as The Ridge, The Flats, and The Lowlands but I won't go into that now, suffice to say that I live on "Darlinghurst Hill", the highest point of the suburb on Royston Street.
Darlinghurst is home to writers, musicians and artists, including actor Hugo Weaving, filmmaking couple Baz Luhrmann and Catherine Martin (who live in the suburb's historic mansion, Iona), author Peter Robb and novelist Mandy Sayer, whose husband, playwright Louis Nowra, lives across the border in Kings Cross.
The neighbourhood's prominent sites include St John's Anglican Church (the steeple of which I can always see from the window of a plane): 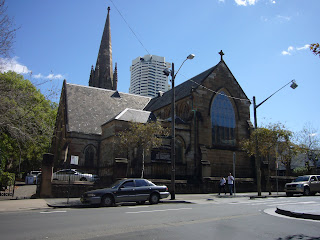 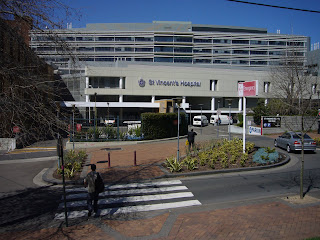 and the Sydney Jewish Museum (which I used to live across the road from).
Another famous landmark is the Harry Seidler-designed, 43-storey Horizon building, which casts a shadow on the neighbourhood and can also be used to pinpoint Darlinghurst by air.
The suburb also hosts a fire station, a Ken Unsworth sculpture (unaffectionately dubbed "Poos on Sticks"; shown in the photograph at the top of the page), as well as the Stables Theatre, Darlinghurst Courthouse and the National Art School.
Darlinghurst does not have a train station (Kings Cross Station is nearby) but is serviced by the rogue 311 Bus (more on that another day).
For a history of Darlinghurst read Larry Writer's fine book, Razor, and for the suburb's Wikipedia entry click here.
Posted by Violet Tingle at 12:02 PM