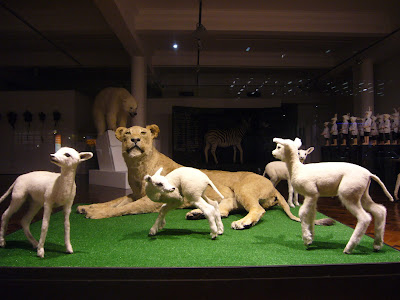 Walk along William Street on any Friday or Saturday night and it's like a zoo with plenty of gorillas, baboons and apes wandering around without their shirts on and leering at the female of their species. The mating call is usually something along the lines of, ''Hello, ladieees,'' which is accompanied by the gorilla, baboon or ape sticking their tongue out and flapping it up and down. It's an unusual ritual, quite disturbing to see really.
But while there are plenty of these hairy primates on William Street, never before have I encountered zebras, lions or polar bears . . .  that was, until Wednesday night when I passed by the large windows of King Street Gallery on William.
The gallery was closed, but peering out its windows at me peering in, were an assortment of wild animals. I was transfixed. This was taxidermy of the likes of which I have never seen.
The dead animals were stuffed and arranged in unlikely settings by New Zealand-born artist Rod McRae, who I believe lives in Darlinghurst. The photograph above shows one such artwork, Mommie Dearest, which has a lioness sitting in maternal pose, caring for a group of little lambs.
Before you have visions of the artist roaming around Africa sourcing his materials with a shotgun, it must be said, all the animals are ''ethically sourced'' and died naturally.
Having said that, it must have taken a bloody long time to gather the rabbit ears used in this artwork: 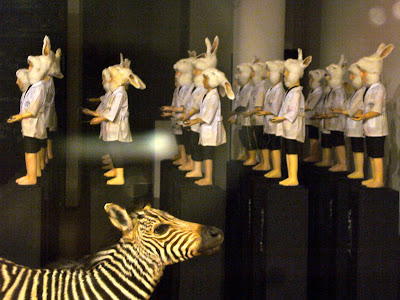 And the zebra foal? According to this Sydney Morning Herald story, the zebra was a stillborn. 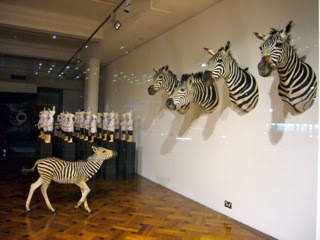 McRae's work, according to his own artistic statement, is to challenge our ideas about the environment and climate change. This idea or goal is most evident in the work below, which shows a polar bear balancing atop a refrigerator: 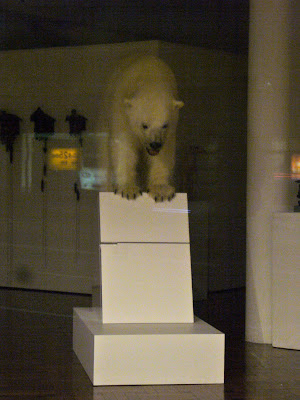 UPDATE: I went to see this amazing and challenging show today and while I would have liked to walk away with Dome of Doom ($1200 and already sold) - a bird's nest holding three eggs, guarded by two small birds, with large, furry spiders climbing a branch towards it - or a print of Operation Foxtrot ($1100, pictured below), or Blessed are the Meek ($1400) - a perfect lamb with a bone in its mouth - I could only afford to take home a copy of a free glossy flier, with an essay about McRae's Heart of the Matter. 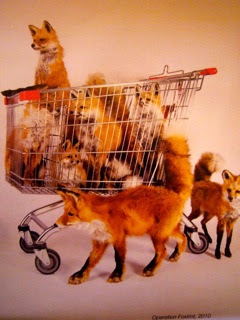 The essay, by artist, writer and University of Sydney lecturer, Court Williams, shed some light on this fascinating show. The most interesting information, for me at least, was that the bunny ears from Rabbit Heart to Heart, were collected from an abattoir, and are basically by-products of the rabbit meat industry. The figures on which the rabbit ears are mounted, are holding pace-makers, which are salvaged from dead bodies because the electronic devices can not be put through the cremation process. It's so fascinating, I now want to see the show again. 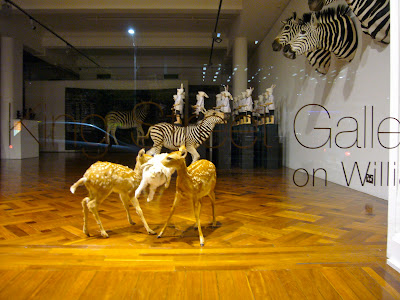 What a great review! I only wish I lived in Sydney and that I could go and see it myself...

It's a great exhibition to take a toddler. Billie at first clung to me in fear that the lion and zebra would eat her up. But after 10 minutes in the gallery without any action from the animals she relaxed, and didn't want to leave. Next stop: the zoo.

I must say that I am now a little haunted by the rabbits with pacemakers after learning where they came from. Best not explain that bit to Billie.