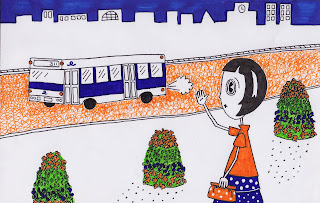 A small part of my week is taken up by scenes such as this: 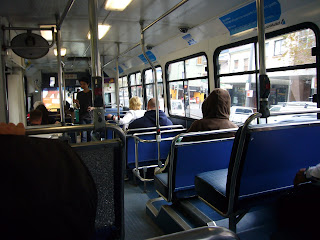 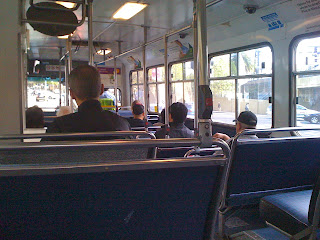 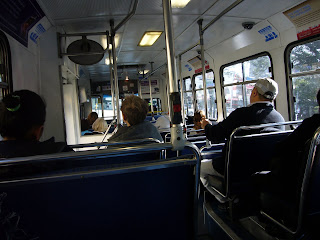 It may not look like the greatest place to be, but while I'm seated there, looking at the backs of people's heads, I couldn't be happier, because I have just managed to catch the 311 Bus. And that's no easy feat.
The 311 Bus - or the 311 Mystery Bus as it is known to dozens of Darlinghurst's residents who spend a great deal of time waiting at the bus stop for the ride that never arrives - is a vehicle that inspires mixed emotions.
When it fails to show up, or arrives early so that I miss it, I curse the damn thing and then fork out $10 for the cab to work.
But when it arrives on time - and the driver actually sees me and pulls over - I just love that bus.
Then there are the other times when I'm in no need of public transport and I see the 311 waiting impatiently at the lights, rearing to go: 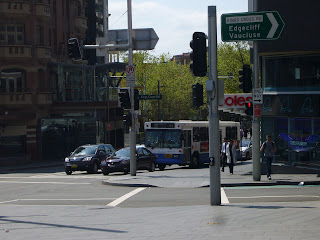 Or just storming past in a blaze of blue paint and petrol fumes: 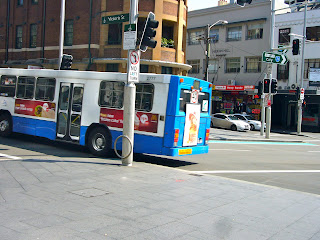 It is during these moments that I feel compelled to turn to the person nearest to me and say, ''Look! There's the 311!''
Such is its phantom-like allure. 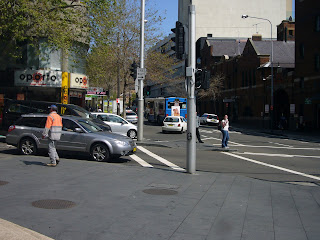 The 311 route could not be more efficient. It begins its journey down at the loop in Elizabeth Bay, chugs up Greenknowe Avenue, cruises along Macleay Street, hoons along Victoria Street and tears down Oxford and Elizabeth streets along the edge of the CBD to Central Station.
From my bus stop on Victoria Street, it takes me only 10 minutes to arrive at work on the 311.
There's also a 311 Doppelganger bus that begins its route at the Elizabeth Bay loop and ends at Circular Quay, near Sydney Harbour, but that doesn't service Darlinghurst residents.
Darlinghurst instead has the 389 Bus from Bondi Junction in Sydney's eastern suburbs, which happens to pass along Burton Street and down through Little Italy (in the Darlinghurst Valley or Flats) on its way to the Quay. It is a bus that isn't purely devoted to the suburb and I only use it when I need to go to David Jones department store, because it stops right outside the door on Elizabeth Street.
There's also an army of buses that plough along Oxford Street on their way to and from other places, but I am not interested in those itinerants.
To catch the 311 it is useful to have one of these: 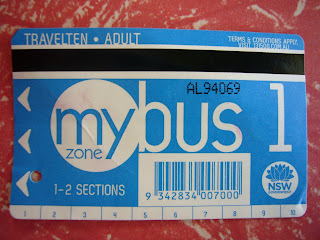 You can buy the TravelTen ticket at most convenience stores in the area and for $16 you can take ten rides on the 311 that would normally cost $20 if you were paying by cash.
The alternative commute to Central Station from Darlinghurst is by train, which departs from nearby Kings Cross, but that costs $3.20 for a one-way trip.
There is also this bus: 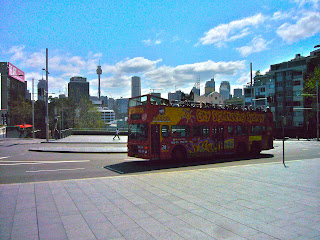 But it costs $30, cruises around the city endlessly and is designed for tourists.

The other thing I love about catching the 311 is the curious people, overheard conversations and occasionally interesting graffiti that can be found inside its hallowed interior.
I have seen some strange commuters, usually nervous-looking middle-aged men, who hop on the bus at Taylor Square and then alight at Whitlam Square, a journey of about 500m that would be more efficiently traversed on foot. These people are not elderly, generally look healthy and I often wonder about their motivation. Perhaps, like me, they just simply love being on the 311.
I also spent one trip listening in to a conversation between two women in which I received a detailed account of one's mental health history and whether or not she was presently going through a manic period. Judging by the tone and volume of her voice, I gave her a positive diagnosis.
Then yesterday, while luxuriating in the sun on the 311, I spotted this collectable sticker on the back of a seat: 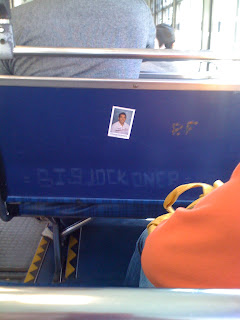 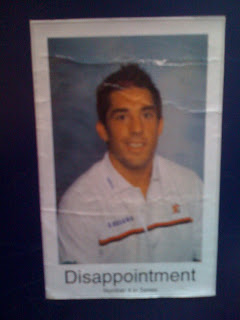 The caption reads: Disappointment, Number 4 in a Series.
I wonder if the man in the photograph is standing at a bus stop somewhere in Darlinghurst, still waiting for the 311.
Posted by Violet Tingle at 11:00 AM

Oh Violet, the man on the "collectable sticker" on the 311, is none other than Braith Anasta, the (disappointed) captain of The Roosters (Eastern Suburbs Rugby League Football Club) who were flogged by St. George in the NRL grand final a few weeks ago.
BTW, I spent a fair bit of time in the "Hopes and Dreams" on Darlingithurts Rd. back in the mid 70's, as my best (artschool) buddy Tony Wieruszewski lived there in a single room on the courtyard.
x

Oh, Jock. You can not expect me to know about every single sports person. I already know about Mark Webber and Wendell Sailor and that's enough.

Thanks for sharing information.

I vow never to wait for the cursed 311 and then I wait and wait and finally get it....and I vow again to never wait for it