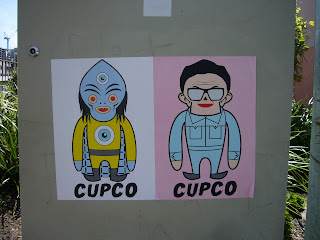 Loitering around the Bourke Street badlands in Woolloomooloo and Darlinghurst today, these colourful characters caught my eye. They look like some bent, Japanese comic book heroes and monsters, and there were posters of them all the way along the street. I like to think of the pair above as Three-Eyed Web Man and Twin-Pocket Geek. 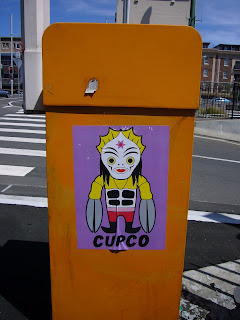 The chap above would have to be The Crab Monster. 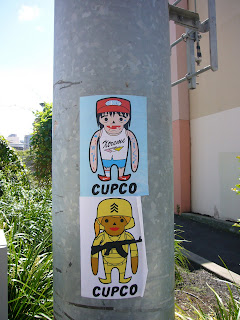 These two look like Redneck One and Redneck Two.
You may have noticed the word CUPCO in large capital letters beneath each character and you may have thought this was just another plastic-cup promotion stunt.
But no, a genuine artist is behind these posters and the only thing he is selling is felt dolls, which look like his mad characters, and have detachable heads. He's a bloody genius. I have a secret fondness for dolls and now I want one of Luke Temby's hand-made friends. He even offers a custom-made doll service where you can have a felt character made in your likeness.
Temby, who is in his late 30s, was inspired to make his wacky dolls during a five-year stint in Japan. He arrived back in Australia, with his own living doll, wife Mayumi, and set about building a doll empire of more than 100 pieces.
Temby has made dolls of Osama Bin Laden, female suicide bombers, Jesus, Satan, Scientology founder L. Ron Hubbard, Joan of Arc, the multi-armed Hindu goddess Kali and former standover man turned author Mark Chopper Read.
He has also held a couple of solo shows at the Damien Minton Gallery in Redfern, in inner-Sydney, where in 2007 the doll of Hubbard - being shot out of a felt volcano - was listed for sale at $850 and dolls of the Pope and the Queen sold for $950 each. Joan of Arc being burned at the stake - while listening to The Smiths on her walkman - sold for $850.
I rather fancy the Suicide Angels, which are limited to an edition of ten, and are relatively inexpensive at $350. 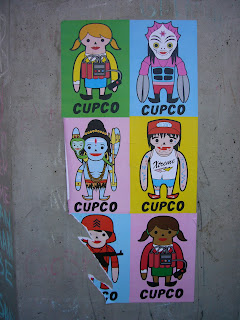 Temby lives in Summer Hill, in Sydney's inner-west, so I'm guessing it was one of his minions - or a fan who requested free stickers through his website - that pasted these colourful posters up around Darlinghurst.
Posted by Unknown at 10:00 PM

my hubby and i own the Hubbard doll. It is awesome.

Oh, thanks, Sam! Now we are all jealous! How have you installed it your home? Is it just mounted to the wall?