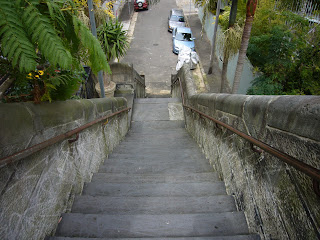 Beare's Stairs
- Register of the National Estate
The Register of the National Estate was established in 1975 and is a list of about 13,000 items across the country that are culturally, aesthetically and historically important. Darlinghurst is home to 24 of those items and one of those is Beare's Stairs, which links Caldwell and Surry streets.
The Register was frozen in 2007 and will be dissolved in 2012, with the listed items then falling under relevant state, territory and local government heritage registers.
Thirteen of the 24 items in Darlinghurst have already been listed under the NSW Heritage Act, while the remainder - and some additional 295 items - are listed with the City of Sydney Council (both lists can be found if you search here).
The listing essentially means that if developers or individuals purchase one of the properties, heritage recommendations are attached to any development application for the site. In some instances that means walls, ceilings, cornices, joinery, fireplaces, doors and windows should not be altered or removed, but conserved or restored to their former glory, to preserve the heritage for future generations.
The City of Sydney Council list of 319 items appears comprehensive and includes dozens of terraces, apartment blocks and commercial buildings, but I was still surprised at the number of places that weren't included, such as my former home, 40 Hardie Street, and my present residence on Royston Street.
Items on the council list include the Ballina flats, at 5 Darley Street, the gorgeous Mont Clair apartment building, at 347 Liverpool Street, and the Rushcutters Bay Stormwater Channel No 84, which runs through Rushcutters Bay Park and is listed as partly being in Darlinghurst.
One day I will hunt down that section of the stormwater channel and the other 318 items on the list, but for my first adventure I decided to seek out the shorter list of 24 buildings and structures on the Register of the National Estate.
I originally began this exercise as one post but after a while I realised I was supposed to be writing a blog post, not Shantaram, or some other epic. So I have divided my ramble through the National Estate Register in Darlinghurst into 24 posts, one for each item, and I will post them over coming days and weeks.
After I have tackled those two dozen posts, random heritage items listed under the NSW Heritage Act and the City of Sydney council will appear.
Because it was close to home, I began my walk at Beare's Stairs, which for some reason has not made it on to either the state or local government registers. In fact I could find little reference to Beare's Stairs anywhere online, but I have to assume they were named after the same Beare of Beare Park (in nearby Elizabeth Bay).
Beare's Stairs fall within the Barcom Avenue Heritage Conservation Area, of which I have devoted an entire post to here, with information taken directly from the valuable NSW Heritage Branch website.
My heritage item posts should not be relied upon as a comprehensive history or for architectural detail; I have merely plucked out the pearls that I found interesting. I found a wealth of information from a range of websites, which I acknowledge here:
Sources: NSW Heritage Branch, Dictionary of Sydney, Australian Dictionary of Biography, National Library of Australia - Archive of Australian Newspapers, State Library of NSW, Wikipedia, Department of Sustainability, Environment, Water, Population and Communities, NSW Public Schools, Government Schools of NSW from 1848,
NSW Department of Health.
Posted by Unknown at 11:30 PM

What is it like to actually live on a Public Stairway like Beare's stairs? How do you get large pieces of furniture in? There are only a few stairs in Sydney that provide access to residences, Agar steps and McElhone steps which provides access to a block of falts are the only other examples I can think of. Does anyone know of any others?

Made from the stonework of Craigend Windmill I read elsewhere. Steeped in history...