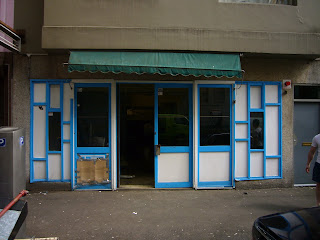 This is such a sad photograph and shows the site of the New York Restaurant in Kings Cross, which last week turned off its gas stoves, put away the fry-pans and switched off the lights after 22 years at 18 Kellett Street and more than 50 years in the area.
I rushed over to Kings Cross when I learnt about its closure, but it was too late. Less than one week after owners John Kakaris and Paul Varvaressos handed back the keys to the landlord, the place was being gutted. Even the hanging, outdoor light-box signage, with its retro script, was gone.
The New York diner, as it was known, was one of those rare places where the menu didn't change in 50 years and the prices barely rose either. Sausages with chips and salad was about $6; a glass of orange cordial just 70c.
I only found out about its closure a few days ago, when my photographer friend, John Webber, showed me a picture he had taken last Saturday night of a couple from Picton, south of Sydney, eating their final New York T-bone steak. They had been travelling to eat at the diner for 30 years.
The diner was also great for lonely, old-age pensioners who could enjoy lamb-cutlets and chips for tea in a social environment, and without having to spend too much of their measly, fortnightly government-cheque.
I once knew a cheery old man called Little Col - not to be confused with Big Col - who lived at the KB Hotel in Surry Hills.
Little Colin was in his 70s but refused to retire from the job he had held since leaving school in the 1940s. The company owed him a motza in superannuation and long-service leave, because I don't think Little Col ever took holidays.
Every day Little Col would work his 9-5 day and after knocking-off, he would catch the train from Central to Kings Cross to have a 6pm dinner at the New York diner. I think he ate there most days without fail, until he died suddenly in 2005.
For a peek inside the New York Restaurant's doors - when they were still open - the deluxe food blog Not Quite Nigella, features a well-written and comprehensive account of the diner's characters and cuisine.
I never ate at the New York diner and I'm sorry about that now, but I was also saddened to learn that the only reason it closed was because the landlords doubled the rent.
The building is owned by Y S Pty Ltd, which is directed by Yvette and Rodney Studniberg of Vaucluse. Ms Studniberg is the daughter of John Steidler and the pair once jointly-owned 62 Darlinghurst Road (home of the Love Machine), but the site is now solely in her and her husband's name. Ms Studniberg used to operate the Lydia Florist from 62 Darlinghurst Road and is presently the director of about half a dozen companies, including the Flower Man florist in Double Bay.
I am really curious as to what is going to happen next to the Kellett Street building, because despite tradesmen gutting the place today, I could find no development application for the site lodged with the City of Sydney Council. There is also now a For Lease sign in the window. 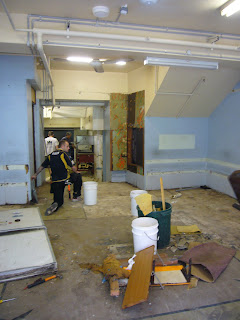 I watched as the tradies tore out the kitchen and threw the rubbish on to the footpath and the reusable stuff in to the tray of this ute: 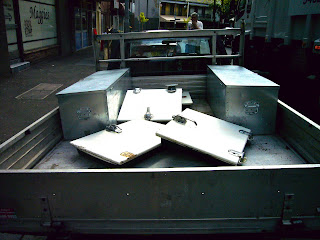 Oh, what stories those kitchen doors could tell.
Posted by Unknown at 9:05 PM

I ate there a few times after the Astoria closed. It was popular with the regulars, but I never really felt comfortable there. The regulars were very jealous of where they sat and let you know it.
The manager? was a young guy with a good dry sense of humour, saying things like how the "New York" was soon to be listed in the Michelin Guide.
The cutlery didn't match nor did the furniture. The food was basic but cheap. And yes I'm sad it's gone.

me too arnold, for me their food was fine. what big deal on me is also their manager. I guess he should know and learn now why this things happen.sell my restaurant