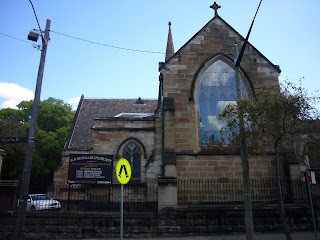 From Beare's Stairs I skipped to the grounds of St John's Anglican Church, whose front doors open at 120 Darlinghurst Road, and whose pulpit backs on to Victoria Street, with a driveway running alongside, creating one of my favourite short-cuts in the neighbourhood.
In the warmer months the church gardens are filled with flowering, fragrant plants, such as Yesterday, Today and Tomorrow, a purple and white flower with a heady scent that fills the air in and around the church. Every Sunday, the sounds of the church bells ring out across the neighbourhood.
St John's was commissioned by the wealthy and god-fearing citizens of 19th Century Darlinghurst on one of the highest points in the neighbourhood. The foundation stone for the Gothic-style building was laid in 1856, and the church opened for services two years later. But the Goold and Hilling-designed church wasn't good enough for one wealthy benefactor who declared it ''unsightly from the road and a discredit to the parish''.
In 1871 architect Edmund Blacket was recruited to fix things up and in doing so, made the church his own. Blacket added the distinctive Gothic Revival spire and tower, finally giving the building some character, and which today still dominate the church and the surrounding neighbourhood.
About four or five years ago there was a campaign to Save St John's by members of the Darlinghurst Residents Action Group (DRAG), when a development application was lodged to build a high-rise apartment block on the neighbouring low-rise Star Car Wash site. The development would have cast a shadow over the architecturally-significant St John's and encroached upon its breathing space in the landscape. But the people's passion won over the developer's dosh, and Star Car Wash, which offers another handy shortcut between streets, is still there today.
Posted by Unknown at 12:00 AM

Violet,
I was looking at a 1844 map highlighting the Riley Estates and it shows the site of St Johns as "Church of Alexandria". I can't find anything of the history of such a church. Alexandria is often associated with Greek churches but aside of a few who sere transported in 1829 and a few in 1835, there doesn't appear to be enough to establish a presence of much significance. Any idea about this church or maybe it was in the planning at the time.