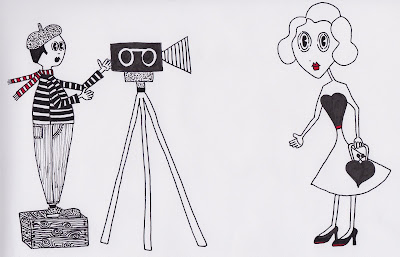 Television's a bit of a bore and I can rarely sit still in the cinema, but I'm quite happy to rent films on DVD, so that I can stop, pause and play at leisure.
My local, the Darlo DVD shop, at 110 Darlinghurst Road*, has been around since the olden days when there were big boxy things such as Beta and VHS. It used to take up two shopfronts in the same building but when the smaller-format DVD arrived on the market, the store shrunk too.
Darlo DVD stocks a fairly vast collection of foreign and independent films, with new-release titles costing $7 to rent overnight.
Here is a photograph I took of Darlo DVD today: 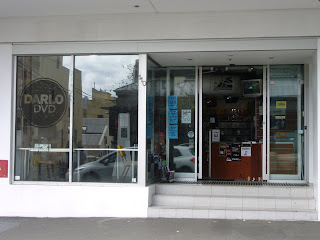 There is often chatter about the impending death of the local DVD/video shop due to the growing popularity of online downloads, but about a year ago a new threat to the locally-staffed stores emerged: 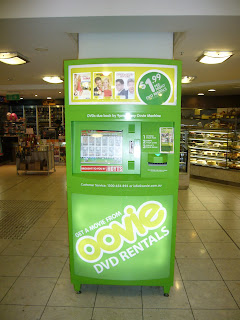 I first spotted this bright green Oovie vending-machine (one of a pair) in the Kingsgate Shopping Centre, beneath the Coca-Cola sign in Kings Cross. And I felt outraged. It was the same way I felt when I realised Coles and Woolworths supermarkets had introduced self-checkout systems where customers scan their own grocery's barcodes, bag their own goods, experience a brief moment as a check-out chick and then go blissfully on their way, not realising their aptitude with a cash-register just meant the supermarkets' no longer needed to advertise for extra staff this Christmas.
I have nothing against technology, it just annoys me that large supermarket-chains can so easily convince their customers into believing they are making their lives faster and easier by allowing them to do the check-out chick's job. When really, the real aim behind Coles' and Woolworths' new systems, is that they can now employ fewer staff to work a handful of check-outs and if anyone complains about the long queues, they can simply be waved on to the self-checkouts. See, we are thinking about our customers' needs.
I once read somewhere that humans' require at least three conversations or interactions with other humans each day to avoid slumping into depression. And it's true. I have experienced entire weekends when I haven't spoken to a single friend, but my descent into Prozac-muncher has been saved by brief chats with the man at the bottle shop, the woman behind the counter at the newsagent and the cashier at Coles. So I not only worry that the self-checkout system is going to result in fewer jobs, I am concerned the nation's mental health will take a dive if there is no one behind the counter to talk to.
My outrage about the Oovie machine followed the same reasoning but I also wondered what would happen to Darlo DVD now that these flashy new vending machines had set up shop nearby? Surely they would be forced to close and their young staff would have to look for new jobs. And Coles doesn't need any extra staff.
But I was sure the Oovies wouldn't last anyway. Not in socially-minded Darlinghurst. People here care about jobs for the workers, medically-supervised injection centres and mental health. But then I spotted this Red Room DVD-factory in the Oxford Square shopping centre, on the corner of Oxford and Riley streets: 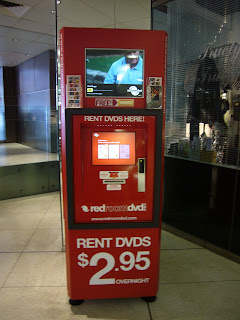 Red Room even promotes the mantra, "DVD Killed the Video Store", on its website and describes itself as a ''Revolution of the Video Rental Store''.
So the video-vending-machine industry was growing and I was wrong. In fact, people actually queued up to use the Oovies and I couldn't understand why until one cold, February day when I was hungry, lonely and poor, with no money to afford a $7 over-nighter and I saw, blazoned across the Oovie machine: $1.99 New Release.
Well, I thought, I'll just have a look and see how this thing works and not long after I was curled up at home watching The September Issue and it didn't cost me a cent because your first Oovie rental is free. What a bargain. I was so clever. And then to further validate my good move, Oovie emailed me a code, which allowed me to rent two movies for the price of one on the following day.
So the next morning I lashed out $2.99 and watched the gorgeous Samson and Delilah and the literally forgettable, The Lodger, which I have no recollection of, except for an Oovie receipt that says I rented it.
Over the next few months I returned to the Oovies twice (Capitalism - A Love Story; Julie and Julia), but after failing to visit the vending machines in the past two months - just because I had no desire to watch anything - they sent me an email enquiring about my mental health: 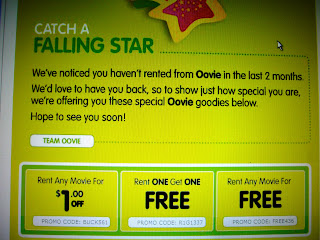 ''Catch a Falling Star: We've noticed you haven't rented from Oovie in the last 2 months.
We'd love to have you back, so to show just how special you are, we're offering you these special Oovie goodies below. Hope to see you soon!''

I may like my bottle shop man to be friendly and my newsagent to be chatty, but faux chumminess in an email from the anonymous Team Oovie - and the description of me as a ''fallen star'' - made me a bit uncomfortable. They also used the word ''special'' twice in the same sentence. Who writes these things? Darlo DVD would never do that.
So I have decided to stay away from the Oovies for the moment, because apart from the email, I always worried that I'd be using the vending-machine one cold, miserable day when a staff member from Darlo DVD would walk by and spot me in the act of betrayal.
*
Darlo DVD
4/110 Darlinghurst Road
Darlinghurst NSW 2010
02 9331 5675

*UPDATE: Darlo DVD has moved and has been reborn as:

They're also free every Wednesdays - they email you the code the day before. Hard to hold out against that if you're impecunious.
PS if you're really worried about lack of human contact maybe you need some more (and better) friends... ;-)

I also receive the free Wednesday codes but usually by the time I reach Oovie, the only movie left is Tinkerbell and the Great Fairy Rescue.
It's usually self-imposed solitude, Mr Barber, but yes, you can never have too many friends.

Thanks for the nice post is My Darling Darlinghurst.

This is nice info. Thanks for sharing info.