My friend Ruby Molteno was out wandering through the back alleys near her home in the Darlinghurst Flatlands, when she came across this wonderful scene.
Usually when you come across painters with their easels in public places, the artwork is often dreadful and of a cheap touristic style, never failing to include a well known Sydney landmark.
But this artist's work, was quite different. It was actually very good, Ruby said.
Not an Opera House sail in sight, just a romantic depiction of a random Darlinghurst back alley, called Barnett Lane, better known as Ten Buck Alley - after the corner cafe on Bourke Street and the prostitutes who frequent the area.
There's a picture of the alley on the My Darling Darlinghurst Facebook page here. 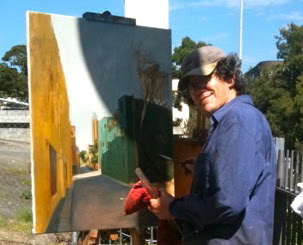 The artist's name was Michael Kelly and he told Ruby that he likes to paint old Darlinghurst buildings and streets, but he is worried that these kind of scenes are disappearing.
Kelly was born in Orange in 1956 and graduated from Darlinghurst's National Art School in 1985. He has since held 11 solo shows and been in countless group exhibitions, and is now represented by Woollahra-based art dealer Eva Breuer.
Kelly mainly paints en plein air and there is a gallery of his work, ranging in price from $880 to $7700 at the link below.

*
www.evabreuerartdealer.com.au
Posted by Unknown at 12:00 AM

I believe the cafe on the corner of Bourke St and Barnett Lane was named after the nickname given to the alley in the '70s. I'm only guessing that was the era because I'm sure prices have gone up since then, although I wouldn't know!!!
I'd be interested, actually, to learn more about how it got its nickname and why this particular area of Darlo became home to this particular type of work. BTW, Ten Buck Alley Cafe does a mean coffee. Great blog, Violet.