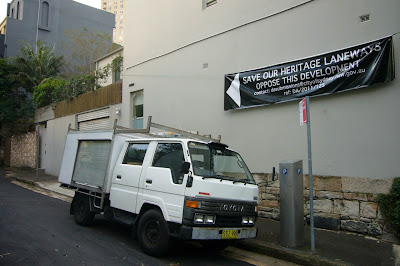 You may recall how I wrote last month about the proposed dunny lane development in Caldwell Street, whereby a Federal Court Judge has submitted an application to the City of Sydney council to build a house on a tiny 48sqm Darlinghurst block.
If not, you can read the blog post here.
The development application angered residents of Caldwell Street and nearby Surrey Street, especially the owners of three houses whose properties back on to the proposed four-storey house site.
Their opposition to the development - and the judge's canny purchase of the land for a token $1 - attracted much attention in the mainstream press, with articles in The Australian newspaper and The Sydney Morning Herald. 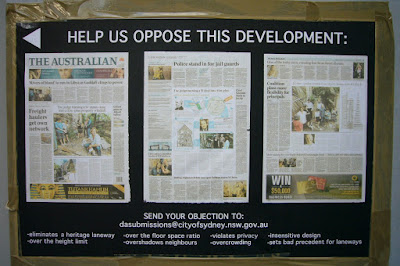 The exhibition period for the development was initially to end on March 3, but the council extended the deadline to March 25. The council received 60 submissions during that period and of those 59 were opposed to the development. There was just one single submission in support.
According to the council, submissions included residents' concerns about loss of access to properties via the rear laneway and impacts on surrounding residential amenity, including reduced privacy, overshadowing and water run-off.
Submitters also raised concerns about impacts on the heritage value of the dunny laneway and Beare's Stairs (below) as well as inconvenience during the proposed construction period. 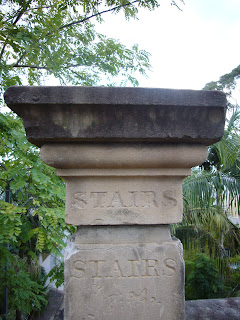 City planners will now review all the submissions and present them to the Planning and Development Committee for consideration, which is expected to happen next month.
It will be interesting to see what the committee decides.
Posted by Unknown at 12:00 AM