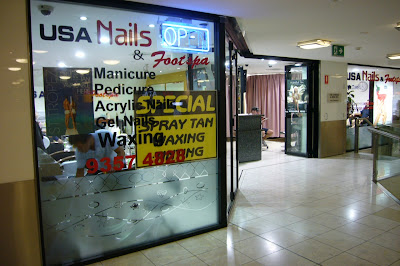 Five years ago if you wanted a manicure, you made an appointment at a small nail salon, which usually employed about one or two ''nail technicians'' and then you'd pay about $45 to have your fingernails done French style, that is, with the little white crescent tips.
These days however, there is a nail salon or three within every 1km radius. Mostly they are run by Vietnamese people and each has up to a dozen male and female technicians who file, buff and polish fingernails and toenails within one hour for just $40.
The turnover is enormous; it's like a nail farm, herding women in and out at $40 an hour.
Suddenly fingernails have become big business. And I think it's rather curious. 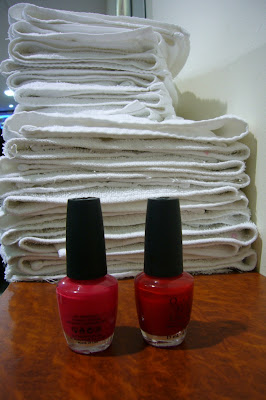 I thought this post might demystify the strange world of the nail farm for male readers who may not have had the unique experience of a professional manicure - even though there are often plenty of men in the salon I frequent.
I also thought it would be good to have a pictorial record of this interesting early 21st century cultural fad.
I have probably been to about 12 different nail farms from as far south as Wollongong and north-west to Pennant Hills, because they are a practical way to kill an hour when stranded in far off suburbs.
But in Darlinghurst, I always go to the USA Nails salon in the Kings Cross Centre, beneath the Coca-Cola sign. The only reason is because they have a loyalty card, meaning I receive every sixth manicure for free. 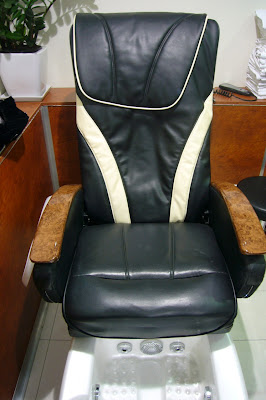 USA Nails has about eight of these manicure chairs with foot-spas attached. It is not as comfortable as it looks because beneath that black vinyl on the back of the seat are dozens of massage knobs, which are supposed to vibrate and make you feel all relaxed, but they are never turned on, so all they do is dig into your back.
Before grabbing a chair, you select your nail polish colour from a stand of Opi brand bottles at the front of the store. Then the manicurists set to work with their little basket of tricks: 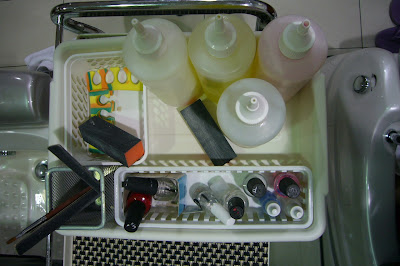 The whole manicure and pedicure process - with a foot spa - goes on for up to an hour and is quite boring. USA Nails has a range of Grazia and other women's gossipy fashion magazines, but despite my best efforts to pass the time by reading them, my hands are - not surprisingly - commandeered by the nail technician, which makes turning the pages quite difficult and means I am frustratingly stuck with the same short article for 15 minutes at a time. You could chat with the manicurist but usually they are deep in conversation with each other and speaking Vietnamese, so you can't really join in. 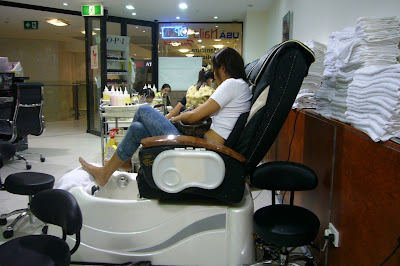 All you can do, while being held prisoner in the chair, is to observe the other manicures going on around you, or stare at the wall-mounted television, which broadcasts music videos of scantily clad American singers dancing around. 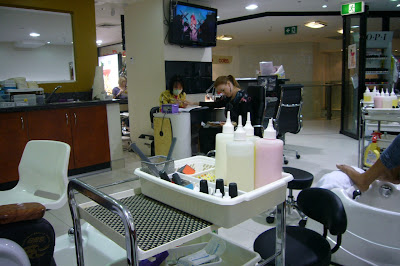 Once the nail polish is on, the most boring process of all begins: the drying time. I really hate this bit and have completely ruined fresh pedicures because I have been impatient and put my shoes on before the polish was dry. The last time I was there, the nail technician actually snapped at me for trying to leave early. I just snapped back and said I hadn't ruined a thing, while trying to hide the dent in the red polish on my big toe. She then insisted on putting on my flip flops for me, which was rather awkward.
But you don't just sit on a chair and wait for the polish to dry - you sit at this obscure drying machine (hands on top, feet in the bottom): 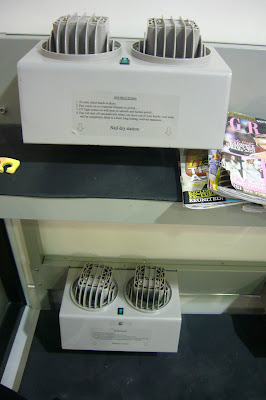 The nail drying station is the weirdest invention and I am never quite sure if it is even working. 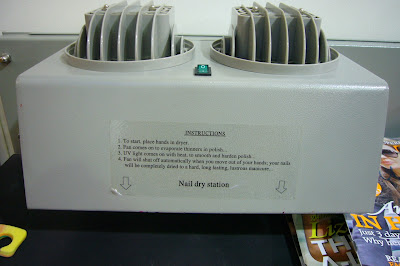 There are instructions taped to the front of the machine which say:
1. To start place hands in dryer.
2. Fans come on to evaporate thinners in polish . . .
3. UV light comes on with heat, to smooth and harden polish . . .
4. Fan will shut off automatically when you move out your hands; your nails will be dried to a completely hard, long lasting, lustrous manicure.
Which seems straightforward enough. Except no matter how long I sit there, I have never made it to the UV light part of the process. Does it even exist? Or does it only come on after another hour? I will never know because I don't have the patience to wait and find out.
*
USA Nails
Shop 8, Kings Cross Centre
Corner of Darlinghurst and Bayswater roads
Kings Cross NSW 2010
02 9387 6112
Posted by Unknown at 12:00 AM

You should try California Nails in Oxford Square, near NAB on Oxford St. Not only is the quality of the manicure infinitely better, the place is immaculately clean, the staff are friendly, there are a load more colour choices and the biggest pile of magazines to read during or after your manicure.

They won't snap at you if you want to leave early and they will fix up a damaged nail for free if they see it's damaged. Believe me, this is worth more than one free manicure in six. And that's probably why they know each of their customers so well, they all become regulars, including me.

I've been here before I saw this post and I must admit, I LOVE it here. Although there isn't much to do whilst they are taking care of me, I actually enjoy the atmosphere, listening to the music and speaking with the staff :) It's professional and the quality is fantastic.

Thanks for the tip - I will try this one as I've been to USA nails twice & twice my nails have chipped within a few days- plus the senior manager is not friendly- they just see you as a cash cow & have loud conversations with one another in Vietnamese-don't like like it!

The staff are usually smart young ladies -the manager seems to be rather curt. However, the quality is not professional as my nails have chipped three times the day after- they don't put the base coat on after the colour polish- only first- I had to buy my own base coat to go over the top- not worth $40!

These guys are great. Excellent price, excellent service, always fresh autoclaved instruments, loyalty card for those who like that.

The worst service I've ever experienced. Everything is an inconvenience. My simple bikini wax not only burned me but created a total mess that they still insisted I pay for without even an apology. I left in shock!

Best waxing ever,painless,so fast. My waxer and her little offsider were so friendly. ..highly recommend. .as a male it is hard to find a good place..customer for lfe