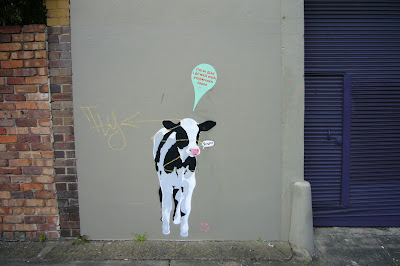 Three Surry Hills laneways. Three very different graffiti pieces. The cute cow (above) was on Richards Lane, just behind the Shannon Reserve, and appears to be by the person responsible for the dalmatians that have appeared with great frequency across the 2010 postcode in the past six months.
The artist obviously likes black and white animals. I hope they move on to monkeys soon. I would love to see some monkeys on the streets. Monkeys crack me up. The cow is saying, ''I'm so glad I go well with peppercorn sauce.''
The monkey, if there ever is one, could say, ''I'm so glad I never evolved.'' 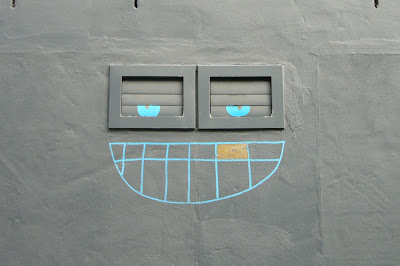 This smiley face (above) didn't require the same amount of technical skill or time, but I still like it. It was in Withers Lane, a little dunny-style lane connecting Riley and Crown streets. 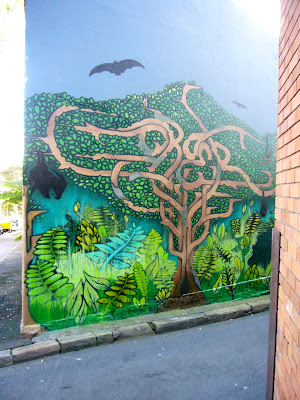 I actually have no idea what this laneway is called. It is so obscure and is located somewhere near Little Riley Street in a weird maze of alleys near Foveaux and Waterloo streets. It's a very old school mural, quite complicated with all those Celtic-style tree branches, and would have taken many studious hours to create.
Posted by Unknown at 12:00 AM

The cow also appears in the laneway next to Bar Reggio. Love that cow.

Love that cow too, but let's see some monkeys!

Where are the Dalmatians on crown?
And do we yet know who made them?