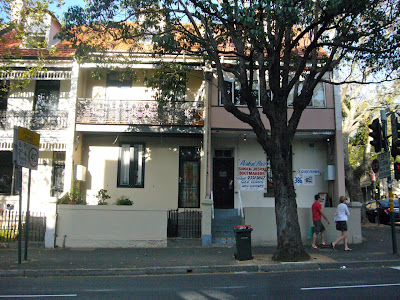 For decades this terrace house (on the right) at 386 Crown Street has been home to a small family business, A&M Perkal Bros, makers of surgical and bespoke footwear. I have never had the need for any such footwear thankfully, but I always notice the building when I walk by because it is covered in old-fashioned hand-painted advertising signs.
The wall of the building on the Albion Street side also had one which seemed to be positioned without much thought or strategy, just simply wherever the sign-painter chose to pull out his brush one day many, many years ago. It read simply: Perkal Bros, Surgical and Bespoke Bootmakers. It always made me laugh thinking about surgical footwear and what exactly that might entail. Then a few weeks ago, maybe a month or more, a street artist hit the wall with a bright purple, pink, yellow and green stencil piece featuring a city skyline. It was genuinely impressive, but oh, so badly placed: right over the old Perkal Bros sign. Bad move, I thought as I walked by shaking my head in dismay.
Well someone else obviously felt the same way and took action. They covered the piece in white paint, as you can see in the photograph above.
You can even see the fury they were driven by, as the white paint begins in large brush strokes and ends with the contents of the paint bucket being splashed at the wall. Take that.
So thank the archive gods for google maps street view, for here is an online record of the original Perkal Bros sign: 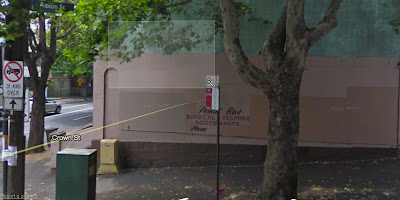 What was even more sad was that the said "street art" over the Perkal brothers sign was actually an advertisement. It didn't last long, but I walked past while it was being done and have a memory of it being for a radio station. Nice blog, btw. I wouldn't live anywhere else.
:)

Oh, which radio station was it?

yes I watched this so called artwork take place as it told the guy about 3 days and wasnt surprised when it was whitened out, considering it said "Slide" and it was an ad for a tv show on fox 8
as I recall they also did a street poster campaign as well

love the Perkal bros both of them are in their 90's but you wouldn't think so,