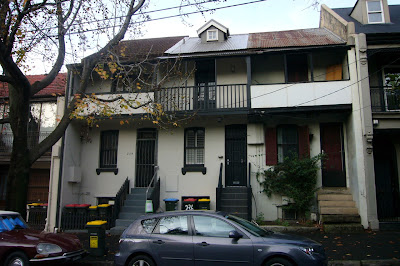 A group calling itself the Bourke Street Collective has been letter-boxing houses and apartments on that street with a flier detailing their opposition to a proposed sex worker drop-in centre.
The development application for the drop-in centre was submitted to the City of Sydney council on May 16 by the Woolloomooloo-based Hope Street organisation.
Hope Street, which is run by the Baptist church, wants to turn a terrace house at 234 Bourke Street into a support and counselling centre for street-based sex workers from 8am to 4pm.
The house last traded in 1977 for $23,000 and is privately owned by the Reverend Noreen Towers. It is zoned residential, but is just around the corner from the Liverpool Street sex-workers's beat, which according to the collective, police are actively targeting. 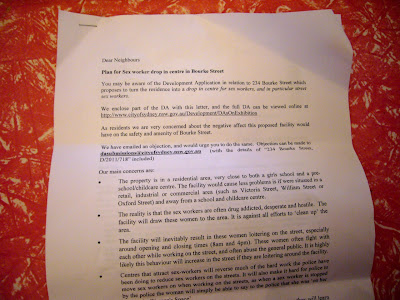 In the flier, the Bourke Street Collective said they are ''very concerned about the negative affect this proposed facility would have on the safety and amenity'' of the street, which is in a residential area and close to SCEGGS junior school and across the road from a child care centre. They believe such a drop-in centre would be more appropriately located on William, Victoria or Oxford streets.
''The reality is that the sex workers are often drug addicted, desperate and hostile,'' the Bourke Street Collective writes.
''The facility will invariably result in these women loitering on the street . . . these women often fight with each other while working on the street, and often abuse the general public.
''Centres that attract sex-workers will reverse much of the hard work the police have been doing to reduce sex workers on the streets.
''It will also make it hard for police to move sex-workers on when working on the streets, as when a sex-worker is stopped by police the woman will simply be able to say to the police that she was 'on her way to the Women's Space'.
''The facility will tend to attract the men seeking out the sex-workers, as they will learn that sex-workers are coming and going from the centre from early in the morning.'' The collective ends by saying that they are not opposed to the ''concept'' of the drop-in centre as they ''are conscious of the need to help these marginalised women''. They just don't want it in their backyard.
The development application is on exhibition until June 10 and can be viewed at the council's site here.
Posted by Unknown at 12:00 AM

Yep... it's our back yard, and front yard, and there nothing wrong with not wanting cruising cars full of yobbos, screaming drunks, discarded syringes, condoms, tampons, tissues and toilet paper on our streets... sure sympathy for the girls but try and get them off the drugs and having to peddle sex to get them...