Across the Border: Newtown: Art and Culture: Will Coles Exhibition 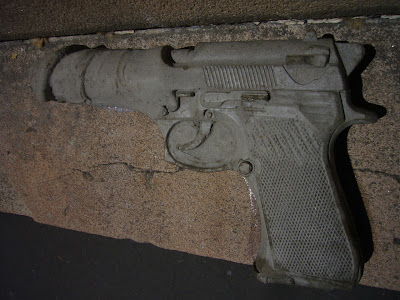 I have never written about the neighbourhood of Newtown before, because I have tried to confine this blog to Darlinghurst and its four or so neighbouring suburbs. Newtown is about three suburbs southwest of Darlinghurst as the crow flies, and six train stops (and two trains) away from Kings Cross.
But there have been many times I have longed to write about Newtown and its fantastic clothing shops, endless cafes and excellent street art. And like Darlinghurst, Newtown also has a rich history.
One of the most interesting historical stories is that of resident Eliza Donnithorne, who lived in Newtown from the 1840s and who was said to be the inspiration for Miss Havisham, the bride left at the altar in Charles Dickens's 1860 novel Great Expectations.
I should also mention that Newtown has quite a few good pubs.
Anyway, I finally hit upon a My Darling Darlinghurst-Newtown connection, which is why I am writing this post.
One of the most popular stories on this blog is a street art post from October 26 titled, Concrete Penis Gun. It featured the concrete sculpture pictured above, by artist Will Coles, which I found stuck to the wall of the old Darlinghurst Gaol.
I like to think it made the top three posts of ''all time'' because Coles's work is witty and finely executed, but I really suspect it's to do with the word penis in the blog title. Ah, penis. People must google that word all the time.
So I thought, considering it was such a well-visited post that My Darling Darlinghurst readers would like to know that Coles's work will be featuring in a new exhibition that opens this Saturday at the Wilson Street Gallery in . . . Newtown.
Coles's show, Tom of Blokeland, will run alongside an exhibition of works by Melbourne artist Melanie Fizmaurice, The Explorer.
The gallery's website features this excellent portrait of Coles: 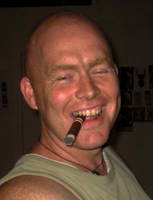 And this excellent picture of one of his works: 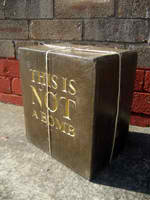 And the website also includes a press release about the joint exhibition, which opens with a word from the gallery's director Janet Clayton:

''In 2011 we place our confidence in the future, launching two artists whose attitude and intellect reflect the frustration and hopes of those who must live over the next few decades with the consequences of yesterday's and today's mistakes.''

Later, Ms Clayton describes ''the pretension of art (as) just some of the fodder for (Coles's) keen jibes.''
Rather ironic, don't you think?
Sometimes - not all the time - I think it's best to just look at art, rather than write about it, or have someone explain it to you. Ignore the gallery directors and listen to the artists, I say. Wisely, Coles makes no comment in the press release. Make sure you visit this show soon, as it only runs for a short time.
UPDATE: Coles's work will also be included in two group shows - that incidentally have the same title - at galleries closer to Darlinghurst, opening this week:

*
While I am on the topic of Newtown, I should also mention a brilliant website devoted to the suburb, developed by the talented archivists at the City of Sydney Archives.
The Newtown Project features maps, history, biographies and loads of other fascinating bits of information about the suburb.
There is a great feature called A Short History of the Streets of Newtown, which alphabetically lists all the streets in the suburb with a brief explanation of how they came to be named.
O'Connell Street, for example, was named after Lieutenant-General Maurice O'Connell, the son-in law of Governor William Bligh, who was captain of the ship during the famous mutiny of HMAS Bounty.
There is also a brilliantly researched biography by Matt Murphy about Eliza Donnithorne aka Miss Havisham.
The Newtown Project is a must read for the neighbourhood's residents who are also asked to contribute their own stories to the site. It is also interesting reading for anyone curious about Sydney history, its inner suburbs or its people.
I was also excited to learn that archivist Naomi Crago included a link to My Darling Darlinghurst on the site, even though my blog has nothing to do with Newtown. Well, until this post, that is.

*
www.sydneyarchives.info
Posted by Unknown at 12:00 AM

Email ThisBlogThis!Share to TwitterShare to FacebookShare to Pinterest
Labels: Across the Border, Art and Culture, Art Galleries, City of Sydney Archives, Newtown, Street Art, Will Coles