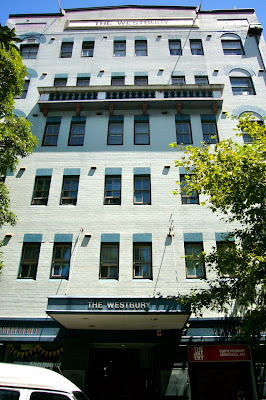 The Westbury apartment building, at 221-223 Darlinghurst Road was once a private hotel, known as The Imperial, with a colourful bunch of permanent residents, among them, many sailors who worked out of Woolloomooloo.
The six-storey building was built in the early 20th century and in the 1980s mid-1990s was converted in to an apartment building with 65 units.
Whenever I have been apartment-hunting in Darlinghurst, I have often noticed rentals available in the Westbury but I was warned off even doing an inspection as I was told the studios were tiny.
But now, after checking out the building last weekend, I am wondering if perhaps I could have handled living in a smaller space if only to have access to the Westbury's excellent rooftop swimming pool. 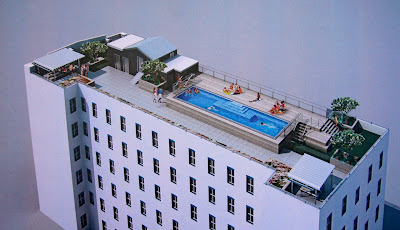 The not-for-profit Australia's Open Garden Scheme organisation last week launched its 2011 program by inviting people to have a sticky beak at the relatively new $638,000 rooftop garden at The Westbury.
Entry cost $6 with the funds raised going to charity.
I couldn't resist, so set off with my horticulturalist friend, Ruby Molteno, to have a snoop around The Westbury. 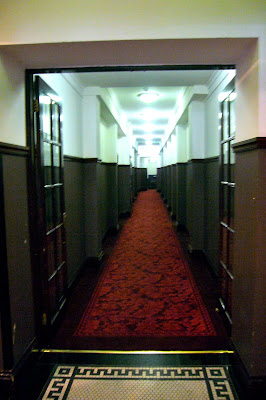 The corridors of endless doors are just like those in an old-fashioned hotel with gaudy red carpet and eggplant- and peppermint-coloured two-tone walls. 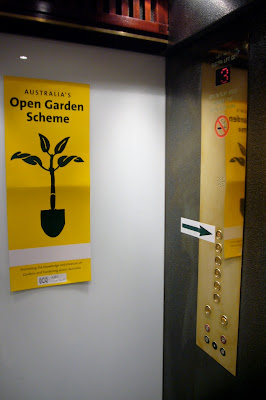 A lift took us up to level six where we then skipped up a flight of stairs to the rooftop. 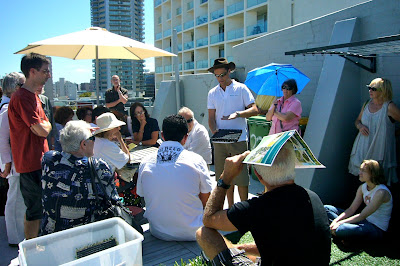 Australia's Open Garden Scheme's primary sponsor is the ABC, which promotes the scheme's various events through their radio stations and website. So the small crowd of 25 or so people looked just like your stereotypical ABC listener: slightly left leaning, opinionated baby-boomers.
The crowd was there to check out the garden and to also listen to a talk by the roof's landscape architect, Mark Harper (the chap standing in the middle with the brown hat), from Atlantis Design. As usual, with such talks, people like to ask questions, which is fine by me. But one man in the crowd appeared to be fed up with people asking questions during the talk and kept on huffing, ''Can't they wait until the end to ask questions''.
I could barely hear what Mr Harper was saying anyway, so Ruby and I decided to ditch the talk to go and explore the garden. 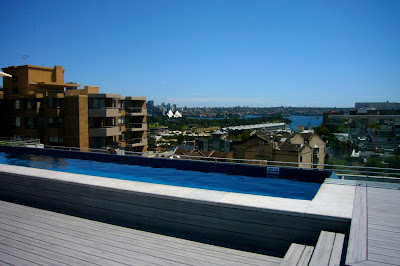 The stand-out part of the garden is this swimming pool, which has an infinity edge that looks across to Sydney Harbour with the Opera House and Harbour Bridge clearly visible. To give you an idea on how the design has improved, here is a picture of the old swimming pool: 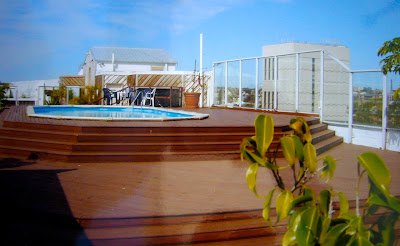 Looks pretty dinky, and apparently the pool was leaking, causing all sorts of bother. 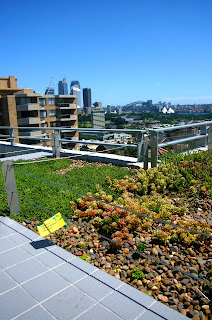 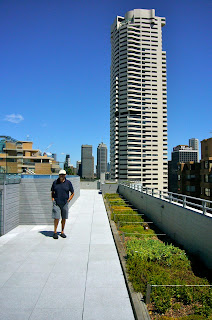 The rest of the garden design is in the Clover Moore functionalist-style, with lots of flat, grey granite surfaces, neat, squared-off corners and six varieties of the ground-dwelling plant, Sedum. 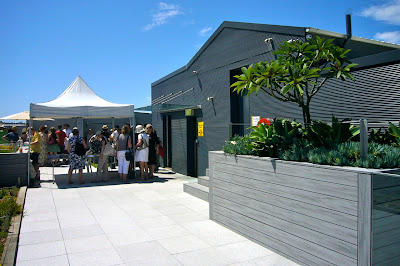 There are also three Red Frangipani (Plumeria acutifolia) trees, surrounded by water-tolerant Agave (Foxtail) and Senecio (Chalky Sticks) plants. In order to stop the frangipani trees from blowing over in the wind, they had to have chains tied to their trunks, which have then been screwed in to the bases of the planter boxes. Wind is the biggest problem on roof gardens, which is why most of the plants are so low down on the ground. Even so, Ruby and I thought there was way too much use of Sedum, especially when small shrubs could have probably been used in areas sheltered by the wall (below left): 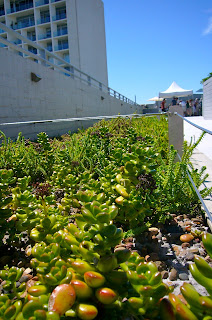 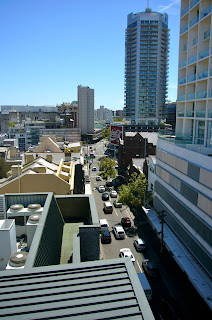 Ruby and I both prefer wilder and more natural looking gardens, one of which we happened to spy on the roof of a nearby building: 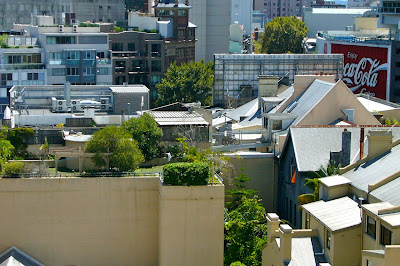 But another important factor behind Mr Harper's design was to create something that was low-maintenance. Most residents were apparently not interested in watering and weeding the garden, even though I would have put my hand up in a flash. I love the smell of a watered garden at the end of a hot day.
The  sleek new Westbury roof garden and swimming pool does puts its southern neighbour to shame: 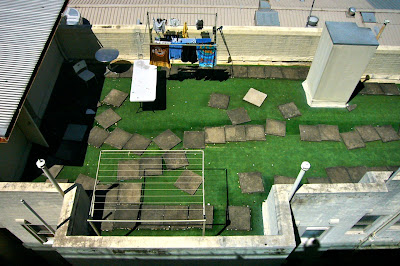 The northern neighbour's roof was even worse, with a curious collection of handbags: 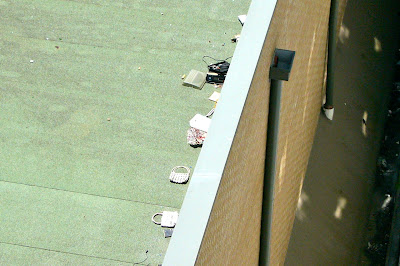 One of the greatest things about The Westbury roof was the views. Oh my goodness it was good to see Darlinghurst from above. The Top of the Town looked like a box for collecting insect specimens: 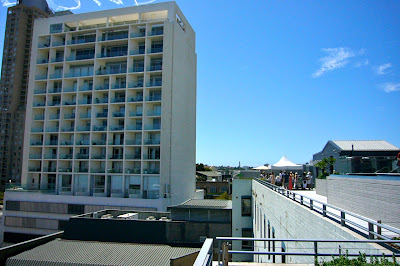 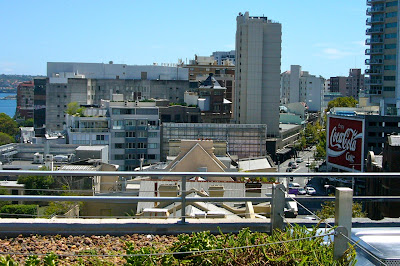 But best of all were the good spying opportunities down to Star Car Wash, Victoria Street and St John's Church: 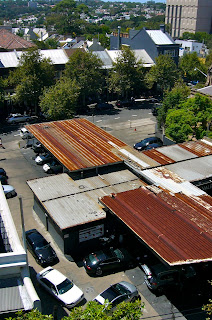 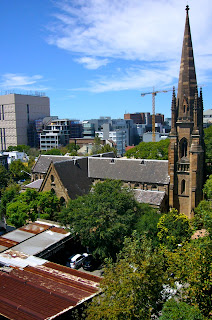 And there's this especially sneaky view of Iona: 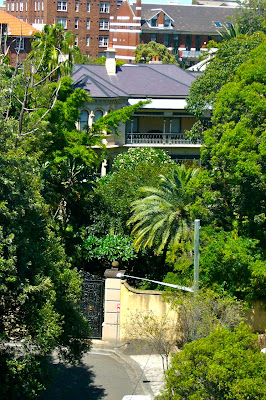 If you ever get an invite to The Westbury's NYE party, take it. I did a few years back, and the view of the fireworks was perfect. Unfortunately, I didn't bring my togs so I didn't get to try out that awesome pool!

What a great blog! I am a Melbournite who has recently set up in Newtown, but as I get to know more about your part of town, the more I fall in love with it.

The Westbury was still a hotel in the early 90's as I worked there as room service and cocktail bar person then.

I need a studio, is there any avaliable for rent?