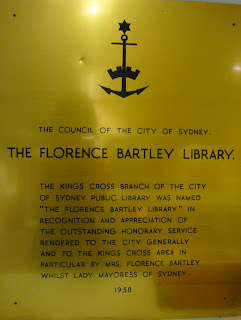 While snooping around the City of Sydney Archives recently I discovered the answer to one of Kings Cross life's greatest mysteries: Who is Florence Bartley? I had posed this question in my post on the Kings Cross Library, back in November. But no one responded with the answer, so the question continued to haunt me.
The Kings Cross Library was once known as the Florence Bartley Library, and was located in a building right next to Fitzroy Gardens. Built in 1958, the building was designed by the City of Sydney council's own architects, yet despite winning the prestigious Sir John Sulman Medal for architecture, the library was demolished in 1997.
So who is - or was - Ms Bartley and why did she have a library named after her?
While doing some photocopying at the City of Sydney Archives I was excited to find - propped up on a cabinet, against a wall - the old plaque from the library (picture above), which has this inscription:
''The Kings Cross branch of the City of Sydney public library was named the Florence Bartley Library in recognition and appreciation of the outstanding honorary service rendered to the city generally and to the Kings Cross area in particular by Mrs Florence Bartley, whilst Lady Mayoress of Sydney. 1958.''


So Ms Bartley was the wife of Reginald James Bartley, a businessman and company director, who was Mayor of Sydney in 1943-44 and 1946-48. You can see a photograph of Reg wearing his mayoral robes here.
Mr Bartley was behind the successful push for the demolition of the 1840s mansion, Maramanah, which I wrote about in my Fitzroy Gardens post:
''After the war, in 1946, Maramanah made the headlines when returned servicemen illegally moved in to the property, saying they had nowhere else to live. Supporters rallied outside and made public appeals for furniture and cooking utensils for the squatters. The squatters were accused of being Communist agitators, as the political party hosted a number of meetings at Maramanah during this time.''
Maramanah was demolished in the 1950s. Previously I couldn't find a decent photograph of Maramanah, but the City of Sydney Archives digital photograph bank has proved to be an online mine of photographic treasures and you can see a picture of the house here, just before it was demolished.
Mr Bartley also tried to push for the demolition of the Hyde Park Barracks and the Sydney Mint on Macquarie Street, in the Sydney CBD, to ''make way for modern structures''. The Sydney Mint is the oldest public building in our city, so I'm glad Bartley the Bulldozer didn't win that fight.
Mr Bartley died in January 1982.
I still haven't discovered a photograph of Mrs Bartley and have yet to learn what exactly her ''outstanding honorary service'' entailed and whether or not she is alive or dead. 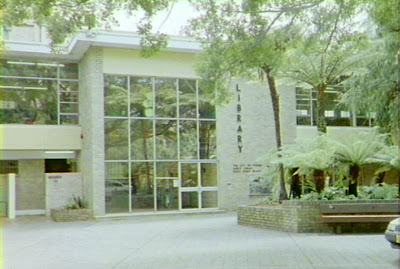 But the City of Sydney Archives digital photographic bank has a groovy picture of the Florence Bartley Library, which you can see here I have now posted above because the link didn't work. 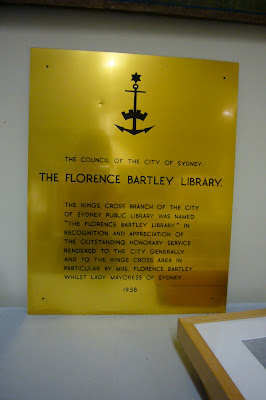 Want to see a great photo of Maranmanah? Try this: http://whystoptime.wordpress.com/page/2/

There are also several pictures of Maramanah in Robin Dalton's memoir, 'Aunts Up The Cross'.