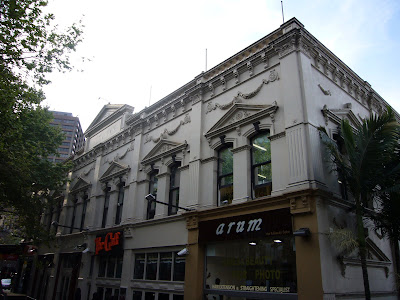 10-20 Oxford Square
- Register of the National Estate, City of Sydney Council Heritage List
I mainly know this square as being the former home of Rogues nightclub, which was this dork, but very popular, dance-music venue that ran from sometime in the 1980s, until morphing in to the equally dork The Gaff nite-spot a few years ago.
I never knew this area - which fronts on to Oxford Street - was called Oxford Square until I discovered the Register of the National Estate list, and after digging around on the Heritage Branch website, I have learned a little more about this historic place.
The area was once part of Burton Street, but in 1887 it acquired the name Oxford Square.
The Victorian Free Classical-style building at 10-20 Oxford Square was owned by the Burdekin family - who were a major landholder in the area - and has the date, 1886, carved in to its parapet. Because this was the year prior to the establishment of Oxford Square, historians have concluded that the Burdekins were responsible for pushing for the area's name change - but they admit there is no documentary evidence to prove this.
I don't really mind so much who changed the name.
The property is also known as the SILF Company buildings - SILF being an acronym for the Sydney Investment Land and Finance company - although those same historians can't find any evidence that SILF ever resided at 10-20 Oxford Square.
Thomas Burdekin left London for Australia in 1828 to set up the local arm of the Burdekin and Hawley ironmongers and merchants. Business must have boomed, for in the ensuing years Mr Burdekin purchased vast tracts of real estate throughout NSW.
When he died in 1844, his fourth son, Sydney Burdekin, inherited the land at Oxford Square. Four years after the building at 10-20 was constructed, Sydney was appointed Lord Mayor of Sydney, a position he held for 16 months until April 1891.
When Sydney died eight years later, the property passed on to his wife, Catherine.
In 1906 the property was purchased by the City of Sydney Council as part of civic improvements and road-widening of Oxford Street.
Over the next 49 years the building remained in council hands until it was sold off in 1958.
Like many historic structures, the two-storey building suffered due to its use as a commercial building, the continual changing of ownership and the dozen or so building applications that naturally follow that change.
The building is presently home to The Gaff, Arum Hair Salon and a doctor's surgery.
While the top floor of its facade is mostly intact, the ground-floor shopfronts have been modified haphazardly without any thought of the building as a whole. The Gaff's ghastly orange signage is a fine example of this ruin - I'm surprised business owners don't give more consideration to their signage and how it sits on a heritage building.
I have firm ideas about signage and believe the reason the beautiful 1913 Kings Cross Hotel, at 248 William Street, recently closed (less than two years after it was given a multi-million dollar refurbishment) was because of its tacky signage, which was at odds with its stunning heritage exterior.
As an aside, a company called Repeller Nominees purchased the Kings Cross Hotel in 2002 for $8.5 million and after spending a fortune on its re-fit, sold it in October last year for $12.55 million . . .  but more on that in another post.
Posted by Unknown at 11:30 PM