Darlinghurst: Books: The Mind and Times of Reg Mombassa, by Murray Waldren 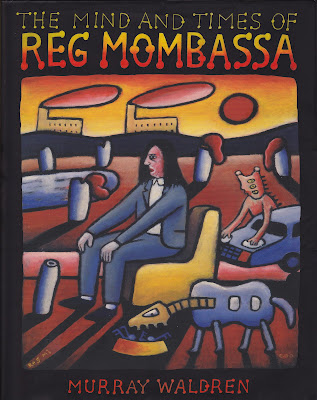 Every once in a while a book is published that not only smells, feels and looks good but the story inside surpasses my usual publishing expectations. And so it was with this fine biography about Australian contemporary artist and musician, Reg Mombassa (real name: Chris O'Doherty), by writer and painter Murray Waldren, which was published one year ago.
I'm not a big reader of biographies of men but I bought this book for three reasons:
1) It was a beautiful, tactile object with lots of pictures: 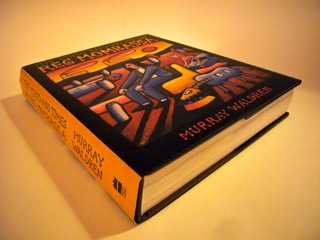 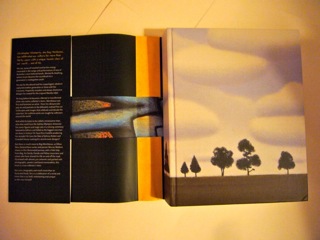 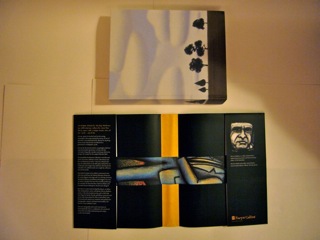 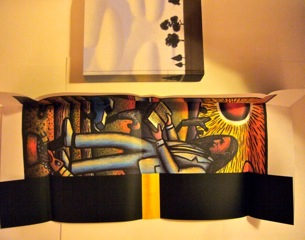 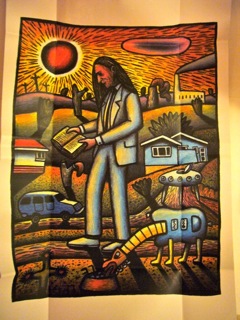 . . . An Art Poster!
2) It was about Reg Mombassa, legendary illustrator and member of excellent band, Mental as Anything, who provided the soundtrack for my youth and who featured numerous time on the cover of Countdown magazine, which I subscribed to as a child:

Countdown magazine, February 1986, (from page 204 of the book).
3) It was $75, signed by Mombassa, written by a friend, and I thought, what the hell, if I don't like it, its heft and size could still be useful as a shield against the Mechangaroo. 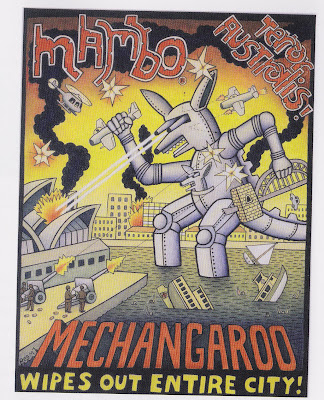 Mechangaroo, by Reg Mombassa, 2001, (page 227).
So I bought the bio last November and that evening sat down at the dining table to have a look at the pictures in the book and unexpectedly stayed up reading until 3am, compelled by Mombassa's eccentric, rich and creative life. I then slept for about eight hours, woke up and continued reading, right until the very last page. I was so engrossed I even read all the acknowledgments, bibliography, discography, exhibition lists, credits, end-notes and index that are stored at the back of the book and which I would normally skip over.
By that stage I was endlessly singing the Mentals's song Too Many Times, too many times, wishing I could play an instrument and dreaming of setting up a new Sydney art collective. The only thing I was unhappy about was that within 24 hours of buying the book I had already read every word and there was nothing left of it to read. 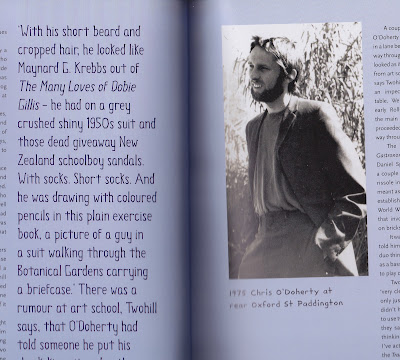 Chris O'Doherty at the rear of his Oxford Street terrace, Paddington, in 1975, (pages 98-99).
Apart from the fascinating story of Mombassa's crazy character and life, the book - set in New Zealand and Sydney - also features a number of pubs, apartments and houses in Darlinghurst and the surrounding suburbs and includes references to various events in the neighbourhood.
Mombassa studied at the National Art School, housed in the Darlinghurst Gaol, and it was there he met many of the Mentals band members.
Mombassa initially lived with his parents - who immigrated to Australia from New Zealand in the late 1960s - at their home in Avalon, on Sydney's northern beaches.
But commuting to the National Art School ''on a double-decker bus'' for two-hours was tiresome, so in the early 70s Mombassa moved in with a friend to a house in Bondi Junction, in Sydney's eastern suburbs. The other flatmates were junkies and crims and one day the house was raided by police.
Soon after, Mombassa packed up and moved to a house in Paddington Street, Paddington, neighbouring Darlinghurst.
During this time Mombassa played bass and lead guitar in a band called, Bulldog, doing garage-band covers for weddings and parties. His circle of friends and acquaintances grew, and included Maria Hisshion, who lived in a house in Liverpool Street, Surry Hills, neighbouring Darlinghurst. Hisshion was a drug mule for the infamous Mr Asia heroin importer and she was murdered on Christmas Eve, 1975 - her body was found 12 days later in Sydney Harbour, tied to a 7kg anchor.
There are also tales of squats and squatters, wild parties and drugs during this period in Sydney's inner suburbs, with locations including the Excelsior Hotel in Surry Hills, the Cell Block Theatre at Darlinghurst Gaol, and The Settlement community centre in inner-city Chippendale.
Mombassa's future wife, Martina Woodburne, was also involved in the protest/squatter movement on Victoria Street, Potts Point, in the mid-1970s, when developers wanted to demolish historic terraces and a green-ban was imposed by the Builders Labourers Federation. Department store heiress and street-publisher Juanita Nielsen, who was noisily opposed to the development also disappeared, presumed murdered, during this time.
In early 1972 Mombassa moved in to an ''unpleasant dark and dusty house'' in Boundary Street, Darlinghurst, for a brief spell, before relocating to a flat on Glenmore Road, Paddington.
By the age of 24 Mombassa had held his first art show at Watters Gallery in Darlinghurst's Little Italy district. Around that time he started gigging with his brother Peter O'Doherty, Martin Murphy (who lived in Caldwell Street, Darlinghurst), David Twohill and Andrew ''Greedy'' Smith, with the group soon to become known as Mental as Anything. 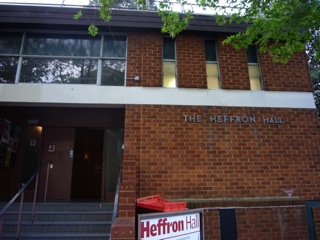 The band played regular gigs at Heffron Hall (pictured above), on Burton Street in Darlinghurst, Balmain Town Hall in Sydney's inner-west, and at the Tin Sheds Collective studio on City Road, near inner-city Broadway.
The book paints a picture of a lively, energetic and creative Sydney, and while memory tends to romanticise things, it appears Mombassa really has dedicated his life to art and music in a rather determined, flamboyant and enviable way. 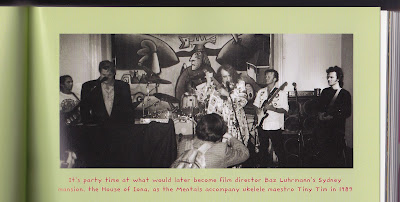 The Mentals also played a gig with Tiny Tim at Iona, the 19th century Darlinghurst villa, in 1989, (page 255).
But this engrossing book is not just about Sydney-centric incidents and escapades. Mombassa went on to become the signature artist for Mambo clothing - thousands of people around the world wore his fashionable prints - and he later designed massive blow-up figures based on his Mambo characters for the 2000 Sydney Olympics closing ceremony. The Mentals were also one of the best-selling Australian bands of the 80s and continue to gig today.
Yet despite these commercial and popular enterprises Mombassa remained a subversive and eccentric individual and after reading this book I now believe he is one of Australia's greatest artists.
Mombassa still plays with the Mentals but a few years ago I saw Dog Trumpet - the band he has with his brother, Peter - at the Illawarra Folk Festival, south of Sydney, and they rocked like happy-folk-hill-billys. Mombassa, using his real name, Chris O'Doherty, also continues to exhibit at the Watters Gallery. With Mombassa's seemingly endless creative output, Waldren will no doubt have to write additional chapters for the book in about 20 years. 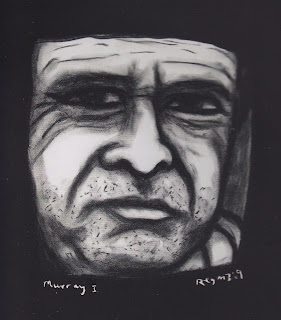 Author Murray Waldren, by Reg Mombassa, 2009, (from the dust jacket).
*
In a nice bit of serendipity blog-post-wise, Harper Collins will this week be releasing a second edition of The Mind and Times of Reg Mombassa, which comes in a classy slip-case and includes a 24-month calendar featuring Mombassa's artwork. The limited edition set, pictured below, costs $50. 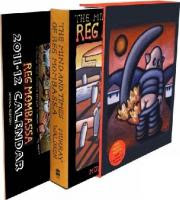 An interesing guy - I like the music, but his art never did it for me, reminded me too much of an acid flashback. Although for a time his art meant Sydney to me.

Me too! I read EVERY word and was disappointed when the end came. But it was only today after reading this blog that I realised I had my own poster in the jacket. Ha Ha. Fantastic. And thank you.