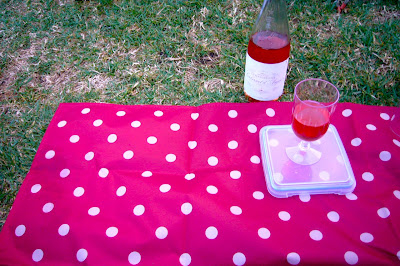 There's nothing like a picnic to while away the summer days, and the Sydney-style version - at this time of year at least - involves crowds of thousands of people. 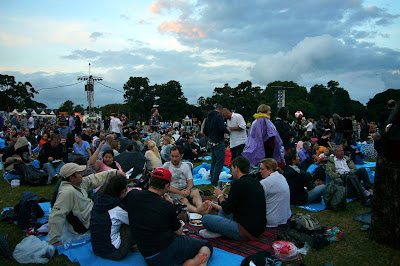 My dear friend Ruby Molteno and I packed a picnic on Saturday evening with the aim of nestling down on the grass for Summer Sounds in the Domain, part of the Sydney Festival 2012 program, which last week featured former Faith No More front-man Mike Patton, doing 1950s and 60s Italian pop songs under the moniker, Mondo Cane.
But rain had been threatening all day and when I at last made it down to Ruby's joint in the Darlinghurst Flatlands the clouds had broken and with the rain pattering on the pavements, we instead picnicked at her place before walking up to the Domain with just a bottle of wine and a picnic blanket to carry. 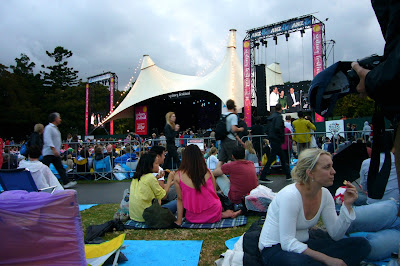 We arrived just after 7pm and managed to score ourselves a square of lawn fairly close to the stage. The rain had stopped by then, so we assumed this fairly valuable, grassy real estate had been abandoned not long before by a group who had no faith in the weather. 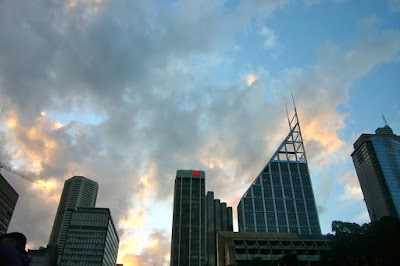 But we are optimists, Ruby and I, and we were certain that a small patch of blue sky was going to spread and the rain clouds would disappear. So we sat through some inaudible speeches by a range of people, including Lord Mayor Clover Moore, and then at 8pm a band called Brous (pronounced Bruce), arrived on stage and played some worldy type of music, which only seemed to encourage the sky to darken. 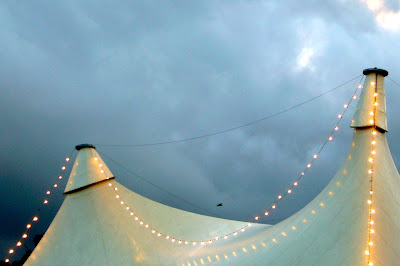 By now there was a sense of anticipation building: would the rain clouds hold out, should I make a run for the bathroom now, when was Mike Patton going to appear? 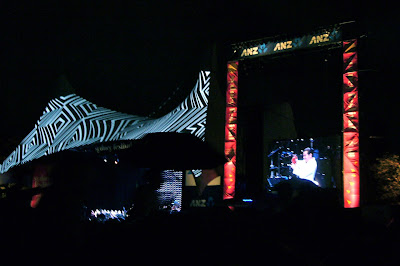 And then he arrived on stage, decked out in a white flashy suit, accompanied by a 25-piece orchestra. It was hard to connect him to the same metal rocker of Mr Bungle and Faith No More fame, who could conjure the voice of death with a megaphone and mic, and whose Epic video clip in 1990 caused a stir with animal rights activists because of a goldfish flapping out of water. Big deal in those days.
But while crooning through the first two old-fashioned love songs, he did his characteristic bug-eyed look and there again was his inimitable voice and yes, this was Patton.
During the second song the rain came down, the umbrellas went up and there was a mass exodus of people who had tired of the wet.
Ruby and I stayed put, until we realised we were sitting in a puddle of water and our clothes were soaked through, but then Patton kicked into gear with the third song and we leapt to out feet and started dancing in the rain.
It was one of the best moments I have had all year. Admittedly, I have done very little in 2012, but you know what I mean. A moment I won't forget, especially because just as he was hitting his stride and his white suit was becoming transparent from the rain, the organisers decided to postpone the gig.
There was $50 million worth of violins, Patton claimed, and if you had a violin you would understand.
Whatever. At least Patton could have stayed on stage and entertained us, but no, they all disappeared for about 15-20 minutes, while we stood in the rain, coming down from the high. 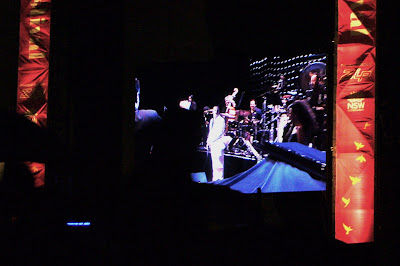 When they finally arrived back, it seemed like an age had passed and the mojo was gone. Patton didn't seem like he was in the mood anymore. We gave him three songs and then beat it - my wet dress was starting to become uncomfortable. 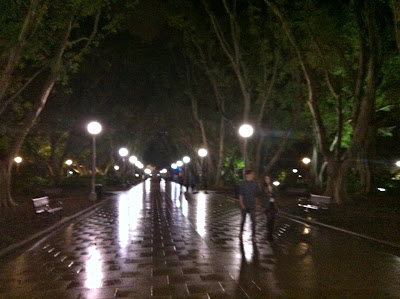 We wandered through Hyde Park, which was glistening with rain and as we turned a corner through some bushes, we came upon a magical clearing and there amongst the trees, was a little wood cabin, like something out of Twin Peaks. 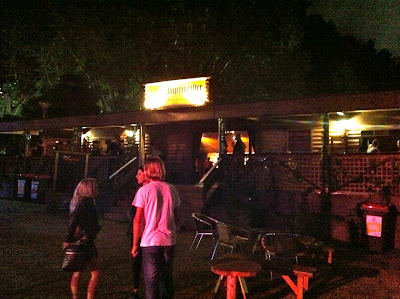 It was a complete Hunting Lodge, with rocking chairs on the veranda, while inside there was a roaring log fire, leather lounges arranged around low coffee tables and antlers mounted on the walls. We had to stop for a bevvy and dry off. Then Ruby noticed that Nick Zinner from United States band the Yeah, Yeah, Yeahs, was about to arrive for a free DJ set, so we hung about amongst the stuffed animals and chandeliers made from liquor bottles and made ourselves cosy on some woody stools and listened to music under the heaving sky.
It was after midnight now and no longer caring about our wet clothes and umbrellas, we slunk into the The Famous Spiegeltent (free after 11.30pm) where there was some kind of 50s-style beehived band of women singing the greatest songs for dancing. And so we dumped our rain-soaked handbags in a booth and shoo-bopped until the early hours. 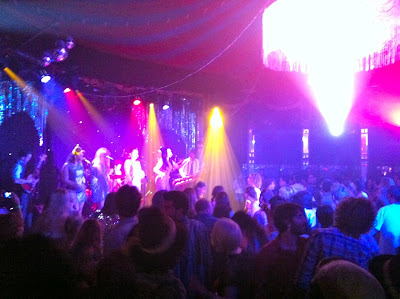 Now, over the coming weeks, Ruby and I have a delicious schedule of Sydney Festival 2012 treats: PJ Harvey tomorrow, 41 Strings by Nick Zinner on Sunday and DJ Koze and Prins Thomas on the following Saturday. In the meantime we'll be claiming woody stools at the Hunting Lodge as often as possible. Are you doing anything for Sydney Fest this year?
Posted by Unknown at 12:00 AM

Email ThisBlogThis!Share to TwitterShare to FacebookShare to Pinterest
Labels: Across the Border, Sydney Festival 2012, The Domain

Patton was still in the mood after the rain and SMASHED IT! You missed out!