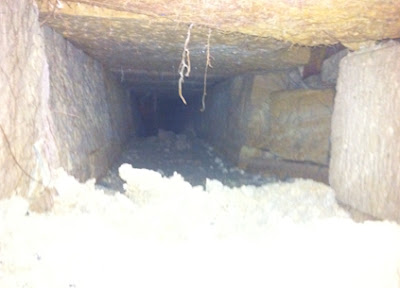 Is this the secret tunnel that we have been searching for?
Perhaps my detective skills failed and I gave up too early on the hunt for the secret tunnels, which a young Stephen Hickmott and other boys from the old Marist Brothers College used to explore in the 1960s.
But that hasn't stopped other history detectives from going on the hunt for the mysterious tunnel that led from Ye Olde Darlinghurst Gaol, beneath Burton and Liverpool streets to the Alexandra Flats on the corner of Darley Street.
Yesterday I received these sensational and intriguing photographs, which show a tunnel beneath the former jail site, now a technical college. 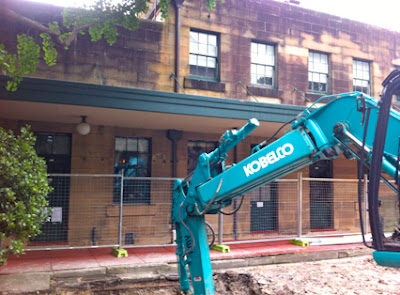 If you are late on the hunt for the tunnels, see the stories here and here and then come back to this post. 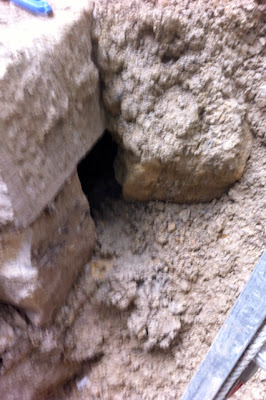 The student who sent me the photographs said there was an excavation contractor working at the technical college this week fixing a sewer main about 5m underground, close to the entrance on Forbes Street . . .

"As they got about 3m down they apparently started to hit the side of some very large lime and sandstone boulders,'' she writes.
"The excavation man said he noticed that they had been carved and wondered why they were so far down.
"It wasn't until later when one of the plumbers was standing in the 5m deep hole that he noticed a gap in the sandstone blocks that were now at his eye level, just big enough to fit your fist threw (above).
"The contractors must have moved one out of place with their digging machine, which then revealed a long tunnel.
"From where I was standing I could see in and I saw exactly what you described about the tunnels: 3 foot-wide limestone walls as far as the torch would shine, going off in to parts which could be those cells you were also talking about." 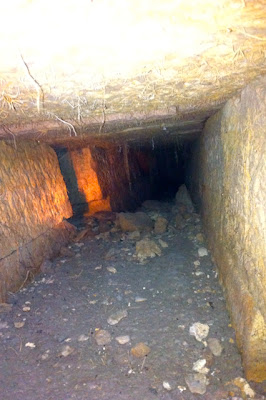 It certainly looks like the tunnel that Stephen Hickmott described. But until someone crawls inside them and follows them all the way, we might never know where they go.
The student has invited me to go and have a sticky beak TODAY from behind the work-fence, but I am stuck in the office and would never be able to get there.
Is there anyone who can go and have a look? Perhaps you could distract the workers somehow and then slip into the tunnel when they are not looking and just crawl for dear life.
But just imagine if they filled in the hole while you were inside and you became trapped in there forever, until you died of thirst and starvation.
I could not in good conscience encourage this kind of dangerous behaviour, but if you can go for a sticky from behind the safety of the work-fence, please do and report back with details.
Posted by Unknown at 12:00 AM

Love it , Good work violet I'm really surprised that other then this there doesn't seem to be any real evedince that they excist other then story's . It's a great blog , Jay

God, love this< what have you discovered???!!! All work should be stopped> I thought the tunnels went from the old jail but caratas is what you've discovered as well??

Caritas is the old psychiatric hospital that used to be across the road from the gaol. It has since been demolished and the site is being developed into apartments.

Oh ok .. It's the workes on that site that put a hole in the sewer main & filled it with concrete for there peers without knowing , which caused the sewer in the old gaol to block up that's why the works been done in the Gail

I think you need to get the Council heritage people down there asap to explore and photograph. This is really exciting as many people know the legend of the tunnels.. always hoped they would be found. We need Council down there before it gets filled up.

Historian Deborah Beck, who lectures at the National Art School on the same grounds, would be the best person to check it out. The workers should ask for her to come down and have a look.

The archaeologist from nsw heritage had a look yesterday and decided it was a 'box drain'and entrance has been filled in today. I will quiz them as not sure if they took any photos or got into the tunnel. Suspect a cover up. Cant understand why no proper survey. Lots of pressure to finish job maybe?
Maybe we can approach ground floor residents of Alexandra? Does anyone know someone with ground radar?
Can Mr Willmott etc do a drawing of location of tunnel entrances in Alexandra , anyone seen the plans?

Deborah Beck also says they are drainage channels. Perhaps Stephen was crawling around in old drainage tunnels and his childhood imagination dreamt up the shackles and cells?

Thanks anonymous for the name correction. Looking back its hard to see myself at14/16 years of age being wrong in imagining small rooms with shackles on the walls coming off the tunnels.The real disapointment is not having them photographed or checked out for you locals from way down inside them.I,ve been their and all you Darlinghurstians are being denied the enjoyment of your history.I suppose i,ll have to find my own way back into them and prove the know alls wrong.Happy Xmas .Steve..

I used to work at Caritas many years ago. As you're aware, it used to be called the 'Lunatic Reception House' back in the 1860's. You'll notice that on the southern facade facing Forbes St, the words 'Caritas Centre' are carved, but the carving is clearly deeper and more recent than the rest of the building. This is because the original name had to be obscured.

Doctors and nurses who worked at Caritas used to say that there were underground tunnels connecting the various buildings in the precinct: the Police station, the psychiatric unit, the courthouse and the gaol, to facilitate transfer of people between the various institutions.

It would in fact be quite likely that tunnels exist as they do at Gladesville Hospital from the waterside up to the main buildings. it was an offence to transport 'lunatics' on the kings highway (ie on a road) so tunnels were needed, and I'm sure convenient for various other reasons as well. When more time is available I'll do some research. I love Violet's blog. The amazing thing is that I frequently walk my dog in Darlo and never yet a confirmed sighting of the phantom Tingle, despite sometimes being there on the very same day... Keep up the good work

I sat in the southern corner of Stonleigh in 1966. Mr Gould was our teacher, a wonderful man who inspired me to grow a passion for History and to spend my life as a teacher of History. Below my desk was an opening leading to a shaft. It was widely held that this was an air raid shelter dating from the Second World War years.