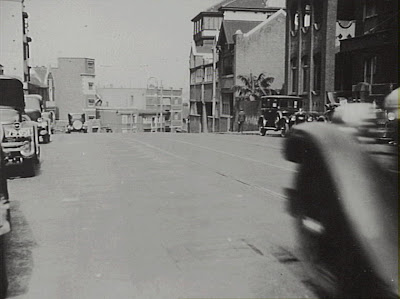 Bayswater Road, Kings Cross, 1929 - From the City of Sydney Archives
My Darling Darlinghurst reader, Sussan, wrote this story in the hope that any readers might help her learn more about the circumstances surrounding her mother's birth and adoption. If you have any clues, please email me: violettingle@gmail.com
''Was the Kings Cross Hotel in William St a boarding house in 1924? Does anyone recognise any of the people in this story?,'' Sussan writes.
"I am really after any leads that may help in trying to find out who my mum’s real father might be."
*
It was the roaring twenties in Darlinghurst: the Kings Cross Hotel, William Street, September, 1924, to be exact. My mum first entered the world in one of the rented rooms there.
She was born to a young, single, 22-year-old, named Elizabeth Florence Hainer, also known as Flory, I’m told.
In the year she gave birth, Elizabeth was living at the hotel with her mother, Alice Maud Hainer and her younger sister, Rose Lily Hainer.
The sisters were born in Forbes, in central west NSW, where their parents, Alice (nee Halliday) and Jacob William Hainer, had married in 1900.
Jacob was 37 at the time and his new bride just 17. The couple also had two sons: George Frederick (born 1907) and Thomas Joseph (born 1909). 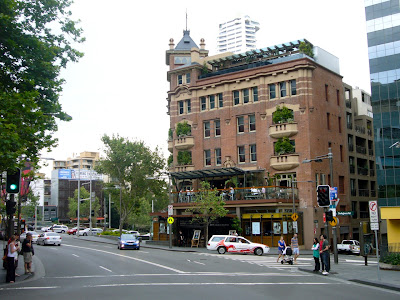 It appears from family stories that Alice and Jacob separated prior to 1924 (Jacob died in Granville in 1940). This is possibly why the three Hainer females lived by themselves in the Kings Cross Hotel at the time my mum was born. There are no records of George or Thomas being there.
Elizabeth’s new daughter - my mother - was given the name Eunice Joan Hainer and we believe she was adopted out shortly after her birth.
Alice and her two daughters appear to have stayed on at the hotel for some time after mum’s birth.
However in 1926, Elizabeth, then 23, married John Guthrie, a 37-year-old tram conductor who lived at 28 Edgeware Road, Enmore.
They married at the Sacred Heart Church, in Darlinghurst, and Elizabeth’s “usual residence” was listed as the Kings Cross Hotel on their marriage certificate.
In 1930, six years after my mother was born, the electoral roll shows that Alice and Rose still lived at the hotel.
But by 1936, the electoral roll for “East Sydney Darlinghurst” shows that Alice, son George, daughters Rose and Elizabeth and her husband, John, were now living at 191 Brougham Street (below), just a couple of streets away from the hotel.
Alice remained in the Darlinghurst area until her death in 1952.
Rose married in 1941 and moved with her new husband to Annandale. She died in 1971 at Newtown, in Sydney's inner-west. 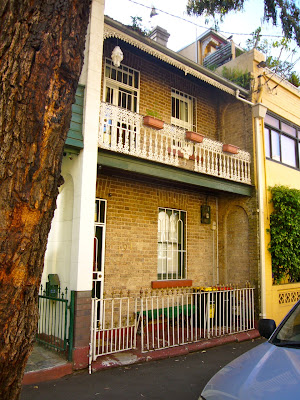 So the years moved by since my mother was adopted out by Elizabeth in 1924, but in 1948 unimaginable tragedy was about to hit her real family.
Based on the electoral rolls it appears that Elizabeth and John Guthrie separated sometime prior to 1943. During this year he was living in Wollongong, south of Sydney, while Elizabeth was in an apartment at 138 Brougham Street (below) with the couple’s three sons (Kevin, Colin and Christopher; my mother, who she adopted out, was her only daughter). 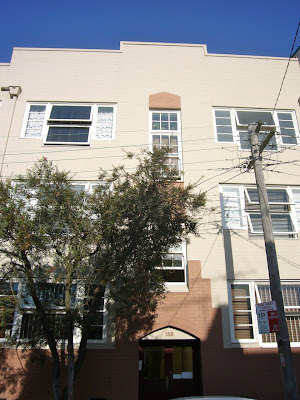 On September 14, 1948, newspapers across the country reported the tragic death of Elizabeth’s husband, John, who was crossing the railways tracks at Wollongong on his 50th birthday when he was hit by a train. 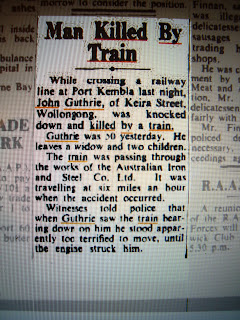 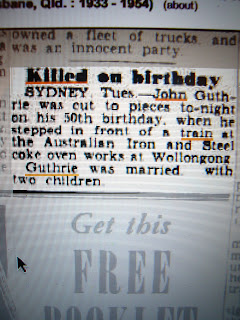 But the year of 1948 became even worse.
A mere three months after John's horrible death another tragedy occurred.
Elizabeth was back living at 191 Brougham St, with her mother Alice, brother Thomas, his wife Edith and her children.
Elizabeth returned home from work one day and heard someone being violently ill in one of the bedrooms. She rushed to the room and found her 19-year-old son Kevin sitting on the bed in a very bad way. On the dressing table was a soup bowl and a tablespoon that contained Weedicide.
“Why did you take this Kevin?” Elizabeth asked.
He replied: “I am sorry mum, I don’t want to live."
Kevin was taken to St Vincent’s Hospital, but died a short time later.
He had been suffering from depression since his father’s death, according to the coroner’s report.
One wonders how Elizabeth went on, but she probably did so for the sake of her remaining two boys. She lived until 1971 and died in Liverpool Hospital age 69. 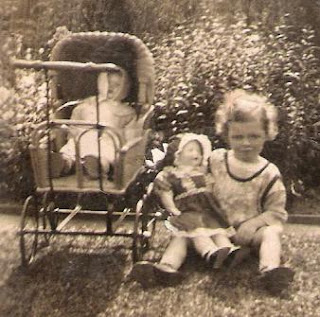 As for my mum, Eunice Joan Hainer (above), she had been adopted by an older couple, Henry William Hines and his second wife Edith (nee Robinson), who had married in 1915.
By the time they adopted my mum they had been married for nine years and Edith was 53 and Henry, 57. Henry had been previously married and four of his eight children had survived to become adults.
They were very old to be adopting a new baby, which is why I sometimes wonder if they were related to the child. My mother was given the new name of Lois Edith Hines.
In 1937, when Lois was just 12, Edith died from a bad heart, and my mother and her adopted father moved into her step-sister’s house at Hurlstone Park, in Sydney's inner-west. 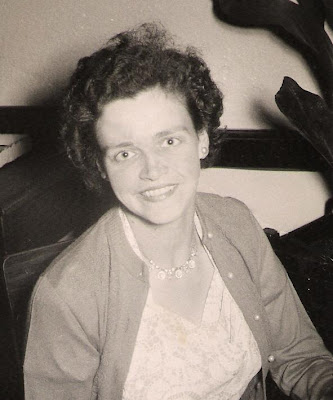 My mum: Eunice Joan Hainer/Lois Edith Hines
In 1941, when mum was 17, her biological mother, Elizabeth, approached her at the knitting mills where she worked.
Elizabeth gave Lois her contact details but my mother became hysterical as she didn’t know she was adopted. She ran home distressed and her family finally told her the truth.
I wonder how Elizabeth found her after 17 years – did she know who her child had been given to?
By that time Lois’s adoptive father, Henry, was suffering from dementia and died on Christmas Day, 1944, in a psychiatric hospital at Rydalmere, in Sydney's northwest.
Mum was only 20 at the time and continued to live at Hurlstone Park with her much older step-sister and her family.
*
At the end of 2006 I started my search for the truth of mum’s real beginnings and uncovered most of what has been told here with my cousin’s help.
Our breakthrough was getting her birth certificate and by chance it confirmed that the child Eunice Joan Hainer had become Lois Edith Hines. No father was listed on her birth certificate.
With these new leads we searched high and low for any remaining family members and through the Ryerson Index  - a database of funeral notices – we found her sole surviving half-brother, Colin. He died in 2006, which was such a shame as mum died in 2007. 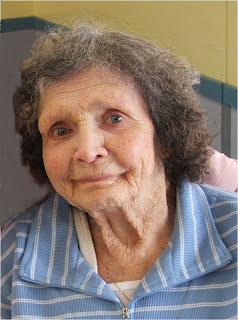 Mum (1924 - 2007)
We also found other distant relatives, through ancestry searches, who helped put some of the missing pieces together for us, however, many of them didn’t even know that my mum existed.
I wrote to the funeral home that had conducted Colin’s funeral and they kindly agreed to pass on my contact details to his last known address. Colin’s daughter’s contacted me just before Christmas, 2010, and to my astonishment, said she knew about mum and that Colin had actually met her.
My cousin and I were in total shock.
Apparently, some time in the 1970’s a policeman friend of Colin’s helped track mum down. They found out where we lived and even drove past our home in Fairfield, in Sydney's west, a few times.
On one of these occasions mum was going out the gate and Colin followed her. He had one of his daughters in the car with him as they followed mum to a shop.
Inside the shop, Colin watched mum purchase a little gold vase and when she wasn’t looking he also grabbed one and bought it as well.
He then got mum into a conversation, small talk I think, and offered her a lift home, just down the street. Things were different in those days so mum accepted - he did have his teenage daughter with him at the time.
However, during this encounter, Colin never revealed to mum that he was her half-brother.
This was apparently because mum had reacted so badly that day in 1941 when Elizabeth had approached her.
She was only 17 then and had either not kept, or had lost, her real mother’s contact details in the confusion of that day.
As the years went by and mum’s real family never heard from her, they presumed she wanted nothing to do with them.
Such a shame as mum was a widow from 1977. She was left with two children to raise, my brother, 13, and me, 10.
For many years we struggled, and to think her one surviving brother was so close and yet they never reunited properly is so tragic.
Colin kept the same little gold vase that he and mum had bought separately on that day in the shop. Apparently it was a prized possession until his death in 2006.
Posted by Unknown at 12:00 AM