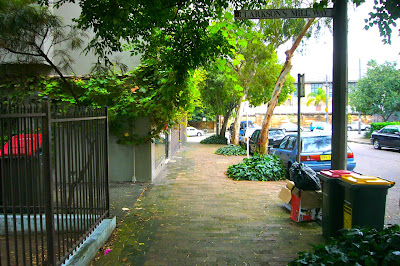 People are remembered in the strangest ways. This week's Street of the Week, which is really a pedestrian laneway, is named after Thomas Clarkson, who built the first windmill on Woolloomooloo Hill, now Darlinghurst. 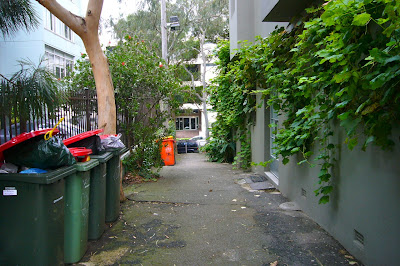 Clarksons Mill Way, as the laneway is named, is possibly not the best way to be remembered, lined as it is with overflowing garbage bins and dotted with the detritus of life: cigarette butts, plastic bags and a man's pair of slippers. 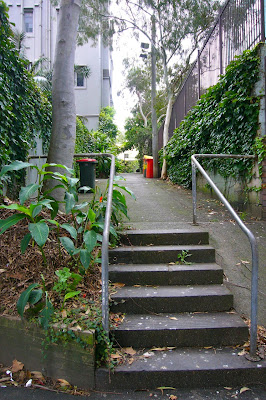 The laneway, between Darley Street and Darlinghurst Road, is in dire need of some beautification.
Nevertheless, I may never have paid Clarksons Mill Way much notice if it wasn't for the research of reader, Michael Armstrong, who was inspired to find out the story behind the lane.
Clarkson, as I learned from Michael's story, was a bit of a shyster, who somehow managed to acquire five large properties and a number of windmils.
Through Michael's research I discovered more than I have ever known about the windmills of Darlinghurst - which arrived on the landscape about two decades before the first villas.
Along the way, Michael also led me to some marvellous historical photographs (make sure you enlarge the one of Craigend).
Here is Michael's account of the roguish life of Clarkson - and his windmills. 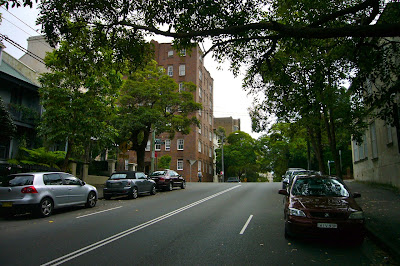 “In about 1819 a merchant, Thomas Clarkson, had erected a windmill near what is now the intersection of Liverpool and Darley streets (above).
"This appears to be the first windmill in Darlinghurst: a stone mill with a mechanical turning head to catch the wind.

"Close by, two post mills were built, their design allowing them to be turned to face the wind.
"A fourth mill was built by Thomas Hyndes on his allotment close to Caldwell Street.
"The windmills were prominent features of the landscape, often depicted in colonial paintings of the town.
"The last of the mills to be demolished, reportedly around 1873 was Hyndes' mill, built close to Thomas Mitchell's Craigend villa.

"Hyndes' mill stood on the highest point of the ridge and was clearly visible from Sydney. Its position is reported to have been at the top of Beare's Stairs in Caldwell Street, east of Victoria Street.
"The mill's building materials were possibly used to construct four terraces in Caldwell Street and maybe the stairs themselves (below)." - Mark Dunn, Dictionary of Sydney. 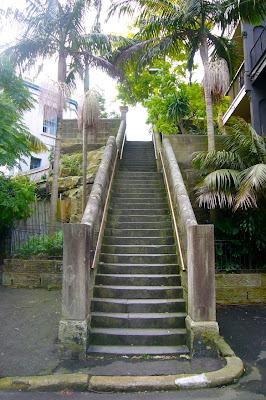 "Thomas Clarkson was born in Kingsbury, Warwickshire, in the UK, in 1763.
"At 31 he married a local girl, Catherine Rayson, some 11 years his junior, and over the next few years they had four children.
"However in March 1805, Clarkson was convicted of passing a counterfeit £1 note, and sentenced to 14 years transportation.
"In January 1806 he was sent as a convict on the Alexander, Catherine and two children also travelling on the ship.
"In August 1806 the four of them arrived in Sydney, Catherine purchasing a house some two months later for £38 on the corner of Hunter and Elizabeth Streets. Here she established a bakery."

"Clarkson was convicted of “embezzling tobacco” on the Alexander and sentenced to two years hard labour.
"On his release from Castle Hill gaol in 1808, he was assigned to Catherine as her convict servant.
"In May 1809 he was fined £2/12/- for selling short weight loaves of bread, however in December the same year the remainder of his sentence was remitted for good conduct.
"In 1810 Clarkson was granted a licence to brew and sell liquor.
"By the following year he already had four properties, and his properties and debts grew steadily.
"The next year he became “bondsman” for rent on the Parramatta to Windsor Turnpike.
"In 1814 he was contracting to build houses, seemingly supplying the upper end of the market.
"He was also supplying fresh meat to government stores (eventually as much as 6000 lbs per annum) from his farm, and later also wheat.
"In 1817 he took out £12,000 mortgage (now equates to $17,000,000 on average wage data) on an impressive list of properties.
"They included a stone windmill built to support his baking and brewing business."

"Around 1819-1820 significant cracks started to appear in Clarkson's business empire.
"In 1819 he had built a paper mill, and the following year the beautiful Eschol Park House, at a cost of £1,500 (now a restaurant and function centre, about 5km north-east of present day Campbelltown). "However, in 1820, with the other Turnpike bondsmen — in turn having died and absconded — a suit was issued against Thomas for £1,000 in unpaid tolls.
"In 1821 Clarkson's wife, Catherine, was convicted of receiving stolen goods and sentenced to five years transportation, although it’s not clear whether she served any of the sentence.
"Three years later, Thomas died in Hunter Street Sydney.
"The first writ to recover debts from his estate was issued two weeks later.
"Catherine commenced a legal fight to preserve the property she purchased in 1806 from the estate's debts. However, ownership of this property, free of Clarkson's debts was not finally established until 1836, Catherine dying some three years later." 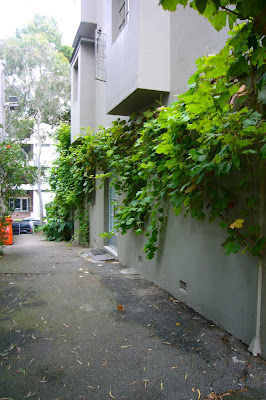 POSTSCRIPT:
“If Only”, an online life of Thomas Clarkson, by Christine Woodhead, Marlene Willcocks and Margaret Aitken can be found here.
The first two authors are stated to be direct descendants of Clarkson.

*
SOURCES:
National Library of Australia
Trove
City of Sydney Archives
Dictionary of Sydney
State Library of NSW
Bones in the Belfry
Posted by Unknown at 12:00 AM

Wonderful windmill story and I particularly like the history of street names so this post was a double delight for me.

I've always thought it amusing to think of a row of windmills along the ridge in Darlinghurst. Clarksons Mill Way is the only street-name reference to the mills I have heard of that survives today. Thanks for providing the background story to this small lane.