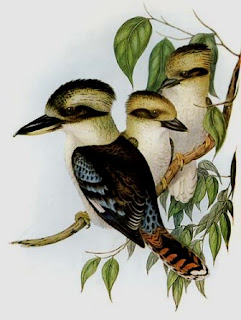 I have good memories of the Kookaburra Kiosk, which once occupied the shopfront at 112A Burton Street, across the road from the National Art School.
I first visited the vintage clothing store in the 1990s when it was run by Sally Hammond, who established the kiosk around 1975.
Hammond, a friendly dark-haired brunette who always wore red lipstick, kept a first-class collection of vintage dresses from the 1920s-70s, all impeccably dry-cleaned and displayed.
The prices were quite high for my meagre budget, but I do remember buying a classic black '50s handbag with a clasp, which I dragged around for years until it fell to pieces.
I'm sure I remember hearing that Hammond used to loan some of her clothes to big-time filmmakers, such was the quality and authenticity of her collection.
Hammond sold the store around the turn of the century and sadly died earlier this year.
Kookaburra Kiosk was then run by a young woman who was quite eccentric and always fabulously and colourfully dressed. She kept a different kind of stock that was less collectable but much cheaper. I was a frequent visitor to the store by then and befriended the woman but I have scratched my memory and can not remember her name!
Fortunately I do have some photographs that were taken around 2005-07.
Here is a picture of the woman without a name but a lot of style: 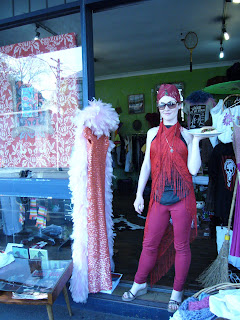 Her then boyfriend worked as a chef next door at Recess Cafe and I think she is holding up a plate of food he has made for her.
This next photograph was taken on another lovely Darlinghurst summer day when I brought along sparkling wine and glassware for us to celebrate life. The woman on the left was a friend of the Kookaburra Kiosk woman. They are both whistling for some reason. 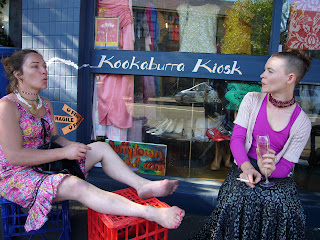 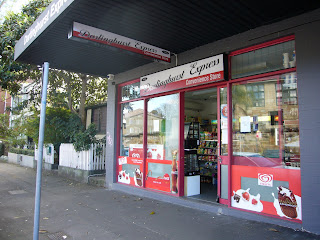 I was walking past the old KK site last week and noticed this painted calligraphy on the wall of a doorway in the same small block: 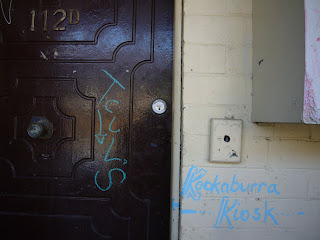 So perhaps the Kookaburra Kiosk lives after all?
Posted by Unknown at 9:57 PM

love your post. the woman's name is mel. death to all quickie marts!

Thanks for solving the mystery!

Sally established the shop a decade later, in 1985, and yes, her collection was used in different film productions. After she sold kookaburra she than ran a costume hire shop on Oxford street.