Across the Border: Kings Cross: Club Swans and the Astoria Hotel 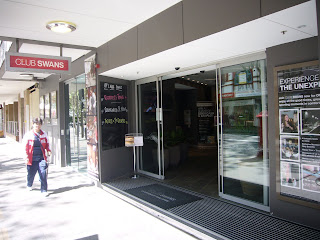 I had time to kill in Kings Cross today while waiting for some photographs to be printed and it's at moments like these, I'm glad I'm a card-carrying member of Club Swans: 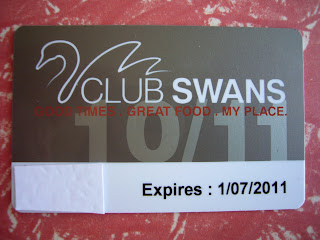 Club Swans: Good Times. Great Food. My Place.
I have only ever watched one game of AFL in my life and that was a couple of years ago when my friend won a box seat at the Australian Cricket Ground at Moore Park and we drove there in a vintage Holden. Mad, bad Barry Hall was still on the Sydney Swans team and he was such an amazing and fierce player, moving across the field with stealth and grace . . . oh, what do I know? The only thing I really liked about Barry was that he was big, tall and bald, which meant he was easy to spot on the field and I could confidently yell out, ''Go, bad Barry!'' when he had the ball, knowing for certain I at least had something right about the game, because typically, it was only by the end of the match that I finally understood the rules.
Interestingly, after the players had run off to their change-rooms, a bunch of Buddhists in orange garb started walking across the field and someone screamed out, ''It's the Dalai Lama!'', so we all started taking photographs of this small orange dot-man in the distance. The Dalai Lama was in the country at the time, so maybe it was him. He might be a friend of bad Barry.
Anyway, AFL is not why I joined Club Swans, at 28 Darlinghurst Road, on the strip in Kings Cross. The reason I pay $10 each year to be a member is because they have the cleanest toilets in the cross: 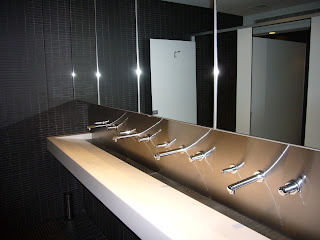 See how they sparkle? They are always clean, stocked with soap and paper towels and another nice touch is that music is piped into the room. I recommend everyone who frequents Kings Cross should become a member and then you can use the pristine bathroom whenever you like, without wasting time signing in. Show your support for the team.
Sadly Club Swans was closed for much of this year - and the bathroom was unavailable - when the building's roof was torn off by a February storm that also caused the ceiling to collapse at neighbouring drinking-hole The Bourbon (formerly known as The Bourbon and Beefsteak). But while Club Swans efficiently mended itself and re-opened in June, The Bourbon is still boarded up, disappointing many of its regular drinkers.
Club Swan's other great asset is the sun-catching deck on level one where today I enjoyed a lemon-lime and bitters ($2.80): 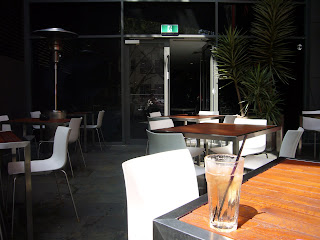 If the sun is out, the deck is always bathed in its rays and if there is a storm on the way, it's a great place to watch it roll in - or perhaps run for cover. But the deck is also a good vantage point for spying on people on the street below, and even better for watching the curious goings-on at the Astoria Hotel, at 9 Darlinghurst Road, across the road. I took this picture of the hotel from the deck today: 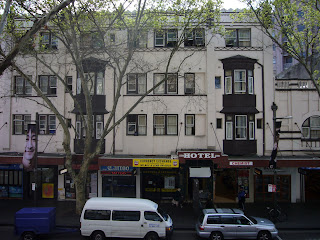 The Astoria Hotel is a mysterious place and I wonder about its marketing techniques because it manages to attract a diverse clientele, from German tourists and Japanese businessmen to prostitutes and junkies. A pay-phone is suspiciously located right outside the Astoria's entrance. It is fascinating to watch random people slip in and out of its shady doorway. Who are they and why are they going in there and coming out just minutes later?
It is also great to try and see through the windows of the hotel, especially at night when the lights in the rooms may be on. Then you can catch a glimpse of someone's profile as they move about inside, or see a flash of arm as they go to close the curtains because they have had enough of that weirdo pervert at Club Swans.
I also wonder if some people actually live permanently in the Astoria Hotel. If you look closely at this picture below you can see a pile of books in the smallest window: 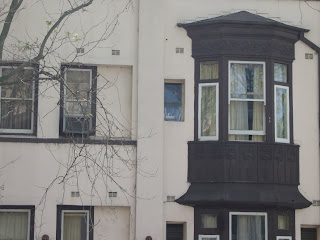 Fiction or non-fiction? And who do they belong to? A permanent resident or just a traveller who happens to like reading? I have my theories, but I'll never know for certain and I quite like it that way.
*
Club Swans
28 Darlinghurst Road
Kings Cross NSW 2011
02 8061 2300
www.clubswans.com.au


UPDATE: The club was placed into voluntary administration on May 17 and ceased trading. The story I have heard is that the building has been purchased by the owner of the neighbouring Bourbon, which has been closed due to storm damage for almost two years. Apparently the new owner is going to convert the two buildings into a ''super-club'', similar to Justine Hemmes's The Ivy building in the Sydney CBD.
This statement was posted on the Club Swan's website in May:


''The Board of Directors of the Sydney Aussie Rules Social Club Limited (trading as CLUB SWANS) advises that the Club was placed into voluntary administration on Tuesday 17 May 2011. The Club has experienced difficult trading conditions since the storm damage occurrence in February 2010 which caused the Club to forcibly close for a three month period.
''Additionally, the Club's landlord has sold the building with settlement due to occur on 31 May 2011. Disappointingly, the Club has not been successful in negotiating a new lease with the incoming landlord and accordingly the Board appointed Ferrier Hodgson to administer and manage the affairs of the Club.
''Under the terms of its lease the landlord was to provide vacant possession on the settlement of the property which left the Club to negotiate with the incoming landlord however, the Club was not able to do so on satisfactory terms leading to this event.
''Following a review of the financial position of the Club and viability of the business, the voluntary administrators took the decision to cease trading the Club from close of business on Wednesday 18 May 2011.
''The Board would like to sincerely thank the management and staff for their dedication to the Club and to the members for their excellent support and would also like to thank the suppliers to the Club for their past services.
''Any enquiries should be directed to Ferrier Hodgson:
Ferrier Hodgson
GPO Box 4114
SYDNEY NSW 2001
Tel: (02) 9286 9999.''
Posted by Violet Tingle at 1:19 PM

Violet please make a cartoon too

I am pretty sure the Astoria is featured in Dobell's work here http://cs.nga.gov.au/Detail.cfm?IRN=17376

This blog is a fantastic resource by the way. Great work!

Thanks Darian. I love the Dobell: looks so European. I wonder what the little tower on the end of the building, to the right is. It looks a bit like the tower of the Kings Cross Hotel.

The Astoria restaurant ( not affiliated with the hotel) had the best food in the cross, and a lot of the staff from the Bourbon and beefsteak used to eat there much to the ire of their employers.
The "mchistory" on the footpath is in the wrong place, the restaurant used to be where Parkers pharmacy is now.
God I miss it.

I worked there when I was 18 as a waitress. I worked with Helen the niece of the owner and knew everyone in the Cross. It was a great restaurant