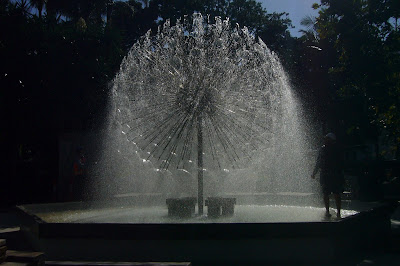 Isn't the El Alamein Memorial Fountain just the most beautiful thing?
The 52-year-old fountain is an engineering marvel, an internationally known landmark of Kings Cross and creates a wonderful sense of calm and feeling of awe at Fitzroy Gardens.
I, like so many residents, visitors, photographers and tourists to the Cross, have long admired its presence: the sound of its water falling into the pool below, the wet spray that envelops you when you walk by on windy days, the droplets glistening in the sun and the perfect orb of H2O created as if by magic. 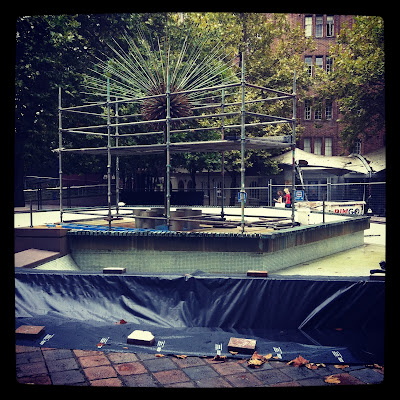 But the much-loved fountain has been surrounded by scaffolding since early this year and I have longed for its return, which is why I am over the moon about it being switched back on this Saturday at 10.30am.
Do not miss this historical moment when the taps are turned on and the fountain springs back into life. 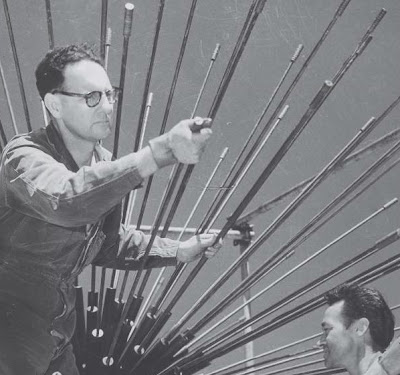 The fountain was designed by architect Robert Woodward in 1959 for a design competition by the then Sydney City Council. Woodward did it mainly as a creative project, to push his discipline, and it must have been fantastic for him when he won the prize.
The 211 wands that make up the fountain's dandelion-style shape were manufactured, in what must have been a fairly monotonous process, by metalworker Eric Williams (pictured above left with foreman George Bushnell, right). 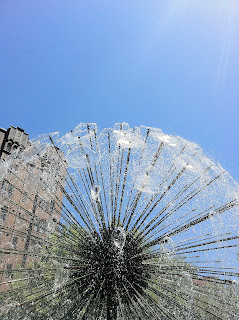 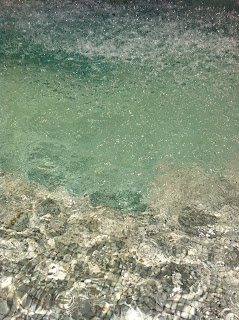 The fountain is actually a war memorial, and was erected in commemoration of the battles of El Alamein during World War II.
Australian soldiers of the Ninth Division fought near the Egyptian town of El Alamein and these two battles helped turn the course of the war towards victory for the Allies.
Woodward himself was a World War II veteran so he obviously put his heart into the design.
Rather than commemorating lives lost by Australian troops, the El Alamein Memorial Fountain celebrates a victory, and so rather than being a solemn memorial, it bursts forth with life and vitality. 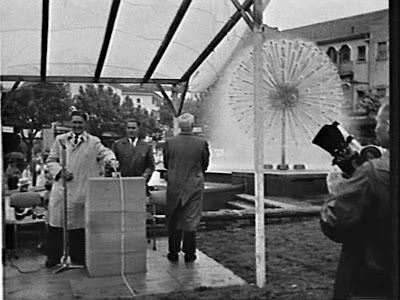 After the fountain was officially opened in 1961, by the then Lord Mayor Harry Jensen, Woodward was catapulted into international fountain-designer stardom and he duly changed careers, setting up a private practice to focus on his new specialty "making art out of water".
(By the way, I love that chap in the photograph above who has his back to the camera. It's like he can't be bothered with all the pomp and ceremony; he just wants to admire that fountain.)
Woodward's design was copied around the world and even ended up in mail-order catalogues, where you could purchase your very own dandelion-style fountain.
But they never had the same quality or effect as the original.
Of working with water, Woodward told Hazel de Berg in 1972:

"I like water very much, it's a fine medium to work in, a little difficult of course, one can't put it in a lathe or shape it as you do with metals, or forge it or cast it, but those difficulties themselves are what give it its main charm . . . it has form, it has transparency, it reflects light, has movement.
"It has constantly changing form, although one can control it." 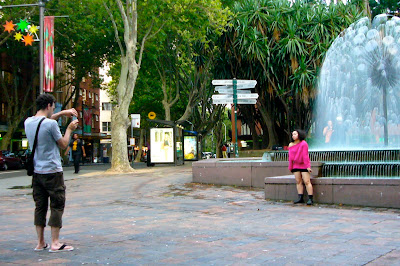 Woodward was also commissioned to create numerous replicas of the fountain including one in Malaysia (since dismantled) and three in the United States.
One of the US versions was made for the headquarters of Tupperware in Florida and also became the company's logo.
In a 1996 interview with Paul and Susan Johnson, Woodward talked about how he created the fountain specifically for the site - remember this was before the Fitzroy Gardens were landscaped by Ilmar Berzins in 1969.

"I would go to Kings Cross and look at it, both in the day and at night, and realize that as you walk down the street and look backwards, traffic blocked the view.
"It needed to be high enough to be seen above cars and, luckily, people's eye line is just above cars.
"The fountain needed to be seen from three different streets and the streets were different in those days - it needed to be a three dimensional thing.
"I suppose the first idea that came to me was a ball of water and even the word itself seemed an appropriate thing of Kings Cross.
"Fairly quickly my design evolved to form a dandelion. Of course the presentation method was difficult because how do you present water? I did that by going to Kings Cross and taking photographs of the site and then blowing them up and making a montage. I even used an old photograph of a dandelion in a montage.
"Having the water in the air like that, a long way above the footpath, I used the contours of the site to create a pool just above the highest contour.
"Then by setting it off to one side a certain amount, I had the chance of repetition once again.
"The steps and the detail in the stonework repeats all the way down, but there is organic freedom in it, in that they are not all the same size and the pools shorten. It just grows in that fashion and the site dictates most of what happens." 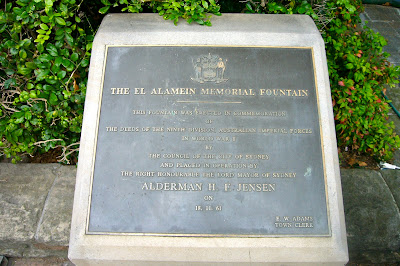 The plaques from that opening ceremony in 1961 are still there today, as they should be, but after five decades the fountain was not in the best condition.
Many of the tiles in the surrounding pools were chipped or broken and had been replaced over the years by inferior copies. The wands were also clogged by years of dust - and washing-up detergent - and were not spraying as well as they should. Not to mention the water that would leak out onto the surrounding pavers.
The City of Sydney began working with Woodward on how best to restore the fountain to its original glory, and following his death in January 2010, that consultation continued with his family, including his widow, Margaret Woodward. 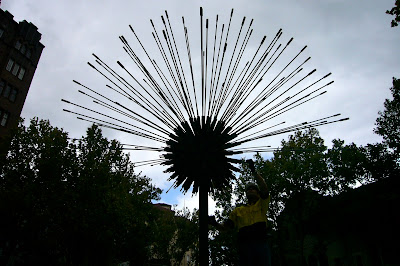 The restoration began in February this year and since then the site has been surrounded by scaffolding. I have been following the project with much interest and have even been lucky enough to be let through into the construction site to see how it was progressing. 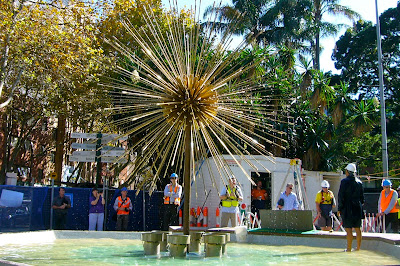 The restoration project included the manufacturing of new wands and this task was given to the original fountain metalworker's son, Denis Williams.
He remade the 211 wands, just like his father did five decades earlier.
It was a much simpler process for Denis, who had the aid of computers, but it was still a nerve-wracking process for him, especially on the night before the 211 wands were due to be screwed back into the ball, and the water switched on for testing. 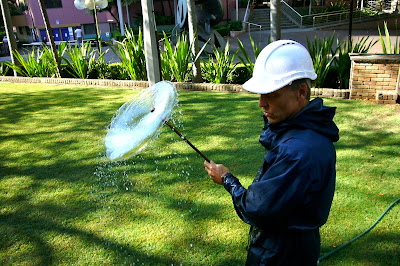 Before installing each wand, Denis Williams (pictured above) tested it with a hose to ensure the water flowed through properly. 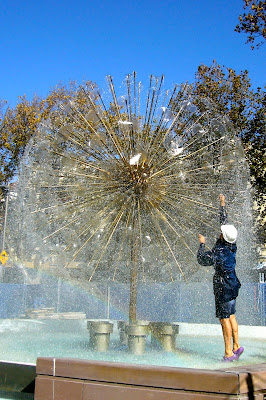 And then once the wands were in place, he had to go around and check it all again, making sure the water came out of each wand with the correct pressure in a perfect circle.
I'm told, by sources close to the fountain, that the water tested again, now flows in a perfect globe and that is far superior to how it appeared before the restoration began. I suppose now it will look just as it did in 1961 - and I can't wait to see it. 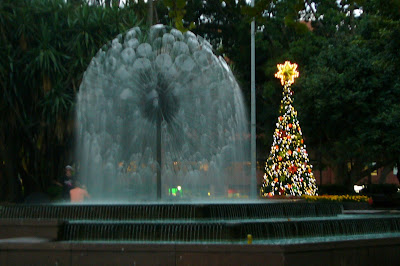 Years after the fountain was opened, Woodward still gained attention for his Kings Cross jewel. In a 1978 article about Woodward in the Bulletin magazine, journalist Carol Henty wrote:

When the day before the official opening came Woodward and his wife Margaret took their old friend, the sculptor Lyndon Dadswell, to see the first test.
It was a Sunday night in November. They heard the rushing water, then, above the hoarding they saw it, alive and alight. Dadswell burst out: 'Oh Bob, I wish it was mine'.
Woodward says: "You can know, of course, that it's going to work. But until you press the button you never know whether it will have that extra touch of magic." 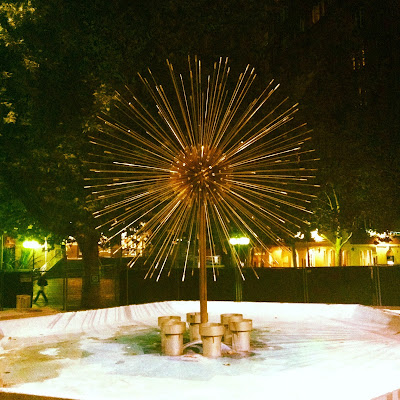 Firstly. Welcome Back, sincerely and honestly you were missed.

Your latest article is magnificent, and raises the bar for journalistic excellence. Indeed your whole Blog tugs at my heartstrings and makes me realise just how much I miss the area.

Great photos especially the original opening ceremony with the gent ignoring the proceedings and just admiring the fountain. "An honest man" as Diogenes would say.

Just a dream but a nice one,if your Blog could have a limited edition printing it would be the sort of thing Heads of State would give to each other during visits. I know it's not gonna happen but you deserve some sort of Honour like we used to have.

I would have loved to attend the new opening ceremony but Clover would have been the recipient of a well aimed tomato or two, so I'll desist.

I would like to say that I am very pleased that Violet is back as well. I look forward very much to reading her informative little stories and I hope she will keep it going for as long as possible. I missed them very much during her long silence