Darlinghurst Blog: Apartment Buildings: The Statler and The Hopes 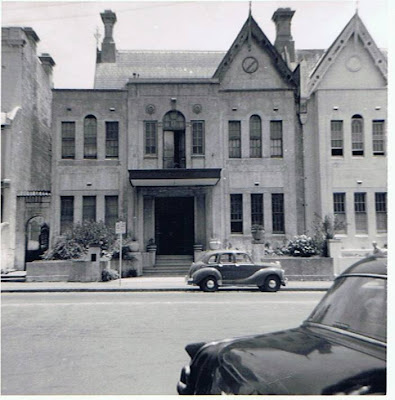 This photograph, taken in 1964, is an absolute gem. Not just because it is a rare historical photograph of The Statler and The Hopes apartment buildings on Darlinghurst Road, but because there is a personal story behind it.
It was sent to me by a woman named Barbara, who lived in the house, from her birth in 1951, to her marriage in 1969.
The car parked out the front belonged to Barbara's father.

"I still have memories of waiting at the bus stop outside the flats, for the 312 to take me to school at St Vincents College," Barbara writes.
"I remember the coke man delivering coke to the cokehouse out the back and stoking the boiler, and the ice man delivered blocks of ice to each flats' door, where it stood in a puddle until you brought it in and put it in the ice-chest.
"We've come a long way since then." 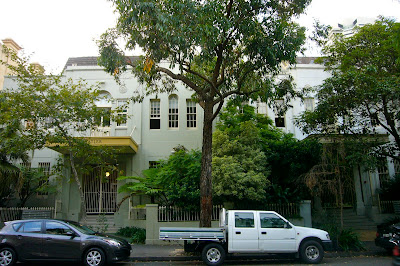 These days, the grandeur of the twin buildings (The Statler on the left and the The Hopes on the right), is obscured by trees, and passing by you would rarely notice the intricate details of these 19th century buildings, which were once grand homes belonging to the Docker family. 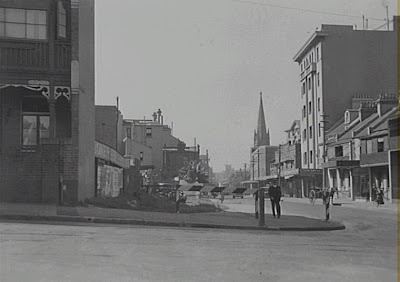 This 1935 historical photograph (above) looks north down Darlinghurst Road, with St John's Church on the right.
To the left, you can see the chimneys of The Statler and The Hopes, and perhaps, just faintly, you can see the whisper of an outline of the decorative metal finials atop the building, which are still there today. 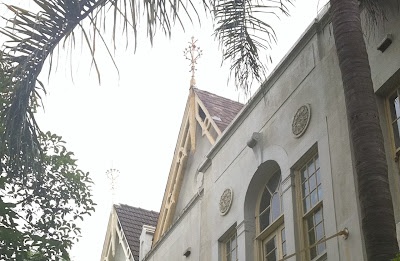 Barbara's parents moved from a hotel on Oxford Street, to The Statler in 1948.
"Growing up I had heard rumours that it used to be the home of one of the 'hanging court judges'," Barbara writes.
"Recently my husband and I noted one of the real estate agents advertised it as having been built as a home for the sisters at Saint Vincent's Hospital, however the inside indicates that it was built as a large private home.
"From our research to date it seems that The Statler and The Hopes, next door, were built as homes at the same time around 1880, after the southern end of Darlinghurst road was redefined.
"The Hopes appears to have always been the Hopes, then 99 Darlinghurst Road (now 251-255 Darlinghurst Road).
"The Statler was originally 'Nyrambla', and 101 Darlinghurst Road (now 257-261 Darlinghurst Road).
"Both were owned initially by the Docker family." 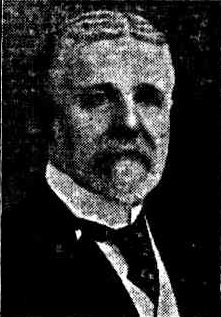 "Nyrambla (now The Statler) was owned by Wilfrid Lawerence Docker (1848-1919; above) and his wife Ada Mary Lord (1851-1917), who married in 1875 and by 1882 were living at the house," Barbara writes.
"It seems they had no children. He was a banker and accountant, and both were very strong members of the St John's Church community.
"One of the Houses at SCEGGS was named after Wilfrid, who was first treasurer of the School Council (1895–1919)."
"The Hopes was owned by his brother Arthur Docker."
The excellent Trove website backs up Barbara's research and sheds even more light on the Docker family. Firstly, it seems that Arthur was based in England, so perhaps let out The Hopes to another family.
Secondly, I think Wilfrid and Ada moved into Nyrambla in 1884, because in July of that year there was an advertisement in the Sydney Morning Herald for a clearance sale at Nyrambla, "the residence of Mr George Mair and former residence of Mr Charles Fairfax". 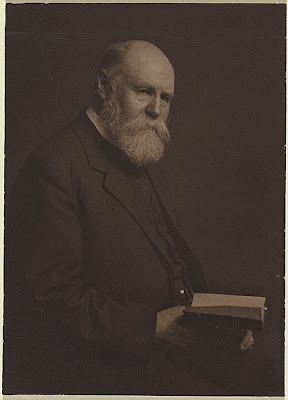 There was also another Docker brother called Edward Hay, who was an orchardist based in Parramatta.
But the big wig among the four Docker brothers was Ernest Brougham Docker (above), who was a District Court Judge for 38 years until his retirement in 1918. This photograph was taken in 1909 by pioneering photographer Harold Cazneaux.
Judge Docker lived at Elizabeth Bay until his death in August 1923. His funeral was held at St John's Church and a report of the event, and tributes to him, were published in the Sydney Morning Herald.
The "Girls' Friendly Society" mourned his loss and according to the Herald, "earnestly prayed that his great example might inspire younger men".
Judge Docker was also an amateur photographer and the State Library of NSW has in its collection, an album of photographs taken by the judge and his father, Joseph Docker MLC (1801-1884), who held the positions of Postmaster-General and Minister of Justice in the NSW Government. 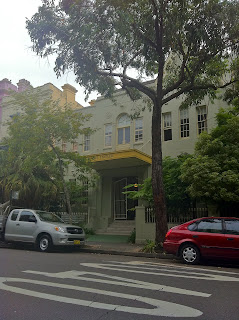 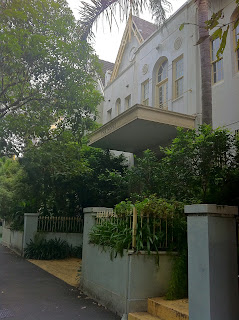 Back at The Statler and The Hopes . . . after Wilfrid's death in 1919, both Nyrambla and The Hopes were converted into flats.
Barbara delved into the rate assessment books and found that by 1930, The Hopes was being called St Pancras flats, while in 1945 and 1948 it was known as Fernleigh.
I can find no trace in Trove of either of these names in Darlinghurst, but I did find St Pancras mentioned in this old City Surveyor's map, which I came across at the City of Sydney Archives a year or so ago. 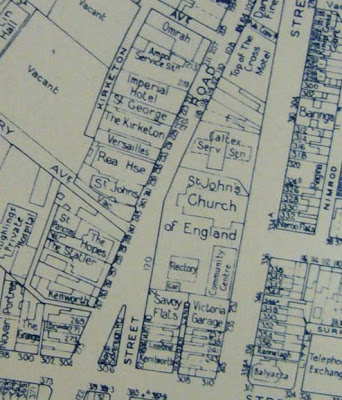 It clearly shows St Pancras sitting at the rear of The Hopes. I suspect it was an addition that was put on in the 1920s or 30s, which formed this courtyard (below): 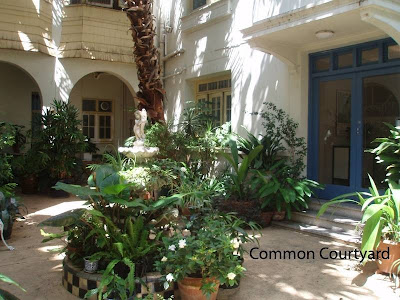 St Pancras would be the one with the blue door, while the early-Victorian era The Hopes is the cream building on the left (picture from a Richardson and Wrench Bondi Junction advertisement). 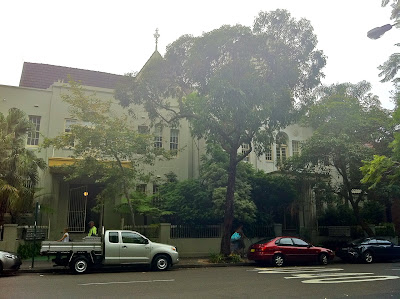 The two buildings had a colourful owner in the 1930s: Samuel Curotta, a Sydney man who made "large sums of money" through city and suburban property deals.
Curotta was raking in 109 Pounds a week through rent at The Hopes, and probably just as much from The Statler. He also owned the Omrah Private Hospital, just down the road on the corner of Farrell Avenue (now the Altamont Hotel): 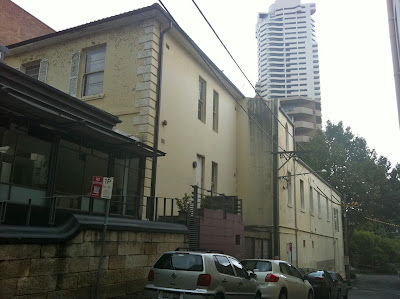 According to the Sydney Morning Herald, Curotta appeared before the Registrar in Bankruptcy in August 1933, with secured debts of over 30,000 Pounds and unsecured liabilities of 7,546 Pounds.
His estate was valued at 143,750 Pounds, so he wasn't in too much trouble, but he did have to explain the reason why he had 2000 Pounds stashed in a locker at his home.
"Making money was no trouble to us," Mr Curotta said.
"My position was good, but the banks were crook."

*
SOURCES:
Barbara, former resident of The Statler
Trove
City of Sydney Archives
State Library of NSW
Posted by Violet Tingle at 12:00 AM

Excellent! Just to be a bit pedantic, I think you find the corect spelling is St Pancras (as in the London district of the same name....and just near Kings Cross there too if I remember rightly)

Thanks for letting me know! It's fixed now! I did actually spell in correctly when I did the Trove search; my brain must have just misfired in the transcription. VTx

That was a great read ... I own one of the flats ther and have done so for 12 years .. renovated and lived there until 2006 ... loved it, loved the "memoirs from a window" Thanks for the history! SR

Thanks for the information on these buildings... my maternal grandparents lived in one of the flats (I believe in what is now 'The Statler' side) in the mid 1930's. They had met one another at the Imperial Hotel in 1931 (now the Westbury), married and moved into one of the flats a few years later.

Thanks for a very interesting read. I live in the area on the other side of St Johns Church and have always found the history of the area so fascinating.

Hi,
I have been enjoying exploring your blog. My parents lived in the Statler Flats in the late 50's when I was born and I love the old photos of the building. I wonder if you have ever heard of the Arabia Coffee Lounge. The Arabia was by all accounts I place where lots of bohemian types - writer, artists, and musicians along with many Jewish refugees met and talked. My mother who was a young nurse and my father who was a Jewish refugee who came to Australia on the infamous Dunera met in the Arabia Coffes Lounge in the Cross.
I would love to get hold of some pictures of the Arabia.
Thanks for your great blog