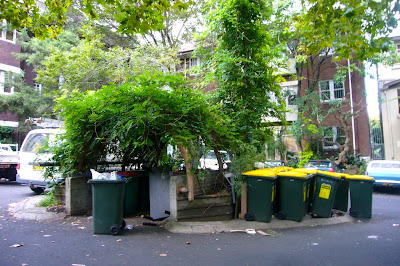 This Saturday there's going to be a rally in Royston Street to protest the proposed demolition of the arced garbage bin cover that forms a turning circle in this little street.
The "refuse container" was built in the early 1980s to house garbage bins for the many apartments in this street and is covered in a 31-year-old Wisteria vine.
Apparently the City of Sydney council wants to demolish the "refuse container" and build a new structure to house all the bins.
I received a flier in my mailbox this week from the Darlinghurst Action Group (DAG), who are organising the rally on Saturday April 7, from 11am, to protect this "important landmark and valuable piece of Darlinghurst's social and waste history". 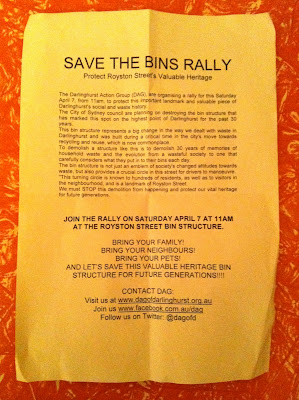 The DAG, a coalition of residents from Royston Street and surrounding streets, go on to say that "this bin structure represents a big change in the way we dealt with waste in Darlinghurst and was built during a critical time in the city's move towards recycling and reuse, which is now commonplace."
"To demolish a structure like this is to demolish 30 years of memories of household waste and the evolution from a wasteful society to one that carefully considers what they put in their bins each day," the DAG writes.
"The bin structure is not just an emblem of society's changed attitudes towards waste, but also provides a crucial circle in this street for drivers to manoeuvre.
"This turning circle is known to hundreds of residents, as well as to visitors to the neighbourhood, and is a landmark of Royston Street." 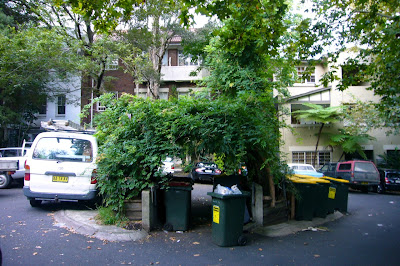 I didn't really think much about the bin structure, but after delving around on the valuable Trove site have learned that in the late 1970s, during the early green movement, there was a community campaign from Royston Street residents for better waste sorting and removal. 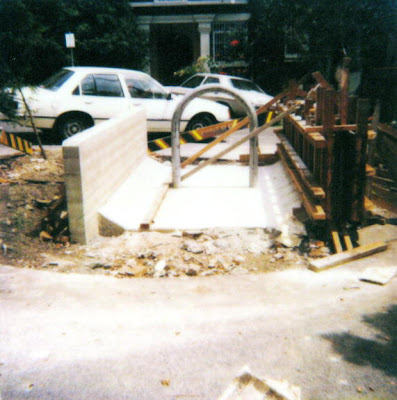 By the early 1980s, work had begun on this important waste structure.
Designed by council architect and engineer John Aubrey, the structure was designed to be a turning circle for the street while also providing a practical area for the management of household waste.
The curves of the arched gazebo, which was to be covered in Wisteria vines, were designed to mimic the curves of the Arc De Triumphe in Paris, which Aubrey had visited as a child. 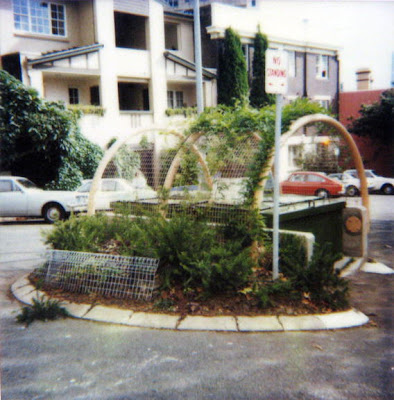 The initial budget for the project was estimated at $20,000, but in February 1981 The Sydney Morning Herald reported that costs had "blown out on the project due to a labourers' dispute".
The then council took the labourers to the NSW District Court in order to escape their contractual obligations so that work could be finished on the project.
The matter was settled out of court and in April 1981, The Herald reported that the project was finally completed at a cost of $35,000.
For 31 years, Aubrey's waste management structure has serviced the hundreds of residents that have come through Royston Street.
The council timeline to demolish the structure is set to begin in June 2012. 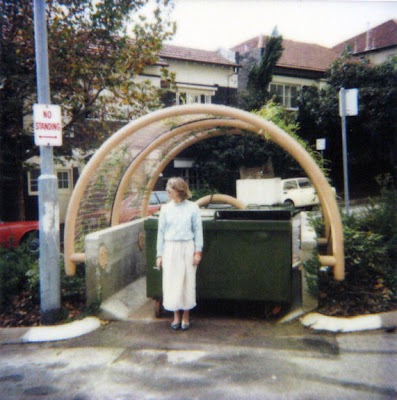 John Aubrey's wife, Jan, poses next to the completed structure, known as the Arc De Triumphe of waste disposal in April 1981. Source: City of Sydney Archives.


The Save The Bin Rally is being held this Saturday, April 7, from 11am.
For more information, visit the DAG website here.

*
SOURCES:
City of Sydney Archives
Trove
Posted by Unknown at 12:00 AM

Email ThisBlogThis!Share to TwitterShare to FacebookShare to Pinterest
Labels: History, Royston Street, Save The Bin Rally

Violet, having seen many a rat scurry from the Royston St bins I was curious who in their right mind would want to save them! But your photos showing the original set up do remind me they are not without their charm. Happy Sunday!!

Dear Mr? Council,please leave my bins alone. No one asked me if they could be rehoused, they're happy in the sun, and lovely shade.
P.S. I am in my right mind, thank you.

Ralf is not amused.

Ralf! What is with your new pale pink and diamante collar? Bit of a daring fashion choice for a Tom cat.

It wasn't my choice, but I have to wear it or I'd be naked.

Soon to be evicted Rat. said...

Wow. What an inspired design. The "Arc de Triomphe" no less! Must be the "Paris end" of Darlo.